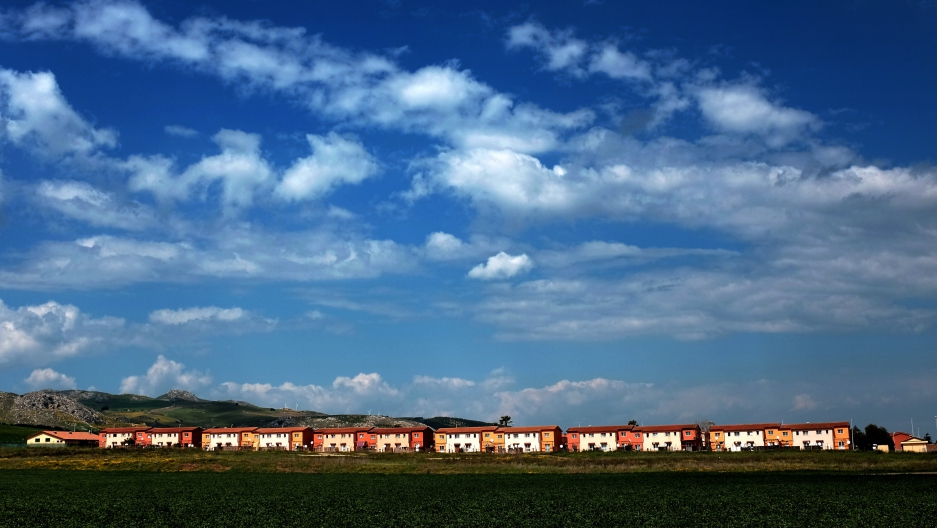 About 3,200 migrants from North Africa, Ivory Coast, Pakistan, Syria, Afghanistan and other countries are staying at the Cara Mineo complex, a hosting center for asylum seekers in Catania, Sicily.
Credit: Alberto Pizzoli
Share

Editor’s note: Names in this story have been changed to protect the identities of vulnerable people.

CAIRO, Egypt — On the day Abu Khaled heard that 700 people had drowned crossing the Mediterranean from North Africa to Italy, his wife and two daughters were at sea. He was terrified, glued to the unfolding horror all day on television.

“I was so afraid. I only calmed down when I heard that the boat had left from Libya,” he says. His family, Syrian refugees, had departed from Egypt.

Getting on a smuggler’s boat is easy, Abu Khaled explains; there are brokers everywhere. Abu Khaled’s wife booked passage for herself and their daughters with a broker she met through picnics with other Syrian women. “You can find them at Caritas [a Catholic NGO that provides services to refugees], at the grocery store, everywhere you find Syrians you will find brokers, and people won’t mention names because they’re other Syrians who help them,” he says.

A safe arrival in Europe is harder to come by. But would-be migrants remain undeterred from making the perilous crossing from North Africa to Europe, despite the frequent deaths along the way. While many of them fled conflict or persecution in their home countries, life in Egypt is also difficult — assistance is limited, and refugees contend with widespread discrimination and racism.

If it weren’t for his medical condition, Abu Khaled says he wouldn’t hesitate to get on a boat. He has a bullet lodged in his cheek and a tension bandage wrapped around his torso. His organs are severely damaged from five gunshot wounds. The injuries are from when he was still in Syria — the work of a militia affiliated with Syrian President Bashar al-Assad, he says. He was halfway through an emergency surgery when another militia arrived to finish him off. His doctor, who was also his brother, managed to get him out and take him to another hospital where he spent two months in intensive care.

Later, he was arrested again by the regime and spent four months in jail, where he was tortured. Eventually he escaped to Lebanon, but there he heard that Assad’s militias were still looking for him. So he escaped again, this time to Egypt where he is a recognized refugee. He breathes and moves with difficulty.

It can take many tries to succeed at getting to Europe from North Africa, but refugees say the life they imagine across the Mediterranean is worth the trip.

Anas’s family has finally made it after more than a dozen tries. The Syrian, who has his name roughly tattooed on his arm, attempted the journey with his wife and four daughters 11 times, making it onto the water twice. His family tried two more times without him. On the 13th trip, they finally got across. “I was bad luck for them,” he says.

Now that they are in Europe Anas hopes his family can have a better life. But life alone in Egypt isn’t easy.

“There’s nothing left but memories,” he says.

Abu Ahmed, from outside Damascus, left Syria after a bomb went off next to the institute where his son was studying. Now he hopes to cross the Mediterranean with his family.

“Of course I’m scared,” he says, “but it makes no difference, a slow death here or a sudden death [at sea].”

There is a deal with the smugglers — if you can recruit 10 people, you can send one more for free. Abu Ahmed’s wife has found five so far. “It’s in God’s hands,” she says. “If it’s written it’s written, I’ll die a martyr and it will be a dignified death.”

More from GlobalPost: Meet the Tunisian fisherman saving the lives of migrants at sea

Of course, it’s not just Syrians risking their lives to attempt the voyage.

Soraya and her family are refugees who arrived in Egypt from Darfur in March 2013. Alone with four children under 10, she worked cleaning houses to supplement the $100 she received from the United Nations Refugee Agency every month, which covered only her rent. Then the assistance stopped. Then she got sick, and could no longer work enough to cover the rent.

Her landlady sent thugs to extract the money from her. They sexually assaulted her in front of her children.

After that she and her children lived on the street. They tried to leave for Europe once — her brother was taking a boat from Egypt and paid her way. But early in the journey the boat broke down. They drifted for seven days before being picked up by the Alexandria police.

Soraya and her children, recognized refugees, were allowed to stay after spending a month in the police station. Her brother was sent back to Khartoum. “From the day he went back to Sudan I have no idea what’s happened to him, no telephone call, nothing.”

Crossing the sea is now a fate she only dreams of. Those who can go are the lucky ones. “I can’t go because I can’t pay,” she says.

She says she has contemplated suicide.

“I want God to take me and my children suddenly, what are they guilty of? I think death is more merciful than life.”