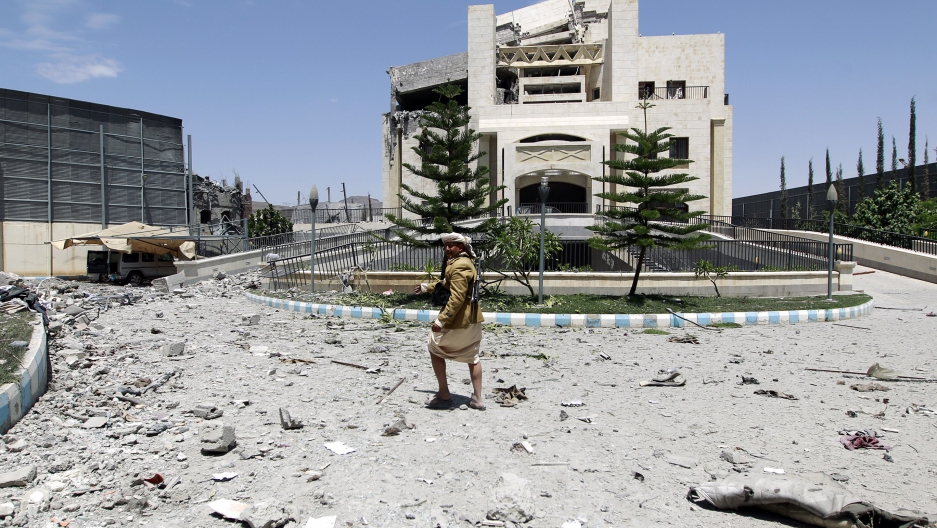 The week leading up to the ceasefire was the bloodiest one yet, and there’s not much evidence to suggest the truce will hold.

Just hours before it went into effect, three airstrikes hit a Houthi base north of Sanaa, killing 90 and wounding 300, according to Yemeni state television. The United Nations says more than 800 Yemeni civilians have been killed in the Saudi air campaign, which began in March. Nearly 200 were killed in the last week alone. At least 12 civilians have died in Saudi Arabia from strikes by pro-Houthi sources this month, according to Human Rights Watch.

The Houthis say they are victims of Saudi and American aggression, while the Saudis say the Houthis are a volatile group supported by Iran. Independent observers who follow the conflict closely, however, disagree. They say the Houthis do not take orders from Tehran. They are instead mainly driven only by local concerns.

Following the peaceful 2011 protests that — despite a vicious crackdown — led to the fall of long-time dictator Ali Abdullah Saleh, Yemen's various factions have been vying for power. The Houthis are one of them. The group, based in the country's north, began taking control of more territory almost as soon as Saleh was out. By September of last year they had reached the capital, forcing current president Abd Rabbuh Mansur Hadi to flee.

The Houthis have long distrusted Yemen's government for its cooperation with foreign powers like Saudi Arabia and the United States, two allies the group believes the country would do better without. Saudi Arabia thinks the Houthis are supported by its Shia nemesis — Iran. Few believe that Iran is calling the shots. But Saudi Arabia fears growing Iranian influence enough to launch a rare bombing campaign, driving one of the world's poorest countries further into humanitarian crisis.

It has also dragged other Sunni-majority Arab nations into the conflict. The UAE, Egypt, Morocco, Jordan, Sudan, Kuwait, Qatar and Bahrain — also worried about Iran — are supporting the Saudi campaign. The United States has provided intelligence and logistical support. The bombardment has accomplished almost nothing. The Houthis have not been driven back. The Saudi-friendly president has not returned to power.

On Tuesday, Saudi finally agreed to pause its punishing attacks and relax a naval blockade so that humanitarian assistance could get in, but only on the condition that the Houthis cease their efforts to expand control across south and central Yemen, and do not use the respite from the shelling to consolidate power.

The ceasefire may or may not last. But what is certain: this latest conflict has fundamentally altered the face of Yemeni society. Existing divisions have been aggravated by the airstrikes. Yemen is now split between those who support them and those who do not.

"Yemen is more divided now than at any other time in its modern history."

“I think on every level whether you’re talking about regional, religious, political, Yemen is more divided now than at any other time in its modern history,” says Adam Baron, a visiting fellow with the European Council on Foreign Relations. But “neither side wants to be the one blamed for screwing up the ceasefire,” he adds. “They both want to try to claim the moral high ground.”

Ismail Ould Cheikh Ahmed, the new UN envoy to Yemen, arrived in Sanaa on Tuesday. If he can initiate peace talks between the Houthis and the government in exile in Riyadh, the ceasefire may hold.

“It won’t hold unless there is some kind of political deal,” said Jane Kinninmont, deputy head of the Middle East North Africa program at the London-based Chatham House.

But neither side believes a ceasefire is in their strategic interest.

Richard LeBaron, senior fellow with the Atlantic Council based in Washington, said both are still pursuing unmet goals that a ceasefire could impede. “The Houthis have not consolidated their position completely and the Saudis have not gotten rid of them completely,” he said.

Another liability is that neither side has full control over the ground forces allied with them.

The Saudis have said that the truce is all or nothing — meaning if one group, anywhere in the very divided country, violates it, they will consider it null and void.

“There is definitely a risk that even if Gulf stop their actions you could have the Houthis or other militias spoiling the ceasefire,” says Kinninmont.

The forces opposing the Houthis inside Yemen are very divided, and not subject to centralized control. They range from former president Abd Rabbuh Mansur Hadi and what is left of the army, to Al Qaeda and the new Yemeni branch of the so-called Islamic State.

“I think the big question is … whether the Saudis and their allies have a political plan to address the Yemen situation in addition to their military plan,” LeBaron said.

Who will be in charge?

That's a problem because all of these groups need to be part of the peace process for it to succeed.

“You need to have some kind of government of national unity, you need to have representation of the various different factions including the former ruling party, the Islahis, which is the Muslim Brotherhood movement, the Houthis and the Hirak [the Southern separatist movement],” said Kinninmont. “They’re all major forces on the ground and if they’re not represented any one of them has the capacity to act as a spoiler.”

“The chances of ongoing civil war or the fragmentation of the country are higher than they have been," Kinninmont said. "This is why there’s been during the more peaceful transition period such a focus on trying to work out some kind of federalism that’s probably the only possible solution."

The protracted bombing has seriously deepened the rift between Saudi and Iran. As recently as September, the foreign ministers had discussed cooperation to combat the Islamic State.

“But when events blew up in Yemen, the Saudis saw that as being directed by Iran so they saw it as a sign of very bad faith on Iran’s part,” Kinninmont said. “The Saudis are also using it as a show of force against Iran, and that means that for them they need some result where it can appear they have won.”

But both Saudi and Iran have reasons to deescalate. While it seems unlikely that the Houthis will be eradicated by airstrikes alone, a ground assault would become a quagmire from which it would be difficult for the Kingdom to extricate itself. And some of Saudi’s closest allies support the ceasefire.

“The US and the UK are officially supporting the Saudi operations but privately pushing for a ceasefire so their active policy is really quite different from stated policy,” said Kinninmont.

Iran, while it may have garnered more support within Yemen in response to the bombing, has reason to tread carefully.

“If I were an Iranian defense planner I would look across the Gulf and I would basically see Star Wars on the other side in terms of what the countries are deploying there,” said LeBaron. “Iran, in military terms, is badly outgunned.”

So in a country that just a few years ago was full of the promise of the Arab Spring, and the energy of a peaceful uprising, violence has now become the deciding factor for power. And by the looks of it, that will be difficult to overcome.