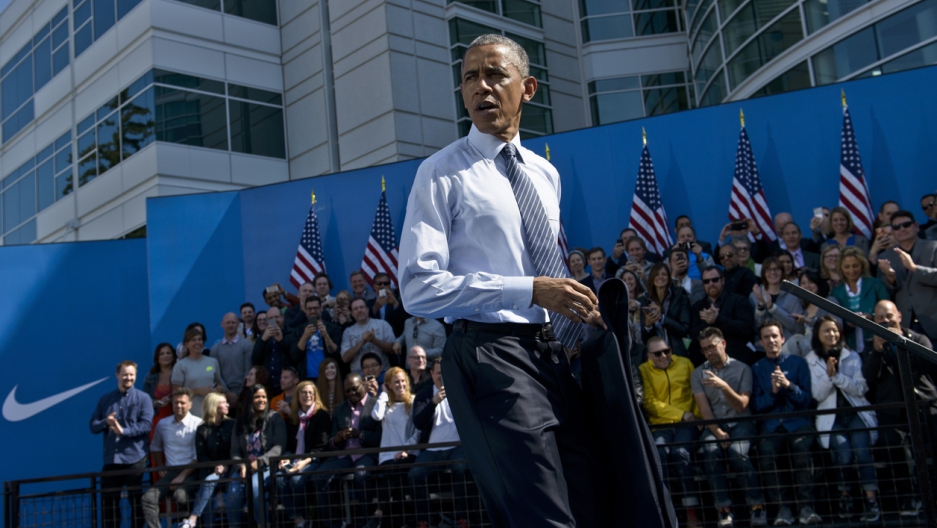 US President Barack Obama leaves after speaking about trade policy at Nike Headquarters on May 8, 2015 in Beaverton, Oregon.
Credit: Brendan Smialowski
Share

Today is a potentially transformative day for the global economy.

That's because the US Senate is voting on whether to fast-track approval of the Trans-Pacific Partnership (TPP), a massive trade agreement that would include the United States, Australia, Brunei, Canada, Chile, Japan, Malaysia, Mexico, New Zealand, Peru, Singapore, and Vietnam. That’s already 40 percent of the global economy — and more countries are interested in joining, too.

The vote won't technically approve the partnership. But if it passes, and it's expected to, it will mean the Senate can't filibuster or amend whatever version of the TPP Obama negotiates. It's as close to a rubber stamp as you can get on the hill these days.

Does that excite you? Terrify you?

Supporters of the TPP say it will be an economic boon for everyone. Critics say it will hurt workers and the poor while enriching multinational corporations.

It’s hard to say because the details of the partnership are secret, as GlobalPost Senior Correspondent Patrick Winn explained last year. But what we do know about the proposed free-trade zone suggests it could mean tighter regulations on the internet, an end to rules that promote buying domestically made products, and more expensive medicine.

GlobalPost Senior Correspondents Ioan Grillo and Simeon Tegel, based respectively in Mexico and Peru, this week took a closer look at how the TPP could affect healthcare around the world — especially in Latin America, where poor patients rely on access to affordable generic drugs.

Pharmaceutical companies lobbied hard to make sure they benefit from the TPP. One thing they’d like to come out of the trade deal is a longer patent period for name-brand drugs. They argue that you get the best new technologies when there’s the possibility of huge profits for the companies making them.

But they don’t explain what the struggling people GlobalPost met in a bargain basement pharmacy in downtown Mexico City will do if cheap and life-saving generic drugs disappear, and high-cost patented ones fill the shelves in their place.

Speaking of partnerships, Russian President Vladimir Putin and South African President Jacob Zuma are spending an awful lot of time together these days.

Zuma just got home from his fourth official visit to Moscow in 10 months, and South African media has started calling their relationship a "bromance."

So what's it all about?

The TPP should give you a clue. While the US is building trade relationships and establishing spheres of influence, Russia is doing the same.

As GlobalPost Senior Correspondent Erin Conway-Smith writes, "Zuma and Putin often meet on the sidelines of events for the BRICS group of emerging economies, which also includes Brazil, India and China, and has become a strong geopolitical bloc with an unofficial policy of counterbalancing Western power."

None of those countries has criticized Russia's annexation of Crimea. And they don't support the Western sanctions imposed as punishment.

For South Africa, a relationship with Russia is about more than just economic growth.

While he was in Moscow during this most recent visit, Zuma had this to say about the West:

"Their intention has never been to make the former colonial countries develop. They still regard us as the Third World, as a kind of people, who must be related to as the former subject."

Sometimes animals wander into places where you don’t expect them, and the internet gets really excited.

Like when a sea lion pup nicknamed “Rubbish” was spotted walking around San Francisco at the end of April. Or last week in Australia, when a koala meandered through a hospital emergency department and security footage of his stroll went viral.

Now there’s a new member of the club: the wild boar who strayed into a Hong Kong shopping mall Sunday and went on a rampage through a children’s clothing store.

With no regard for Mother’s Day shoppers or for a line of police who stood helpless in the face of her wrath, the boar crashed through a ceiling, wrecked window displays, and made a general mess of things.

The whole thing went on for four hours, which means there’s got to be some amazing footage out there. For now, this 30-second video will have to do.

“Good news,” GlobalPost’s Timothy McGrath writes. “She wasn't shot and killed, as you might be worrying.”