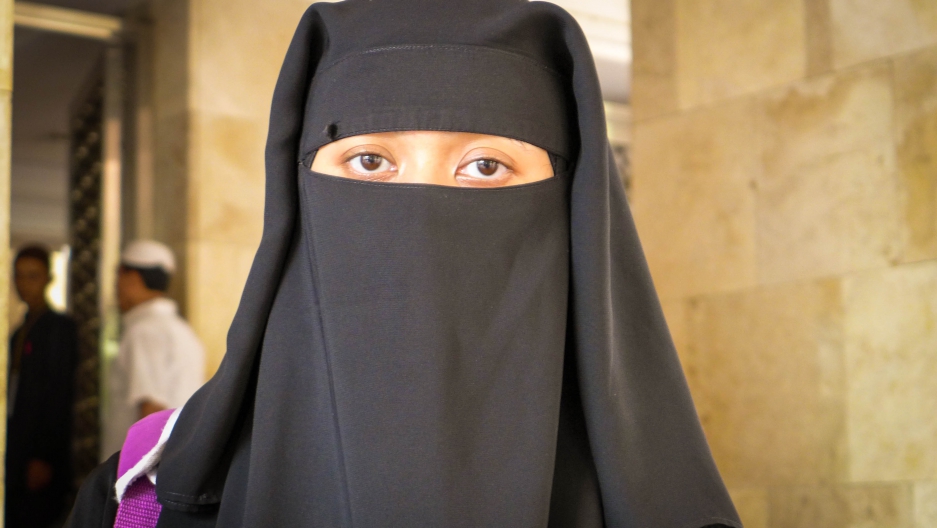 Juanita Vyatri, 29, works as a mobile application designer in Jakarta, Indonesia. She dropped out of college during the third semester to start a business in web and mobile application development with her husband. Vyatri is a practicing Sunni Muslim. She started to wear a niqab, the cloth that covers everything but the eyes, at the age of 19. “In the beginning, I felt people staring at me. Now I’m used to it, it’s not a problem."
Credit: Riikka Haikarainen
Share

JAKARTA, Indonesia — Every morning, Juanita Vyatri wakes up at 4:30 a.m. in her home in Cibubur, a suburb of Jakarta. She washes herself and kneels down for the Islamic morning prayer in her bedroom.

Her 30-minute calm breaks as her five kids — ranging in age from 18 months to 9 years old — roll out of their beds, take baths and eat breakfast prepared by the two housemaids.

After the two eldest children have left for school, Vyatri, 29, sits down at her MacBook Air and starts working on her newest project: a mobile application for the holy month of Ramadan. The app, which she is developing for both iOS and Android platforms, will include wake-up calls for the pre-dawn meal, prayer reminders and mosque locations.

“I’m not good at sewing, selling or even teaching. So I choose to code instead,” says Vyatri, a conservative Sunni Muslim who wears the niqab — the face veil covering all but the eyes — when she is in public.

She carries her laptop around and codes while watching the kids play or breastfeeding her youngest. Vyatri also taught the female college student who designed an app called Prayer Chart, aimed at children. The Android tablet app features red, yellow and green icons for each of five daily prayers. Having finished one, the kid taps another icon and the app produces an animated children’s choir cheering “Alhamdulillah,” Arabic for “praise God.”

Vyatri applies her programming knowledge as a member of a family business. Her husband Brian Arfi runs Firzil, a mobile application company that has already launched 11 Islam-related applications. Firzil serves as an example of how mobile internet is creating new ways of practicing Islam in Indonesia, the most populous Muslim country in the world. According to Ibrahim Warde, professor of international business at Tufts University, the Islamic financial sector in Indonesia has experienced a “noticeable spike” in the last decade, including Sharia-compliant investment funds.

Indonesia boasts a robust mobile market: In a country of 250 million people, over 310 million mobile phones are ringing in pockets and purses, according to United Nations statistics from 2013.

In Jakarta, a metropolis infamous for its traffic jams, even motorcyclists scroll through their Twitter and Facebook feeds while waiting for traffic lights to turn green.

The rise of Islam-related mobile applications reflects not only the growing digital market but also the increase of the religious economy in Indonesia.

Firzil’s founders say Islamic apps are a tool to encourage loyalty and obedience to Islam. Vyatri and Arfi’s daily devotion through technology creates a paradox.

“We’re not supposed to innovate in Islam,” Arfi says. “But that’s only in a sense of worshipping, not in a sense of day-to-day life. I’m a very rational guy.”

After Vyatri and Arfi got married and dropped out of college together in 2006, they first started experimenting with e-commerce, setting up an online store selling Islamic books and garments like hijabs, veils that cover head and neck. Digital business was a natural choice for both; Vyatri had started learning how to program already in high school.

“My brother was an e-commerce major and he had lots of books and software from Adobe. I loved playing with them just for fun,” she says.

However, the first months were rough for the couple’s start-up.

“Not that many people were yet online [in Indonesia],” Brian Arfi says. “But after six months, people started asking us to make websites for them.”

“We develop religious apps because when we teach other people how to worship better, do good and gain Allah’s pleasure, we also get the same blessing as the one that does the good thing,” Arfi says.

Another prominent Indonesian developer for Islamic apps, Didats Triadi, confirms Arfi’s logic. Triadi knew that he wouldn’t get much money from his Quran-reading tutoring app, so he made it available for free, saying, “It's better to get God's attention by making the app free of charge without any ads.”

As conservative Muslims, Arfi and Vyatri try to practice Islam as obediently as possible. Vyatri decided to wear niqab, when she was 19. At that time, she moved back to Indonesia from Qatar, where her father had been working for the Qatar Petroleum, and immersed herself in Islamic teachings.

“According to the authentic scholars of Islam, there are two opinions about covering the face of women. Some say it’s compulsory, others say it’s preferable. After comparing these two different opinions, I believe preferable is the strongest opinion,” Vyatri says.

“At first when I started to wear niqab, I felt people staring at me. After ten years, there’s no problem anymore. Since I don’t find any danger or threat if I cover my face here in Indonesia, then why not just wear it? It’s preferable anyway.”

According to Vyatri, her parents are afraid she “will be influenced by terrorist movements” such as the Islamic State because she dresses in niqab. However, she describes her relationship with her parents as a good one — they talk via Skype almost every day.

“It’s just that every time there’s news about radical movements, my parents always call to make sure that I don’t join any of those groups. But after explaining what these groups believe in and how they're not practicing Islam according to the prophet Muhammad and his companions, my parents understand that I don’t belong to those groups.”

The market for Islam-related mobile applications targets Muslims from all backgrounds — also the newly-converted ones learning how to practice the religion. As the call for prayer echoes from minarets, an app called Pray Moeslim comes in handy: it demonstrates the correct praying procedure.

The user swipes through drawings of a young male in various praying positions. In one illustration, the boy’s hands are held up, his fingers pointing to the heavens. The text below reads: “Raise your hands up to your ears, and say in a moderate tone: ‘Allahu Akbar, Allah is the greatest.’ Do this while standing.”

The Pray Moeslim application was designed in 2014 by Valdi Adrian Abrar, a student at the State Islamic University in Yogyakarta. Abrar took a class on mobile application design that offered an attractive incentive: the students who designed five apps during the course would win a smartphone. With Pray Moeslim and four other applications, Abrar hit the jackpot and a BlackBerry was his.

In addition to tutoring Muslims in religious practices like mastering the prayer schedule, the technology is fueling a more fundamental culture change, experts say. Faced with the ubiquity of mobile devices and social media, imams are adjusting their style of preaching, says Dr. Martin Slama, an Austrian anthropologist who works at the Institute for Social Anthropology at the Austrian Academy of Sciences.

In embarking on a three-year research project about Islam and social media in Indonesia, Slama has discovered that preaching has become a two-way street bolstered by digital tools.

“The preachers have told me that their followers on Facebook and Twitter are challenging them,” Slama says. “People ask them, 'what is the basis of your opinion, how did you come to this conclusion, why are you recommending this and that?'”

Dr. Fatimah Husein, who is partnering with Slama on the project called Islamic (Inter)Faces of the Internet by conducting interviews in Indonesia, confirms the changing ways of communication between lay people and religious authorities.

“Normally [face-to-face], you don’t talk to religious leaders that much. Now you can,” says Husein. “You can tell them even about small things — like if you have disputes with your husband — and ask for advice. This has really changed the way we understand and practice Islam.“

For the preachers, it’s increasingly important to quickly respond to such questions from their followers. With the help of digital devices, the religious leaders can potentially connect with millions of Muslims.

Husein and Slama are eager to learn about the process of individualization. Does the strengthening dialogue between religious authorities and their followers promote independent thinking that might conflict with tradition?

“The digital tools can bring people closer but to some extent it makes people become more individualistic,” Husein says. “Whether they feel they have more authority over their religion — that I don’t know yet.“

Firzil’s Juanita Vyatri and Brian Arfi envision their future as prominent, successful Muslim entrepreneurs. The couple has a rough 5- to 10-year plan: to move from Jakarta to the holy city of Medina, Saudi Arabia, and try their luck in the local digital start-up scene, Arfi says.

“After reaching a certain level of business independence, when our business can run by itself, we plan just to retire and learn Islam more deeply," he says. "That’s the dream.”