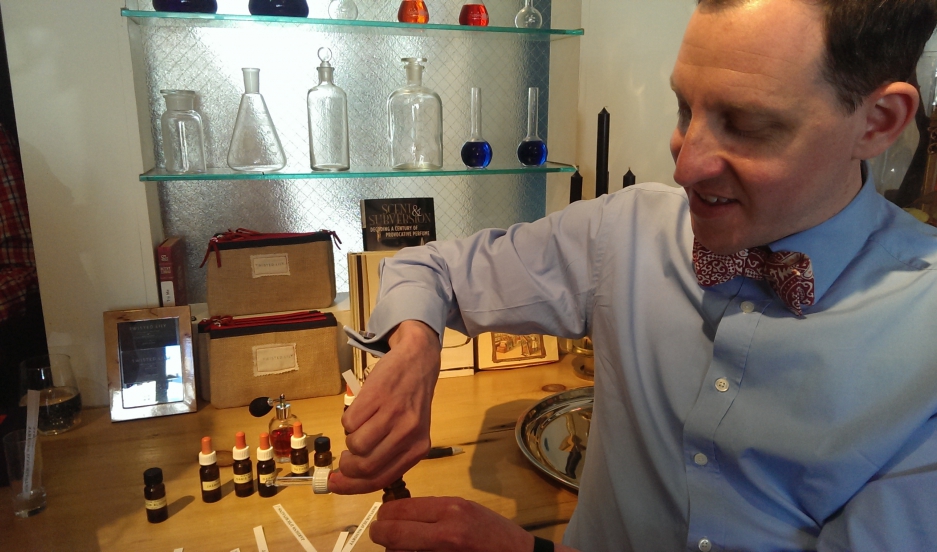 Hiram Green shows off some of the raw essences that go into his perfumes. He's at Twisted Lily, a fragrance boutique in Brooklyn.

​At Twisted Lily, a fragrance boutique in Brooklyn, I learn that things quickly get personal when you’re talking about perfume — like when co-owner Eric Weiser explains why I won’t like one of his favorite perfumes.

“It has one word [in] the name, and it’s stercus," he says. Stercus, in case your Latin is rusty, means “feces.”

But I take a whiff — and it smells nice. Not fecal at all.

Stercus is just one of the words perfume fanatics use to describe something that smells really great. “Skunky, dirty, fecal, urine-y, barnyard-y,” Weiser says. "It can be a compliment to a perfumer.”

Asking personal questions of a perfumer is actually what brings me to Twisted Lily today. They’re unveiling a new scent by Hiram Green, a perfumer based in the Netherlands. Most of the perfumes sold here don’t come from Chanel or Christian Dior. They're handmade by individual perfumers, most of whom are self-taught — which I find striking.

At LA's Institute for Art and Olfaction, the science and history of perfume takes center stage

You’re awash in options if you want to study piano or cooking or painting, but there are barely any perfumery programs. Scent remains the most enigmatic, least explored of senses. So I wondered: How does one go about joining this mysterious self-initiating cult?

“It hasn’t been an easy or a quick quest,” Green says. He spent 10 years experimenting with natural oils before finally launching his perfume line.

Before that, Green ran his own perfume shop. People kept coming in asking for “all natural perfume” free of synthetics, but there just wasn’t much out there.

“I guess it’s a bit of authenticity, if you like,” Green says. “Chanel No. 5 [and] a lot of the perfumes that you buy in department stores, though they may smell like flowers, they don’t necessarily contain the essences of the natural flowers.”

Green's own perfumes took years of trial and error to develop, in part because natural extractions are a lot more volatile. But there's also no perfume textbook, no ideal scent, he explains. It’s just you chasing down your own olfactory dream, and that can get pretty abstract.

But that hasn't stopped micro-perfumeries from becoming a major force in the fragrance market. Last year, Alia Raza and Ezra Woods launched their new perfume company, Regime des Fleurs, in Los Angeles. A year ago, they were at Paris Fashion Week, practically broke, gathering orders for hand-made scents they’d bottled themselves. Today their perfumes are on the cover of Bergdorf Goodman’s spring beauty catalog.

One of their signature scents is “nitesurf.”

“Think of like an orange blossom, but on steroids," Raza says. "Very, very, extra-special bright, almost industrial cleaner. Highlighter markers, orange Tic-Tacs — but with a feeling of orange blossom as well."

I can’t say nitesurf conjured the same hyper-specific references for me, but when I sample “Floralia,” a fragrance meant to evoke a white marble statue, I swear it smells like white marble.

I realize perfumers are actually painting with scent. And as with painters and punk rockers, being self-taught can be a mark of pride. “By its very nature, what we do is going to be experimental and different and weird and out of the box,” Raza says.

Raza’s partner, Ezra Woods, explains that critics complain that it doesn’t have “structure.” “I don’t even fully know what that means, but I know that this doesn’t because it was made to smell good,” he says.

“We wanted to make the smell of a forest underwater and so we did it," Raza says — and people who want to smell like underwater forests seem to agree. At $165 an ounce, water/wood is their best seller.

Green, Raza and Woods may have bootstrapped their education, but at least they can tap today’s booming market for niche perfume. That wasn’t the case when Andy Tauer launched Tauer Perfumes in Zürich, Switzerland, 10 years ago. When he put a bottle of his first perfume for sale at a local bookstore, his friends wondered what he was doing.

“[They said] 'There’s enough perfume out there and nobody knows you and what do you think is going to happen? Do you think somebody is going to buy that?'” he remembers. Today, Tauer perfumes are sold in 15 countries, and many consider him to be the Godfather of niche perfumers.

So what’s his advice to those starting out? Never ask for advice.

“The very moment you ask somebody for help, you have already lost the game," he says. "You really have to try to be as independent as you can be as a creator. It comes with a price to pay but you do not learn by doing everything right. You learn by the mistakes, by things falling apart in your bottle, in your formula.”

Got that, wannabe perfumers? Fail harder — and be brave.