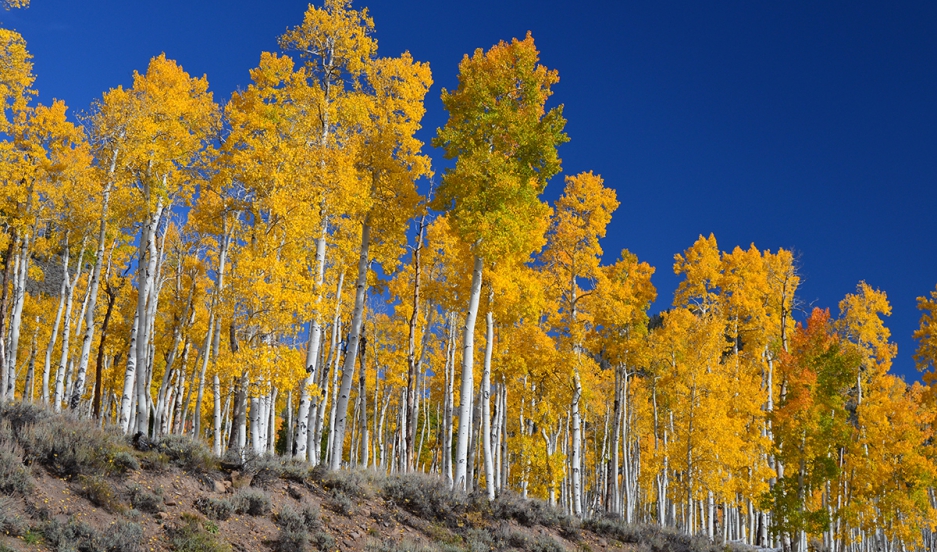 A photo of Pando in the fall at Fish Lake National Forest.

The largest organism on Earth probably isn't a whale or a giant octopus or anything else you might naturally think of first. It's a tree — or a group of genetically identical trees that stretches across more than 100 acres of Utah's Fishlake National Forest.

Called "Pando," which is Latin for “I spread," the group of quaking aspens is considered one of the largest — by area — and most massive living organisms on earth. The quaking aspen, found from coast to coast across North America, grows in groups called stands. Within these stands, a single tree will spread by sprouting new stems from its roots, often several feet from the original trunk.

“Those trees remain connected for a good long while,” explains Jennifer DeWoody, a geneticist with the US Forest Service. “This long process is over many years — suckers [or stems] coming up over a larger and larger area.” Their stems can share the products of photosynthesis, food, and possibly disease as well.

Because individual aspen stems generally live about 100-150 years, DeWoody says the origin mother stem is likely dead: “The only way the whole clone survives is to send up new suckers,” she says. While other trees can also clone in this way, “[aspens] do it the most broadly across so many different environments.”

Pando is unique because its stand is so massive compared to most others. University of Colorado scientists estimated in 1976 that it contained around 47,000 stems. Those scientists were also the first to describe Pando as a clone, based off of morphologic and aerial photographic analysis. But it wasn’t until 2008 that DeWoody and researchers from Utah State University confirming that Pando indeed was a single genetic individual, by collecting leaf and bark samples from the trees and analyzing their DNA.

Estimates say Pando’s genetic makeup could be anywhere from 80,000 to one million years old — “that’s a very hard thing to measure,” DeWoody says. But based on analyses of how long it takes aspens to grow and to sprout, scientists agree Pando is extremely old, if not one of earth’s most ancient organisms.

Yet aspens haven’t been growing very much in the West in recent years. “These little aspen sucklings are really tasty to things like elk and deer,” DeWoody says, and in the case of Pando, “for a long time, there were no new stems coming up because they were being grazed really heavily.” Foresters have been putting up fences to keep the animals out, and have also been cutting some trees to stimulate new growth.

The best time to see Pando, DeWoody says, is when summer shifts into fall. “Aspens are really great because they’re one of the first things to turn color.” The quaking aspens — also known as trembling aspens because their leaves catch the breeze in such a way that makes the trees look like they’re shaking — turn a brilliant gold in the fall. In the West especially, it’s one of the only trees that changes color like that.

“It’s a great example of some of the wonders that are out on your national lands, your public lands,” DeWoody says. “So go visit your national forests!”