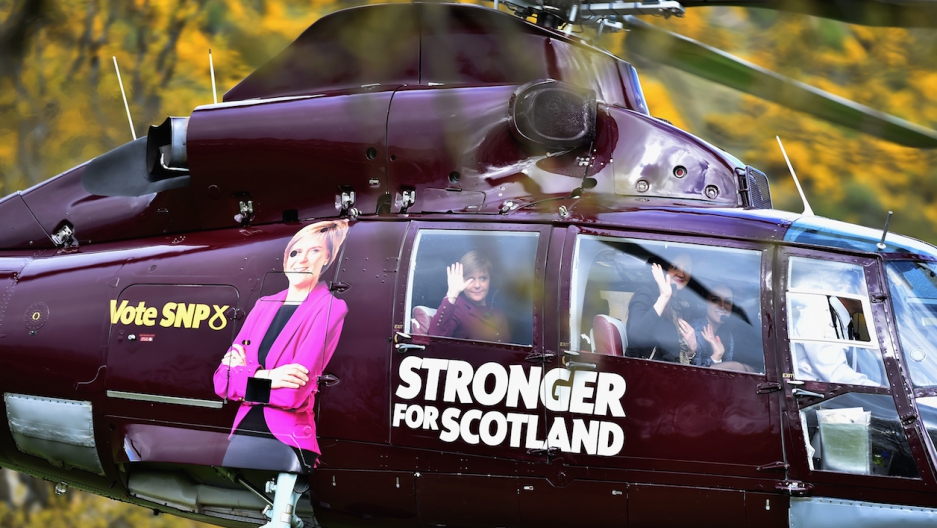 Update: The Scottish National Party won an unprecedented 56 of Scotland’s 59 seats in the UK Parliament in Thursday’s election. The following story was published before the vote on May 4.

GLASGOW, Scotland — Last September, Scotland voted "no" in a referendum on leaving the United Kingdom. You would expect pro-independence forces to be at a low ebb after a crushing defeat like that. You would be wrong.

For one, they now have their first woman leader: Nicola Sturgeon, a 44-year-old lawyer with a fondness for historical fiction and selfies with her growing legion of admirers.

Her Scottish National Party (SNP) is expected to win a sweeping victory in the UK’s May 7 general election — potentially making Scottish secessionists kingmakers in the country they have spent decades trying to break up.

The party has grown so quickly that some analysts predict one of Britain’s two main parties could have to partner with the SNP to form a new government and ultimately pick the UK's next prime minister.

That is extraordinary, and unprecedented.

In the last general election, in 2010, the nationalists won just six of 650 seats in the UK Parliament in London. A poll this week suggested they’ll win all 59 Scottish constituencies this time.

So, why is the SNP soaring? The short answer: People have become engaged with politics again.

Election turnout in Scotland used to be among the lowest in the UK. On Thursday, Scots are expected to vote in greater numbers than their English, Welsh or Northern Irish counterparts.

The reason for this renewed appetite for politics — and Scottish nationalism — is last year’s referendum. Scottish independence was long a minority concern. For decades support for leaving the UK was stuck at a third of Scots.

But in the weeks and months leading up to September’s vote, the idea of creating a new state caught the imagination of people across Scotland. Politics began to be talked about in pubs, cafes, on television and radio, over dinner tables and water coolers.

In the end just under 45 percent of Scots voted for independence. The biggest single factor in the "no" vote was economic concerns. But many Scots felt that London’s pledges of more powers for their legislature in Edinburgh were not kept. Momentum swung back to Scottish nationalists.

Have you heard of more than 75,000 people joining a political party in a country of 5 million in just six months? That is what happened in Scotland. The SNP, with membership over 100,000, is now Britain's third largest party.

The Labour Party has won the most seats in Scotland in every UK election since 1955. Now it’s facing an electoral wipeout in Scotland. That would make it almost impossible for any party to form a majority in the House of Commons.

More from GlobalPost: The two-party system in the UK is gone

But beyond parties’ post-election deal-making to reach the 326 seats needed to form a new government, something far more significant could be happening. The SNP’s success has raised the prospect of a second referendum. Another vote on independence is unlikely in the short term, but if Scottish nationalists get their way the union between Scotland and England might not last much longer.

Peter Geoghegan is author of the new book “The People's Referendum: Why Scotland Will Never Be The Same Again.”