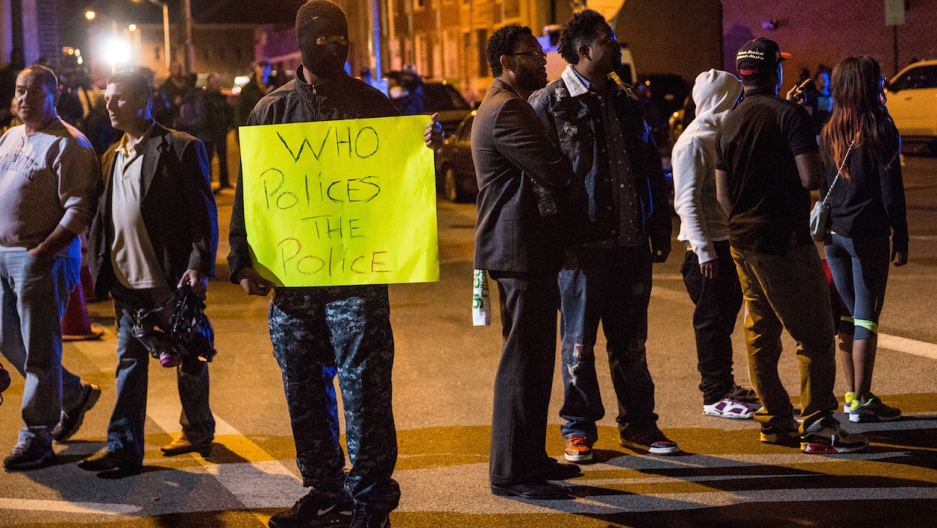 It's official: 25-year-old Freddie Gray's death was a homicide, according to Baltimore State Attorney Marilyn Mosby. Criminal charges will now be brought against the six police officers involved in Gray's arrest.

Gray was arrested on April 12 and lost consciousness in the back of a police van. When he got to the hospital, he was in a coma, his spinal cord was severed at the neck, and his voice box was crushed. He died a week later. Video of the arrest showed police putting Gray into the van. He was conscious and handcuffed. He also seemed to be in pain. Police didn't immediately explain how Gray suffered the spinal cord injury that killed him.

More from GlobalPost: North Korea, Venezuela and Russia are having a field day with Baltimore

A furious Baltimore community had had enough. They came together to demand justice for Freddie Gray and to continue the now months-long national protests against police killings of people of color, including Michael Brown, Eric Garner, and Walter Scott. They protested. Some rioted.

US police brutality against civilians is in the spotlight once more, and the world is watching.

There's so much we don't know about why and how often people die during police encounters, and yet, we know enough to know that American police are killing far, far too many people compared to police in other developed countries.

While no US government agency is keeping reliable records of how many people die each year during encounters with police, the best estimates suggest the number is no lower than 400 per year, and most likely around 1,000. Police in peer nations like Germany, Denmark, the UK and other liberal democracies — meanwhile — rarely kill civilians. Even accounting for population size, the frequency with which American police kill civilians is shocking. Not twice as often, or three times as often. We're talking factors of 20 to 70.

If the deaths of Michael Brown, Eric Garner, and Freddie Gray prompted you at any point to Google something like, “How many people do American police kill every year,” then you probably know that we don’t know.

You’d think state and federal officials would keep better track of something as serious as a law enforcement agent killing a civilian. You’d think agencies like the Department of Justice would publish annual reports, chart trends over time, map where police are killing civilians with higher frequency, and identify who’s dying and under what circumstances. This kind of information would be essential for training the nation's police more effectively, reforming departments that kill people in disproportionate numbers, and reassuring an increasingly suspicious and even hostile public that police are being held accountable. Well they don't keep those records, and in failing to keep them, they produce the exact opposite effects.

Trying to get facts about police killings means venturing into an internet wormhole. So let’s start with what data the government does provide.

The FBI provides information about what it calls “justifiable” homicides committed by police officers. Their data runs from 2009 to 2013. According to the data, police commit a little over 400 justifiable homicides per year. In 2013, they killed 461 people. So you’ll see the 400 number a lot when you try to figure out how many people police are killing.

But there are reasons to be skeptical of that number. Most obviously, it doesn’t include information on police homicides that were found to be unjustifiable. So the unjustifiable police shooting of Walter Scott on April 4 in South Carolina wouldn’t count. There are also questions about transparency, record keeping, and self-reporting by local police departments.

It’s not clear whether the FBI is tracking deaths that result from police use of physical force during arrest, restraint, and processing at jail. That means the numbers likely wouldn’t include Freddie Gray’s or Eric Garner’s deaths.

You can get a different set of answers from the Department of Justice’s Bureau of Justice Statistics (BJS) data on “arrest-related” deaths. Unfortunately, it’s a set of answers BJS admits is so unreliable that it stopped collecting the data in March 2014.

Again, there are problems with these numbers.

First of all, after a self-audit, BJS decided that its collection method, which, like the FBI data, relied on self-reporting by local police departments, wasn’t producing reliable enough data.

Second, it’s not fully clear when you stop calling a person’s death “arrested-related” and start calling it a death “in custody.” BJS keeps those records, too. And once again, the data makes it impossible to know how many people police are killing every year.

BJS doesn’t explain, for example, whether it’s a custodial death or arrest-related death if a police officer asphyxiates a person while restraining them in short-term lock-up. And it doesn’t distinguish between homicides committed by police or correctional staff and homicides committed by fellow inmates. It lists just a single number for “homicides” in all state prisons and local jails.

We need to know these things. That we don’t is sketchy enough for BJS to have a FAQ about it on the website:

Are homicide counts limited to homicides committed by other inmates or facility staff?

No. The total homicide count includes all types of intentional homicide and involuntary manslaughter as ruled by a medical examiner or other official medical investigation. The total includes homicides committed by inmates. It also includes homicides as a result of staff use of force, such as positional asphyxia, or suffocation caused by the position of the inmate's body, while the inmate is being removed from a cell. It includes legal-intervention homicides (e.g., an inmate is shot in the process of escape).

For now, the closest we can get to a real answer about police killings comes from watchdogs and data junkies. Mapping Police Violence, an independent monitoring group, mined news reports and found that police killed at least 1,149 people in 2014. Nate Silver’s Five Thirty Eight also estimates that police killings could be somewhere around 1,000 per year.

What about other countries?

To make sense of these numbers, you need to know just how rarely police in other wealthy liberal democracies kill civilians.

Compare the police record from 2010-2014 to Baltimore’s police record, which we know thanks to an investigation by the ACLU. In Baltimore alone, 31 people died in police custody, exactly half the number who died in all of England and Wales.

England and Wales have a combined population of 56 million. Baltimore’s population is 622,000. Do the math and you realize that people in Baltimore were about 50 times more likely to be killed by police. And the disparity is even larger when you factor in shooting deaths. The Economist estimates that British citizens are 100 times less likely to be shot by police than Americans.

The story is the much the same in Germany, a country of 80 million people, where about 100 people have been killed by police since 1998.

In Iceland, police have only killed one person since the republic was founded in 1944. Granted, the population of Iceland is just 323,000. But it’s still impressive.

And here are some other comparisons published in a study by the Danish police on firearm use between 1996 and 2006.

Here’s what they found:

If we take Five Thirty Eight’s estimate that 1,000 people are killed by police in the United States every year and divide it by the 2000 population of 282 million, the American situation for just one year would look like this:

Are you comfortable with that?

Defenders of American police will often explain the disparity on the prevalence of guns in the United States. More people with guns and more gun crime means American police might be quicker to use deadly force. But if you compare per capita gun to per capita police homicides, that theory doesn't hold up. We clearly need to figure out why this is happening and what will stop it.

A start would be keeping records that it's happening at all.

Correction: Some of the numbers used to describe the Danish police study in an earlier version of this story were incorrect. The figures have been updated.