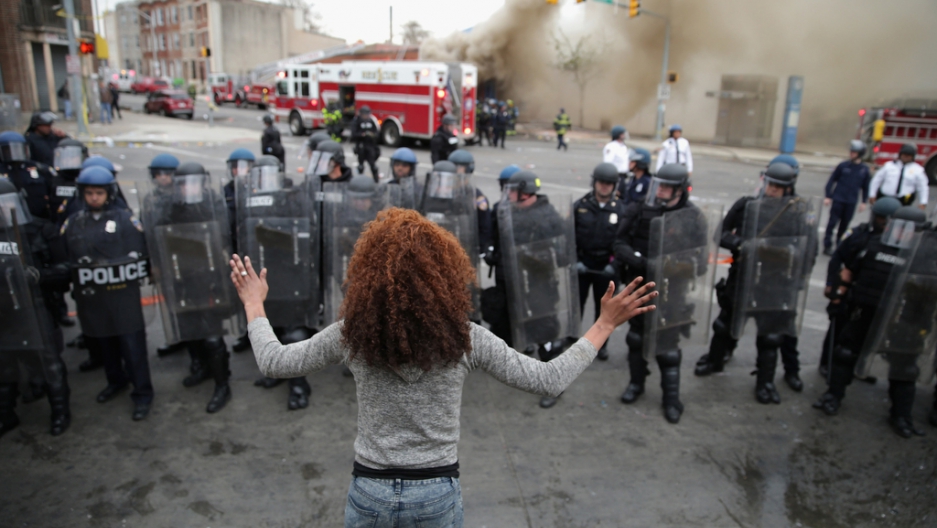 A woman stands in front of riot police in Baltimore on April 27, 2015.
Credit: Chip Somodevilla
Share

People around the world are watching Baltimore, just as they watched Ferguson in August, and the headlines in some countries are more damning than in others.

Protests and riots have come in response to the death of Freddie Gray, a 25-year-old black man who died from a spinal cord injury after police arrested him on April 12.

The community of Baltimore is furious. Many are protesting. A few people are destroying property and looting. Police are wearing riot gear. CNN reporters are walking around with camera crews. Officials said Friday that the state was bringing charges against six police officers for their role in Gray's arrest.

And so Freddie Gray joins Michael Brown and Eric Garner as the men whose deaths will define the present moment in America's long, dark history of state violence against people of color.

"The latest murder of the black man by a white policeman goes to clearly prove that the US is the worst tundra of human rights in the world."

It's a very bad look for the US, which has a habit of criticizing the human rights records of hostile nations while avoiding the human rights implications of things like drone strikes, military occupation, surveillance, mass incarceration, the death penalty, and systemic racial inequality.

So it shouldn't come as any surprise that some nations accustomed to being on the receiving end of US reprimands are returning the favor — and then some — over what's happening in Baltimore.

In a blistering commentary republished by the Korean Central News Agency, the Rodong Sinmun newspaper — official mouthpiece of North Korea’s ruling Workers' Party — accused the United States of being the “worst human rights abuser” on the planet.

“The latest murder of the black man by a white policeman goes to clearly prove that the US is the worst tundra of human rights in the world,” the newspaper said, echoing things the regime has said in the past.

“The US is apt to pull up other countries over their ‘human rights’ issues and dictate them to do this or that whenever it opens its mouth. This clearly proves once again that the US is not a human rights champion but the worst human rights abuser and the cruelest human butcher.”

Moscow-controlled Russia Today published a recording of an interview with Mark Mason, who describes himself as a US domestic and foreign policy analyst “for the international news media.”

In the more than 11-minute-long interview, Mason criticizes Baltimore authorities for their heavy-handed response to the rioters and claims the United States is a “police state” where “racist death squads” attack and kill black people.

You can listen to the full interview here.

Russian state television, meanwhile, called the protests and riots a “colored revolution” and “Afromaidan,” in reference first to the popular uprisings in several former Soviet republics and, second, to the deadly protests in Kyiv’s Maidan, or Independence Square, in 2014.

Russian state TV gets "colored revolution" and "Afromaidan" into the same headline re: Baltimore. http://t.co/TVAZZTg7ok

Venezuela’s state-run Agencia Venezolana de Noticias (AVN) published a story under the headline “Racism: The systemic form of discrimination in the United States," which accused President Barack Obama of “double standards” in his response to the Baltimore riots after he condemned the violence.

Rewind to the first half of 2014 when Venezuela was "overwhelmed" by anti-government protests and AVN claims Obama tried to portray the organizers as “victims,” which the news agency said was a misrepresentation of the facts.