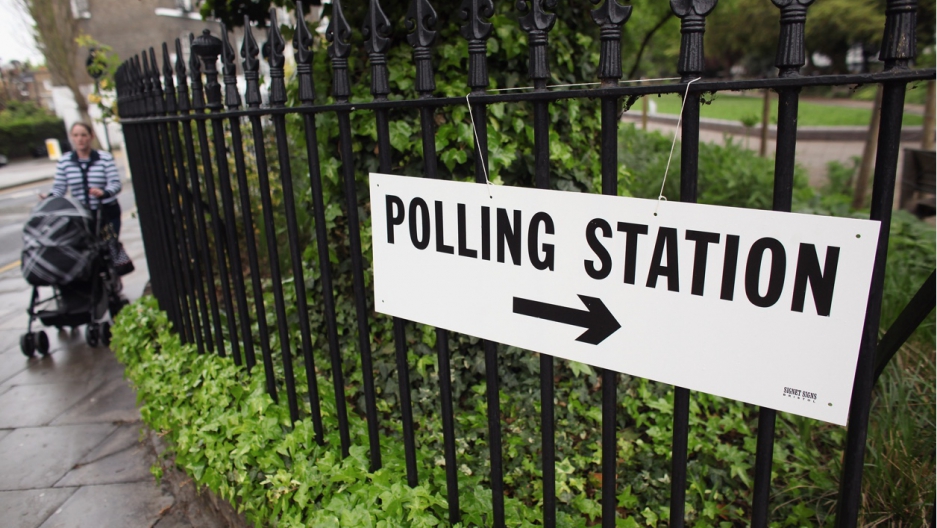 The days of a two-party system in the United Kingdom are now gone. And as a result this is one of the most hotly-contested elections in years.
Share

NORWICH, England — The debate is in full swing in the bar of the Playhouse theater.

Candidates hoping to represent the city of Norwich in the British parliament after the May 7 general election are fielding questions from a packed house of beer-swilling voters.

Among the wannabe lawmakers is Steve Emmens from the United Kingdom Independence Party, or UKIP.

Into martial arts and military history, he promises to take on “faceless bureaucrats” from the European Union and adapt the education system to “people like myself, very, very good with their hands, but never academic.”

Green party candidate Lesley Grahame comes across like your kindly but eccentric aunt, with a unruly mop of blond hair and a penchant for thrift store clothes. Standing against hunger, climate change, war, “oh, and nuclear weapons,” she is one of her party’s biggest hopes for shaking up British politics.

New mom Jess Asato is among the bright young hopes of the Labour Party, which, under leader Ed Miliband, is seeking to be voted back into power across the country.

Conservative and Liberal Democratic candidates were invited, but were apparently otherwise occupied.

In the audience, voters are wavering.

“If I don’t vote Labour, it will be the first time ever,” says 82-year-old widow Jean Devenport. “I’m really thinking of going with the Greens, they have good ideas. I’m really not sure.”

Politics in Britain used to be simple. Like in the United States, there were really just two parties to choose from. Governments alternated between Conservative and Labour. Malcontents voted for the middle-of-the-road Liberal Democrats, regional interest parties in Scotland, Wales and Northern Ireland, or marginalized oddballs like the Official Monster Raving Loony Party.

But things are different now, making this the most unpredictable and diverse British election in generations.

The Conservatives of Prime Minister David Cameron and Miliband’s Labour candidates are polling neck and neck, but neither looks like they will win an outright majority.

Their dominance is partly threatened by the emergence of the far-right UKIP and the Greens as serious vote-getters, and by the strength of the Scottish National Party — which has bounced back from defeat after last year’s independence referendum and is expected to win a near sweep of the 59 seats north of the border.

Meanwhile the Liberal Democrats have seen their popularity plummet since they took on the two-party system in the 2010 election to secure a junior-partner role in the Conservative-led government. Still, they could win enough seats to play kingmaker again in a hung parliament after May 7.

Political pundits are struggling to work out the permutations.

Could Cameron stay in power with another coalition with the Lib Dems, or maybe with the help of Northern Ireland’s Democratic Unionist Party? Will the Lib Dems switch allegiance to Labour? Or will Miliband run a minority administration dependent on the Scottish Nationalists?

It’s unclear what all of this will mean for Britain’s ailing public finances, embattled health and education systems, strained relations with EU partners, or the country’s declining weight in world affairs as military spending looks set to fall below NATO targets for the first time ever.

But it sure means a lot of for the country's political makeup.

Although latest polls have dented the far-right UKIP’s ambitions — it’s not expected to win more than two or three seats nationwide — it is having an impact on Conservative policy. Cameron has promised to hold a referendum on withdrawing from the EU by 2017, if he’s re-elected.

UKIP leader Nigel Farage has succeeded in establishing himself as a major figure in British politics — with a well-honed persona as a straight talking, ale-quaffing, cricket-loving defender of English values. That helped make the upstart party a big winner in elections to the European Parliament last year — the first time Labour or the Conservatives had failed to top a national vote since the end of World War I.

Yet while many are prepared to vote for Farage in protest, they have doubts about his ability to hold high office.

“I voted UKIP in the past, but I don’t think he’d be suitable to actually takeover Downing Street,” says Barry Foster, a trader in Norwich’s colorful outdoor market. “He’s got a lot of good views — I’d like to get out of that EU — but I don’t think he’s good enough really.”

The challenge from UKIP has pulled the Conservatives to the right. Labour, threatened on their left flank by the Greens and the Scottish Nationalists, has also shifted away from the centrist position that the party has held since the leadership of Tony Blair in the 1990s.

That makes this election among the most polarized in years.

Although his party is deeply unpopular and derided as representing a privileged elite, Cameron is hoping a reputation for economic good sense will pull him through. “I know David Cameron is a bit posh … but he’s also quite clever,” says James Charter, a property surveyor. Although describing himself as “extremely right-wing,” Charter is not tempted to vote UKIP. “They’re loonies.”

Cameron will be hoping there are more voters coming to a similar conclusion. Miliband will hope waverers on the center-left will be put off by some of the Greens' more unconventional economic ideas — like a guaranteed "citizens’ income" or re-nationalizing the railways.

Latest polls show the Conservatives and Labour each picking up a third of the national vote, with UKIP hovering at around 13 percent, the Lib Dems around 8 percent and the Greens at 5 percent.

No matter what happens, the shape of the next British government could be very different next time around.