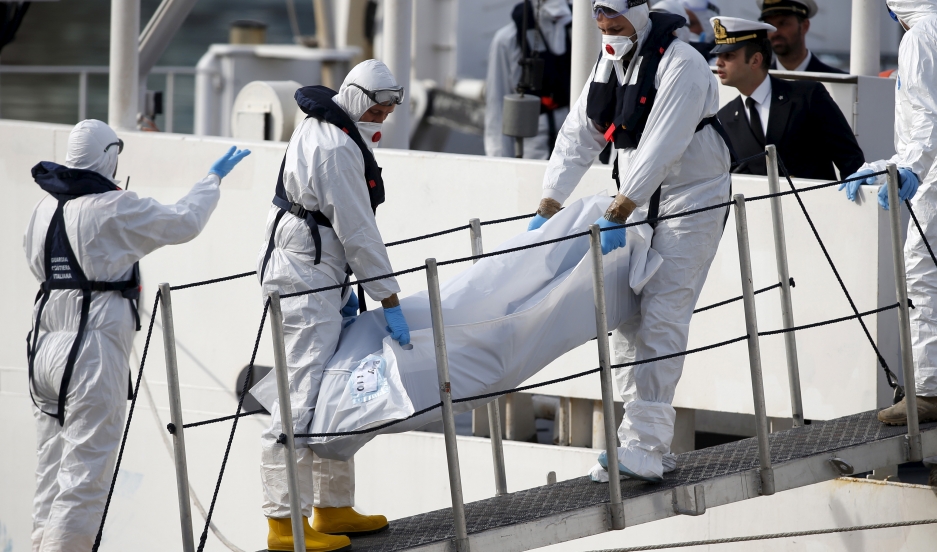 Italian coastguard personnel in protective clothing carry the body of a dead immigrant off their ship, Bruno Gregoretti, in the Grand Harbor of Valletta, Malta, on April 20, 2015.

In the past few weeks, hundreds of migrants have died trying to cross the Mediterranean Sea in search of freedom and a better life.

One Syrian migrant, Hasan, paid a smuggling network $7,000 to be taken to Europe from Sudan through Libya. He eventually made it to Milan and told his story to Vice News as part of their reporting series, "Europe or Die."

Though Hasan successfully made it to Europe, many others have not. Some 1,800 migrants and refugees have died making similar journeys this year alone.

“[Migrants] go through terrible things trying to reach Europe because there are no legal ways to get to Europe. You have to actually be on European soil to seek asylum,” says Miléne Larsson, a correspondent with Vice News. “That means that people like Hasan are forced to essentially throw themselves into the hands of people smugglers — criminals — to make this journey. There is absolutely nothing to guarantee their safety, particularly for people who take the route through Libya.”

Yet even as attention to the crisis on the Mediterranean grows, there is little information about what happens to migrants who don't make it to Europe.

“Most of the accidents and deaths happen off the coast of Libya,” Larsson says. “That means even if the EU boosts their own border security, which is the main priority of Europe, it won’t necessarily mean that more lives are saved. We’re going to see a summer of death.”

(You can watch a full episode of the Vice News series, titled "Migrant Prisons of Libya," below. Please be aware this video contains graphic footage.)

Migrants apprehended by the Libyan Coast Guard are brought to detention centers, where they face deplorable conditions and even torture while they remain locked up for long periods of time. In some instances, migrants are detained by militias in unofficial prisons outside of government control.

“You hear these stories on the news, but until you see the reality of it, until you meet the people that are going through it, you don’t get how inhumane, how urgent and how big this problem is,” Larsson says. “To me, it’s one of the biggest tragedies of modern history."

But even as Libya descends further into civil war, migrants from Africa and the Middle East continue to journey to the country's coast in search of smugglers to take them across the Mediterranean Sea and into Europe.

“They are fully aware of [the dangers,]" Larsson says. "I asked them why? Why would you do that when you know that you could die? The answer I’ve gotten in so many situations has been along the lines of, ‘Well, if I stay here I’m dead anyway.' Or, 'If I stay here, I die a little bit every day. If we go to Europe, we have a chance.’”

Larsson argues that the situation will continue to grow worse until the root causes of the problem are addressed.

"You need to tackle people smuggling networks," she says, "but as long as you still have these conflicts, people have to leave, and they are willing to risk their lives just for the chance to find safety — to find a place to live where they can build a life for themselves and for their families.”