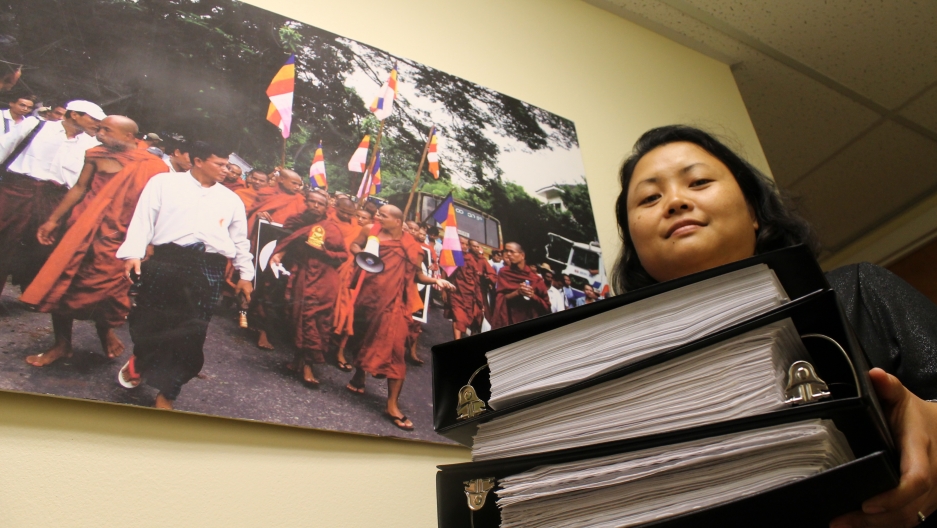 Myra Dahgaypaw preparing for delivery petitions that call on the Obama administration to take strong measures and show global leadership to end crimes against humanity in Burma.

It’s estimated that about five million Burmese have left the country and settled elsewhere in Southeast Asia and also in the United States. Among them is Myra Dahgaypaw, now the policy advisor at the US Campaign for Burma in Washington, DC. She was born as an internally displaced person and, as an adult, has worked to bring change to her home country.

Below is a Q&A with America Abroad's Madeleine Brand. It's been lightly edited for clarity and style.

Madeleine Brand: Tell us about what it was like growing up in Burma as a member of the Karen people, a persecuted minority in the southeastern part of the country.

Myra Dahgaypaw: I was born as an internally displaced person in Karen State, a very remote area where the Burmese troops and the Karen troops were fighting with each other very often. Basically, my villages were burned down many times. The reason why I say “my villages” is because once one village was burned down, we moved to another village, built it up, and established ourselves, but then, very soon after, that village was burned down too and we had to move to another place again.

There were times when I had to stay in caves in the jungle hiding from the Burmese troops. It was pretty scary. There was no safety, and I was always in fear.

MB: Did anything happen to your family?

MD: My parents were killed when I was very young, and my oldest brother, his wife, and his daughter [were killed in the mid-1990s]. I was raised by my uncle, my father's younger brother.

MB: Did you understand why you were being attacked or who was doing it?

MD: When I was a child I didn't understand a thing. All I understood was that we were the Karen people, and we fought for our freedom, and the Burmese troops didn't like it so they came in and they killed us.

With the mindset of a very young child, that's all I could understand. But, of course, as I grew up and started getting into the advocacy world, I reached the point where I can analyze the situation and why the Burmese government or the Burmese troops were trying to destroy us.

MB: You were able to get out of Burma. Now you're an advocate. How important is American influence in making Burma become more democratic?

MB: Did you think it was too soon when President Obama visited Burma?

MD: It was too soon. The gift was too big. When he started talking about re-engaging with the Burmese authority, at the same time we talked about action for action. We would like the engagement, but with tangible action, tangible outcomes.

He started off quite right, but then all of a sudden he was giving up all the leverage we'd had over a decade. Then he went there, and for the Burmese government, it's a big showing to the world that they are putting their act together, and that is why now they are recognized as a government that is moving towards democracy.

But deep down, there are tons of problems. You name it, we have it all in Burma. Those problems have never gone away. Most importantly, they promised President Obama that they would release all the political prisoners by the end of 2014, but that didn't happen. President Obama didn't look into that seriously. But this is something serious for us. If the government of Burma is saying it is really moving toward democratic reforms, it should be able to show us the result.

MB: Is there something specific that you would like the US to do in advance of the upcoming elections?

A lot of times, the international community will talk about monitoring, but then to what extent they have the access for monitoring is also a big question. For instance, the 2010 election was considered the most free and fair election in 20 years, but it wasn't really fair and free. Once people in the rural areas and small towns got to the voting booth, the name of the person was already crossed out for them. Is that what we call free and fair? Is that the location where the election monitoring team can have access to? No. The Burmese authorities, one thing we have to always keep in mind is that they don't allow you to go to everywhere you think you need to go, or you think you need to see, or you think you have to be. They only allow people to go to the place where they want them to go, they want them to see. This is very important.

If we really wanted to see a free and fair election, the genuine change, somebody will have to stand up and demand free access to the locations where the election monitoring people were not able to have access to before. Otherwise, you don't really see the real situation on the ground.

MB: What would you like the United States to do?

With that said, we cannot stop the engagement with the Burmese government. But at the same time, we can do it consciously, do it responsibly and do it with precondition. Basically we have to watch for actions. If the Burmese government is promising, do they deliver? If they don't deliver, then maybe it is time to be a little bit harsher. If we wanted to see the result, then we have to do what we need to do, instead of just giving it away freely.

MD: Sanctions are very important. A lot of people argue that sanctions don't work, but from my point of view, sanctions have been working, and that is why we reached the point where we are right now. Therefore, whatever sanctions we have left, we still have to maintain.

MB: Is there anything that's happening now that gives you some hope for the future?

MD: I don't really see anything that gives me hope, but I am still hopeful, because I do believe that change can happen. But it can only happen if we all work together, in our own arena, in our own scope, if we all work together in order to push this regime for the better. Therefore, justice and accountability are very important, because, otherwise, the perpetrators, the murderers, the rapists who are committing all these war crimes and crimes against humanities, which could even lead to genocide, will always get away from the crimes they are committing.

MB: Are there any Karen left in Burma?

MD: Yes, there are some. None of the ethnic minorities in Burma will disappear. One way or another, they will find a way to survive. I remember back in the early 1990s, one of the high-ranking Burmese army officers was saying that if you wanted to see Karen in the next 10 years, you'd see them only in a museum. What does that mean? It means that he's planning to terminate the whole ethnic group of the Karen people. But here we are, here I am, and one way or another, we're going to fight for our survival, and we're not going to disappear in this world.