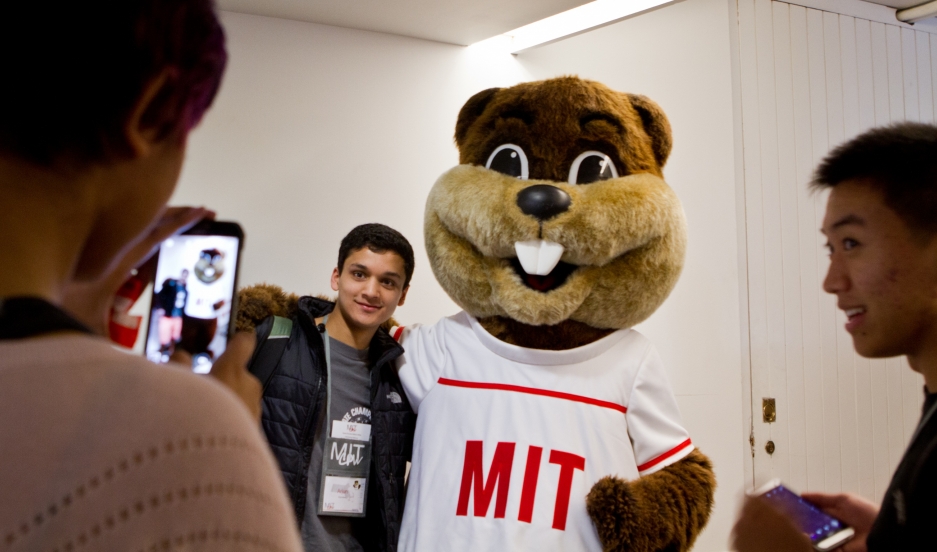 Admitted MIT students pose with the school's mascot during a weekend of activities at the university.

At a high school outside Boston, students walk past the Wall of Shame — a bulletin board plastered with college rejection letters, mostly from elite schools. Between classes, senior Sonya Nair reads notes that her classmates scribbled on a letter she recently got from Harvard.

"They don't deserve you."

The notes are a mixture of encouragement and angst.

"Columbia sucks," reads one message scrawled on a rejection letter from Columbia University.

It seems that college is all seniors at Newton South High School are talking about these days. That’s because tuition deposits are due May 1, and students like Nair are in the middle of admissions mania. “I actually got a Facebook message from one of the heads of the school newspaper asking me where I was going to go, to put it on a college map," Nair says.

Each year, the school newspaper publishes a map with little pins that show where each student has decided to attend college. It's things like this tradition that add to the pressure. Students like Nair are increasingly worried about making the right college choice.

The Wall of Shame at Newton South High School.

In his book, Where You Go Is Not Who You'll Be, New York Times columnist Frank Bruni says American families are more anxious than ever about getting into the most selective schools with the lowest acceptance rates.

"And they behave as if that's going to be the whole future. It's make-or-break, do-or-die," says Bruni during an interview on WGBH's "Greater Boston."

"We know that the kinds of metrics that impress a college admissions committee aren't necessarily the runestones for future success," Bruni says. "All of this is common sense, which we throw out the window when we get revved up by Ivy League admissions.”

So who's to blame for all the mania? Bruni says while parents are too invested in social status, colleges also exacerbate the problem.

"Colleges want you to apply, even if there's no chance you'll get in, because the more applications they get, the more people they reject, the lower their acceptance rate is," Bruni says. "We all buy into it by looking at a low acceptance rate and saying, 'That's a school I really want to go to. That's worth getting into.'"

Related: Where You Go To College May Not Matter

At Newton South High School, guidance counselor Aaron Lewis says convincing students that how they go to college is more important than where they go can be difficult, especially with the pressure to go to top-tier schools.

"It’s hard to know exactly where the pressure is coming from," Lewis says. "The big picture is that schools are requiring more. There’s more competition for seats."

And few schools are more competitive than the Massachusetts Institute of Technology, where only 8 percent of applicants were accepted to the class of 2019.

Jordan Mann is one of those students. She and her mother Michelle visited MIT for an admitted-student weekend, taking tours and talking to current students. Jordan is the first woman from her high school ever to be accepted here. She got in to other schools, including Worcester Polytechnic Institute, but was blown away when MIT’s acceptance letter came in the mail.

“I was literally speechless," Jordan says.

Jordan and her parents looked at acceptance rates while sizing up schools.

"It wasn’t the biggest factor but I considered it,” admits Jordan.

And that's the same advice guidance counselors keep telling their students as they struggle to choose: Put prestige aside and choose a place where you just know you'll fit in.