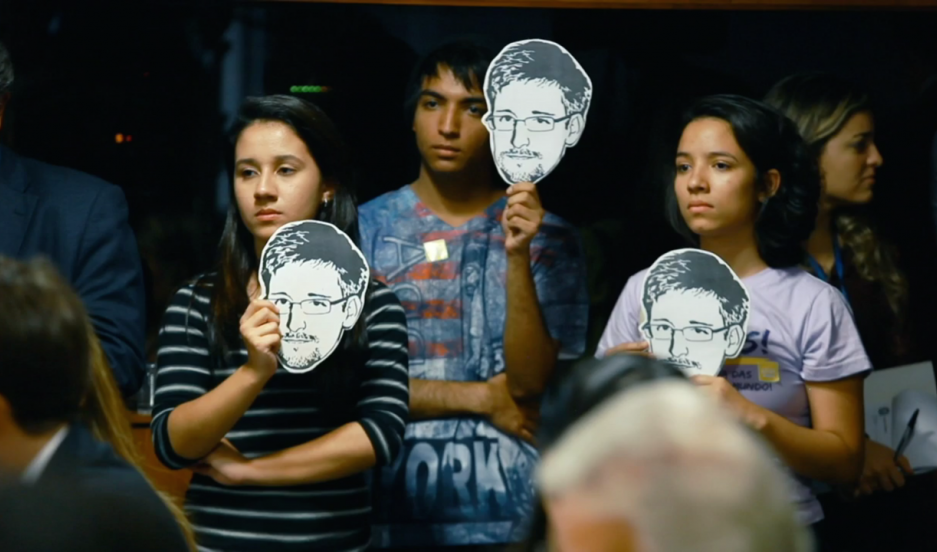 As depicted in the HBO documentary CitizenFour,Brazilian activist held Edward Snowden signs while Glenn Greenwald tesified before the Brazilian congress in August of 2013.

A scene from the movie CitzenFour.

Edward Snowden continues to have an outsized role in the global discussion around surveillance and Internet rights.

CryptoRave, perhaps the largest conference on cryptology and Internet privacy in Latin America, kicked off Friday in São Paulo, Brazil. Several thousand people, including young programmers, activists, hackers and self-described “cyberpunks” of all types are expected to attend the 24-hour marathon of  workshops, trainings, lectures, roundtables and, yes, some parties, all dedicated to cryptology, or the practice of using encoded digital communication to stop unwanted snooping.

But much has changed since the crypto movement took off in Brazil and Latin America two years ago. Activists are still concerned with the kind of US surveillance Snowden’s leaks revealed, but increasingly, they’re also asking questions about issues closer to home.

“I think it started thanks to Edward Snowden uncovering what the US is doing. And now everyone is turning to understand, ‘Oh, what is my government doing about my data in my country, where they actually have jurisdiction over me?” says Katitza Rodriguez, international rights director for the digital rights advocacy group the Electronic Frontier Foundation, and one of the keynote speakers at CryptoRave. “It’s not that they don’t care about NSA spying — they care — but actually all the discussion and the debate in the US have kind of informed the activists of the traditional human rights community to dig more into the surveillance infrastructure in their own countries.”

The movement around Internet privacy and security in Brazil grew dramatically in 2013 in the wake of Snowden’s leaks involving NSA spying on Brazilian oil giant Petrobras and government officials, including Brazilian president Dilma Rousseff. The story and its repercussions reverberated in Brazilian media for months. Gustavo Gus, a 28-year-old organizer of the CryptoRave festival, credits the Snowden leaks with laying the foundation for the cryptology movement in Brazil.

“If a diplomatic agreement between Brazil and the United State didn’t stop the surveillance of these powerful figures, what would happen with a common citizen? That’s what really touched the people,” Gus says.

It wasn’t long before digital rights groups started turning their attention to their own government. Activists were alarmed when the Brazilian Intelligence Agency, the equivalent of the CIA, announced that it would monitor protesters on social networks such as Facebook, Instagram, Twitter and the messaging service WhatsApp as the World Cup approached in 2014.

Now, with the Olympics set to occur in 2016, there is a widespread expectation that such domestic surveillance will intensify. For digital rights activists, this makes the crypto message more urgent.

“There was a big police state so there wouldn’t be protests against the World Cup. And now the Olympics are coming and we’re already expecting that anyone who has anything to say against it will be under surveillance,” Gus says.

Like a lot of the participants and organizers of CryptoRave, Gus is in his 20s. The conference doesn’t just have a heavy youth presence because of its topic. The price is also a factor — it’s free.

“It’s a very young audience. I get emails from parents asking if adolescent children need to be accompanied,” Gus explains. “When I was younger, I would have liked to go to events like this, but they didn’t exist.”

The uproar around the Snowden revelations also helped lay the groundwork for the passage in Brazil of what has been dubbed the Internet Bill or Rights, or the “Marco Civil.” While the bill has been hailed as internationally historic in terms of the protections it establishes for privacy and “net neutrality” in Brazil, the government still has to create the regulatory framework that will determine how it is implemented.

Many issues are still up in the air.  For instance, the bill establishes that police cannot monitor communications without a judicial order, but activists fear that part of the statute could be weakened when the regulations are spelled out. The government is currently accepting input on how the law should be enacted — even taking to Twitter to ask for feedback.

Sergio Amadeu, a political science professor at the Federal University of ABC and a leading digital rights advocate in Brazil, believes the CryptoRave conference is important as it is happening in what he described as a “tense” moment in the debate around Internet privacy and security in the country.

“The CryptoRave is a demonstration that the people believe in liberty and that privacy hasn’t died,” he says. “People don’t accept being watched all the time. It’s a message for the forces that want to control everything, be they in the United States or Brazil.”