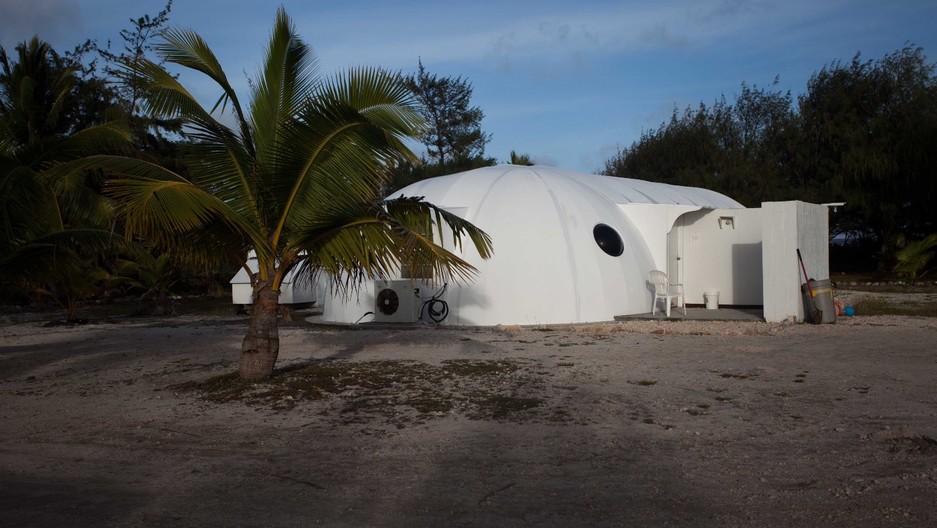 The US Department of Energy’s laboratory in Enewetak houses a full-body counter to detect levels of cesium ingested by individuals. It was out of service when we arrived on the atoll.

MAJURO, Marshall Islands  —  At first, quarantine hadn’t sounded so bad. A day and night at the Marshall Islands’ finest (and only) resort. A pool, a gym, a beauty salon. All meals included. A gorgeous view of the lagoon. Optimistically, we pictured a Pacific spa retreat.

We had just returned from a visit to the world’s only resettled nuclear ground zero. At the resort, the US Department of Energy would determine to what extent (if any) we were exposed to radiation: a 24-hour plutonium bioassay urinalysis would check for traces of plutonium-239 isotopes in our bodies, based on “measured urinary excretion patterns and modeled metabolic behaviors of absorbed radionuclides.”

In English: We were there to pee in bottles.

About two months ago, our three-person reporting team began to produce a GroundTruth multimedia series on the consequences of climate change and a still-potent US nuclear legacy in the Pacific island chain. Underpinning our reporting was one simple question: Why are Marshallese leaving their islands? And why do so many end up in Arkansas?

The Marshall Islands — a collection of 29 low-lying atolls dispersed across an area the size of Mexico — had been an unlikely Cold War player. The tiny nation became a laboratory for US scientists as they developed the hydrogen bomb. The 67 tests exploded from 1948 to 1958 was the equivalent of 1.6 Hiroshima bombs every day for 12 years. 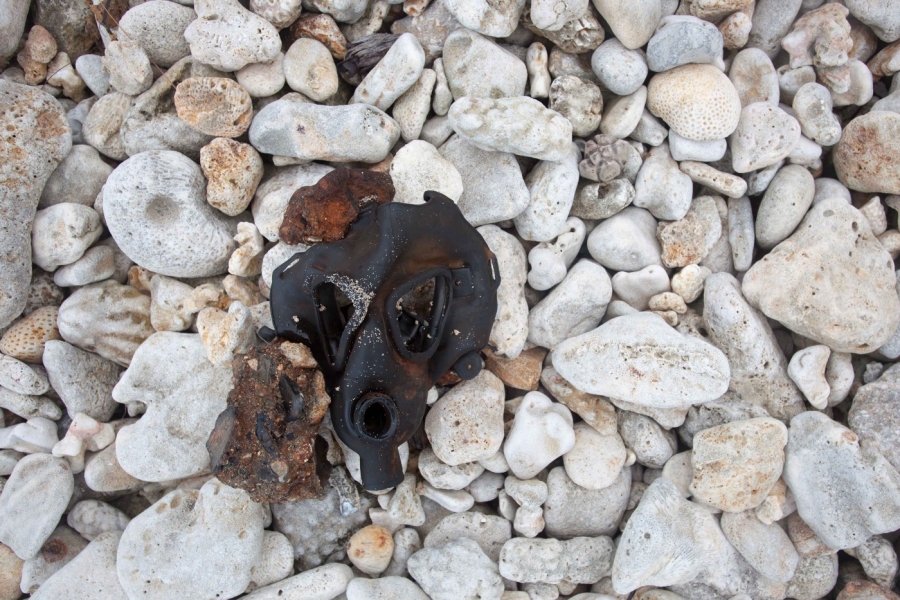 A gas mask from the era of U.S. nuclear testing resurfaced on the beach of Enewetak after Typhoon Bavi’s storm surge and winds.

Two of the Marshall Islands’ remotest atolls were designated US Pacific Proving Grounds: Bikini and Enewetak. Their residents were evacuated in the 1940s “for the good of mankind.” Only Enewetak had been resettled. Several other atolls, including Bikini, remain uninhabited due to fallout contamination (or fear thereof  —  the US is in the midst of persuading the people of Rongelap to move back more than three decades after canceling a resettlement plan). For many Marshallese, the atomic experiments were the beginning of a long, complicated history of exile and displacement.

The Marshallese word for radiation translates to “poison,” an invisible danger without smell or taste. Yet elements linger in the soil, finding their way into the human food chain via plants and animals. Radioactive isotopes are long-lived: plutonium, for instance, has a half-life of 24,400 years. 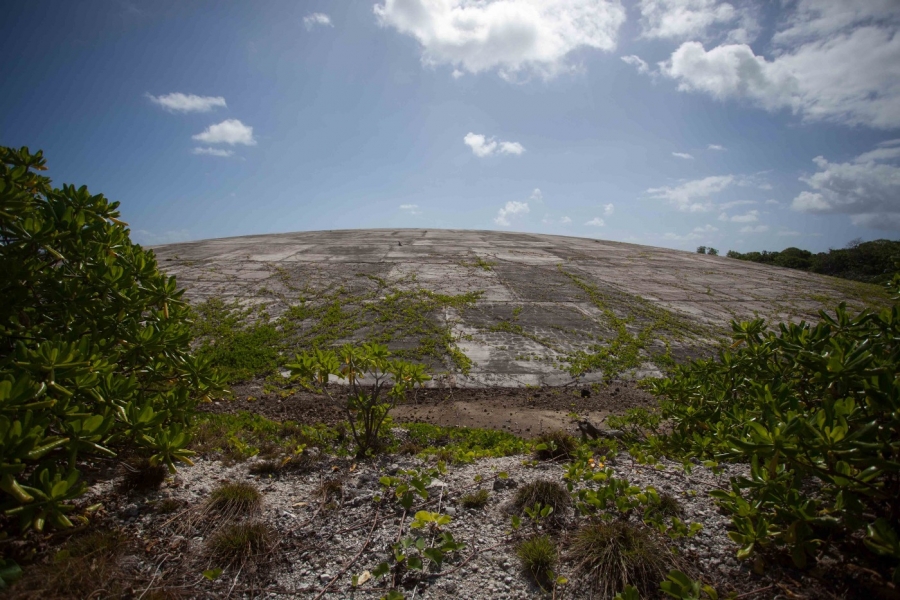 The “Cactus Dome,” a nuclear waste site on Runit island, remains a relic of US presence in the Marshall Islands.

We had journeyed 600 miles north aboard a tiny government provision ship across the open ocean, to Enewetak  —  an atoll site to 43 atmospheric bomb testings, including the first-ever hydrogen bomb. There, the radioactive relics of America’s nuclear past were placed in a detonation crater and covered by 377 concrete panels, the Cactus Dome.

After three decades in exile and an ambitious American cleanup effort, a few hundred people had returned to their homeland — with a nuclear waste site in their backyard. An even larger community resides in Hawaii’s Big Island. A single landline and a modem, turned into a Wi-Fi hotspot used by the entire island, embodied Enewetak’s isolation, becoming the only and painfully slow connection to the outside world. As we tried to understand the complex push-and-pull factors of inter-island and global migration, Enewetak seemed the perfect starting point.

How does one prepare to visit to a nuclear wasteland? Radiation can be absorbed by the human body externally as well as internally, wrecking havoc on any cells in its way. We tried avoiding both routes: a diet of granola bars and canned goods would minimize uptake of possible radionuclides via local food. Face masks, courtesy of the Department of Energy, would protect from inhalation of irradiated dust particles.

A Geiger counter would monitor for dangerous levels of radiation. Despite the 90-degree heat, we wore yellow dish-gloves and long sleeves to cover every possible inch of exposed skin. As we climbed 4,700 cubic meters of radiologically contaminated debris, with 18 inches of cracking concrete separating us from an array of radioactive isotopes, we looked like a hybrid of the Ghostbusters and a house cleaning team.

Back at the resort, Judith Honda had flown in from Hawaii to take care of us. We weren’t sure why  —  the DOE already had several representatives on the ground  —  though she told us later she had to deliver a tax form anyway. She, too, had been asked to do the bioassay quarantine.

The four of us were the only participants. There would be another group the following weekend.

Straight from airport to resort, Judith wore dark sunglasses indoors as she handed out room keys and consent forms. She explained the rules: sleep in separate rooms, eat food delivered to the rooms, no visitors, no alcohol or smoking. All urine was to go in bottles and we’d use a Sharpie to note the level and time of each bathroom visit. Finally, we were not allowed to leave our respective rooms for 24 hours.

We objected. What difference would it make, as long as we ate the food and stuck to the bottles? With only days left on the island, we had work to do. Besides, the hotel Wi-Fi was $5 per hour and most TV channels were in Korean, Filipino or Chinese.

“Talk to Terry,” Judith shrugged, handing over her cell phone. She was there for logistics only, not to make decisions.

After a few minutes of negotiations, we regained our freedom of movement. Normally rules could not be bent, explained Terry Hamilton, Scientific Director of DOE’s Marshall Islands program. The protocol, he admitted, might be over-the-top in our case.

Assuring Dr. Hamilton of our commitment to a reliable plutonium count, we promised not to run away.

The rooms weren’t exactly the glamorous tropical getaway advertised on the resort’s website. And the idea of sleeping alone was luxurious, foreign and somewhat intimidating. This would be our ninth accommodation in the islands. Until now we had shared a room or cabin, and often a bed or floor, every night since we arrived.

We were given one white polystyrene box per person. The items inside were, by turns, obvious, science fiction-like and outright absurd:

We each received 1.6 gallons of fluid to consume at our convenience over the next 24 hours. Written instructions generously offered additional bottles upon request. 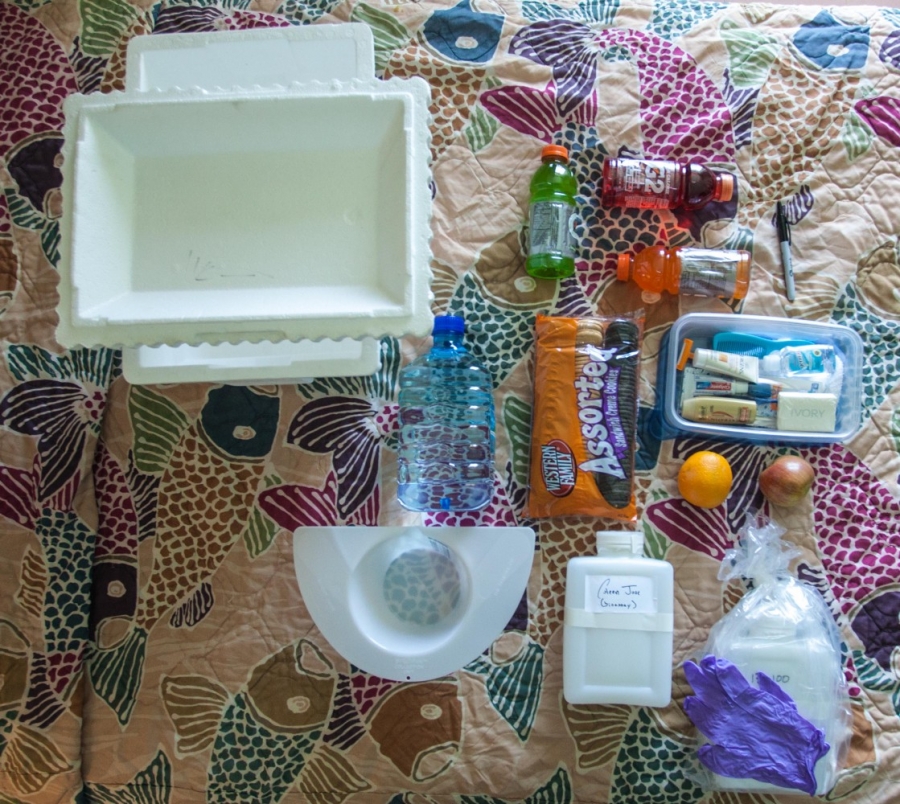 The DOE-funded quarantine provided cookies, bottles and other amenities.

As she left, cheerfully announcing she would see us in the morning, the first meal arrived: a plastic bag with a white polystyrene box inside, containing a dry, lukewarm cheeseburger with unsalted fries and a sachet of ketchup.

From there, the food got progressively less resort-like: ‘teriyaki’ steak with rice, salad and ranch dressing for dinner, a breakfast of scrambled eggs, spam, pancakes and coffee mysteriously served in cups from an artisanal Norwegian roaster.

From our balconies, the sea was turquoise and calm. After a week of rain, the weather was lovely. The pool (the island’s only) looked irresistible. At sunset, the Billfish Club gathered downstairs, its members comparing swordfishes, weighing wahoos and taking selfies in front of a Budweiser sponsor banner.

Cabin-fevered and paranoid, we looked back at our potential radiation exposure. We had walked on the Cactus Dome twice, a couple of hours each time. We spent 10 days in total on Enewetak, including the annual Liberation Day celebrations, where we were considered honored guests, the first journalists to Enewetak in years, and received a large woven palm leaf basket of local specialties: breadfruit in all its shapes and forms, roast pork, pandanus fruit, unidentified seabirds and coconut crabs.

Though we planned to avoid local food, we couldn’t decline. 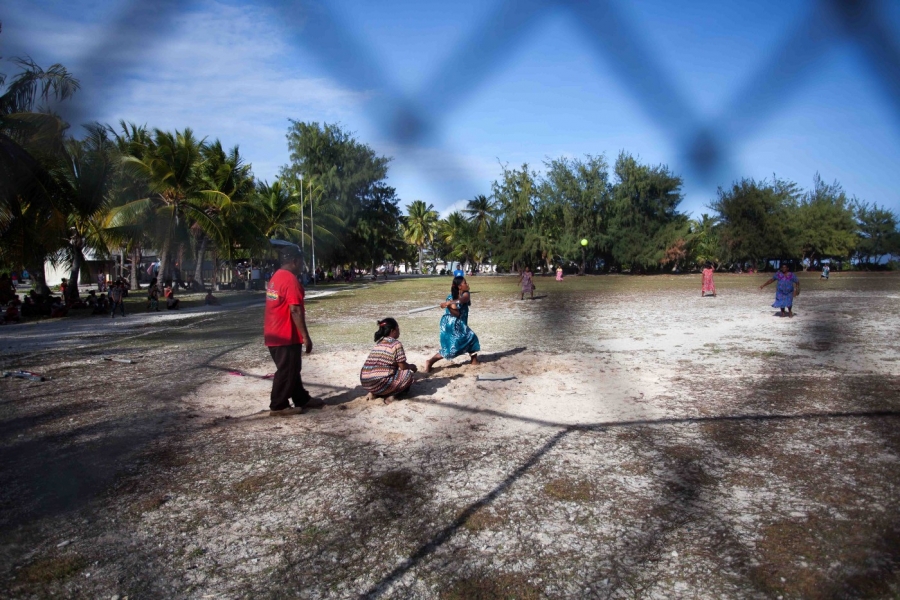 On March 10, Enewetak celebrated Liberation Day to mark the US military’s defeat of Japanese forces during World War II.

Despite their proximity to a nuclear waste, the Enewetakese had not been given any food restrictions. Not once had our Geiger registered levels higher than our control test at Columbia University’s campus in New York City. Then again, we worried, the DOE had admitted to having dumped irradiated debris in the lagoon over decades.

A 2013 report acknowledged the cracks in the dome but downplayed risk: the outside was already more contaminated anyway. With data on Enewetak’s current radiological situation scarce, non-existent or classified, it seemed impossible to know anything for certain.

Dark humor helped us cope: Did we glow in the dark? Did our urine? How many new, additional limbs would we grow? Would we return as the human glow sticks?

Of course, it was terrifying. Labeled the most toxic substance on earth, plutonium isn’t a joke: one notorious (though questionable) theory says that one pound would be enough to kill 8 billion people.

Since 1980, Enewetak had been deemed safe for permanent resettlement by US government-affiliated scientists. Then again, so was Rongelap in the 1970s before Greenpeace’s iconic Rainbow Warrior intervened to rescue radiation-sickened and scared residents. Bikini too had seen a short, ultimately canceled repatriation effort. Today, mistrust in the DOE is endemic across the Marshall Islands, where many residents accuse the US government of using them as “guinea pigs” to research the effects of radioactivity on the human body.

As our urine was flown off to Kwajalein, home of the top-secret American military base we had been unable to visit ourselves, we knew we wouldn’t find out the results for another 12 months.

This story by Coleen Jose, Kim Wall, and Hendrik Hinzel is part of a project on the Marshall Islands in the era of climate change, a new reporting series from The GroundTruth Project. You can read the previous story from the project here.