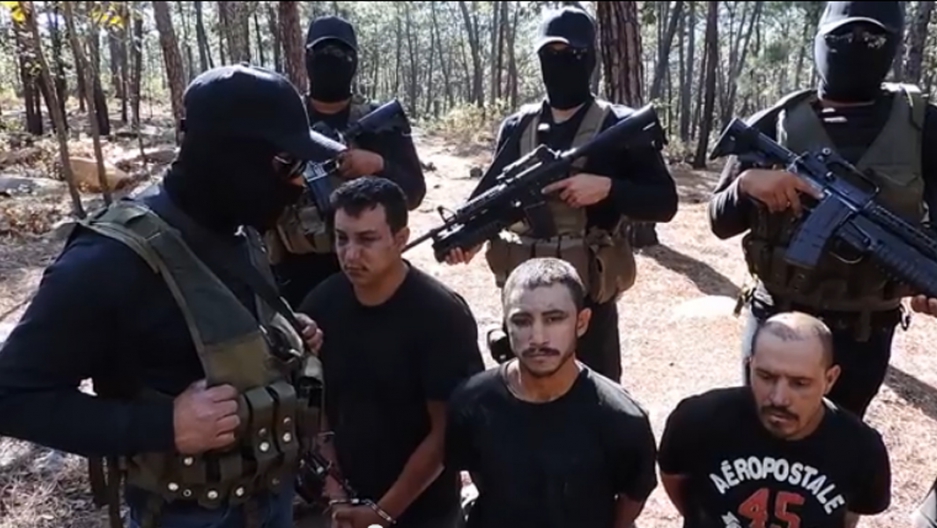 MEXICO CITY — From the outside, the two buildings looked like thousands of other farmhouses in Mexico’s agricultural heartland of Jalisco, where products include potent tequila. But when police raided them in October, they found industrial metal cutters, blowtorches and bullet cartridges.

A drug cartel had used them, Jalisco investigators revealed, to assemble their own AR-15 assault rifles.

The same cartel has hit the news again with a series of assaults on police and officials. On Monday, gunmen ambushed a convoy of state police in San Sebastian del Oeste, killing 15 officers in one of the worst attacks on police in recent years.

That followed attacks last month, too. On March 20, in the town of Ocotlan, a dozen trucks of gunmen ambushed federal police, killing five officers. On March 31, cartel thugs attacked the Jalisco security commissioner causing a shootout in an urban area of Guadalajara.

The offensives and gun factories show how the New Generation is defying the government’s crackdown on traffickers. The cartel is also expanding its territory, with tentacles stretching from its base in the midwestern state of Jalisco as far as Cancun in the southeastern tip, and even up to the border with Texas.

“It is spreading like a cancer in Mexico,” says Mike Vigil, former head of international operations for the Drug Enforcement Administration. “It’s the fastest expanding cartel and they could in the near future overtake the Sinaloa cartel as the most significant organized group in Mexico.”

More from GlobalPost: Where are Mexico’s top 10 drug lords now?

The Jalisco leader Nemesio Oseguera, alias “El Mencho,” has not only survived this onslaught but also pushed into other weakened gangs’ turf.

The New Generation has expanded particularly in western Mexico’s Michoacan state, where the Knights Templar cartel has been shattered, leaving a trail of bodies with threatening notes.

The Jalisco cartel is also linked to some vigilantes operating there, according to Mexican prosecutors.

The rise of the Jalisco gang at the expense of other cartels illustrates the long-running problem in fighting drug trafficking.

“It is like the proverbial hydra. When you chop off one head, another grows in its place.”

“It is like the proverbial hydra. When you chop off one head, another grows in its place,” says Vigil, now a consultant who has advised Mexican security forces and author of the book "Deal."

“One issue is that while the Mexican government has done a good job hitting the kingpins, it also needs to go after the corrupt officials, money laundering, and the infrastructure of cartels,” he adds.

Strategically placed in the heart of Mexico, Jalisco has long been home to drug traffickers, with the Guadalajara cartel operating there back in the 1980s. But in the 1990s and 2000s trafficking power shifted to border cities like Tijuana and Juarez, and the drug producing hills of Sinaloa.

The Jalisco New Generation cartel was born after the Mexican army shot dead a dominant regional trafficker called Ignacio Coronel in the Guadalajara urban area in 2010.

Coronel's younger followers and their associates formed the new mob, and stepped up the violence to repel the rival Zetas, who were encroaching on the area. Jalisco New Generation is blamed for mass killings: One left 35 corpses of alleged Zetas dumped on a street in Veracruz in 2011; another, 14 hung from meat hooks in the border city of Nuevo Laredo in 2012.

In total, Mexican cartels or the official security forces fighting them have killed more than 83,000 people since 2007, according to a count by Mexico’s federal intelligence agency.

Along with its bloodshed, the Jalisco New Generation has released propaganda videos, where they show off their guns and claim they defend citizens against more predatory cartels.

This video illustrates the level of firepower they have.

However, federal prosecutors say that while the Jalisco mob claims to protect people, it carries out its own shakedowns and kidnappings.

“It is a very dangerous organization. It operates on a local level, hitting business, like other newer cartels. But it also has international trafficking links like the older cartels,” a prosecutor from the Mexican government’s organized crime unit told GlobalPost. He did not want to be named because he’s not authorized to speak to media on the topic.

Masked women on this video also accuse the Jalisco New Generation of extorting businesses and urge people not to pay.

Innocent bystanders also sometimes get hit by stray bullets. Three residents were killed during the gun battle after the recent attack on federal police in Ocotlan. One of the victims was 15-year-old Isaac Solis.

At the end of last month, hundreds of people dressed in white marched through the town holding photos of Solis.

“We want peace, that is all we are asking for today,” a protester said. “This is one march. But that has to be many more.”