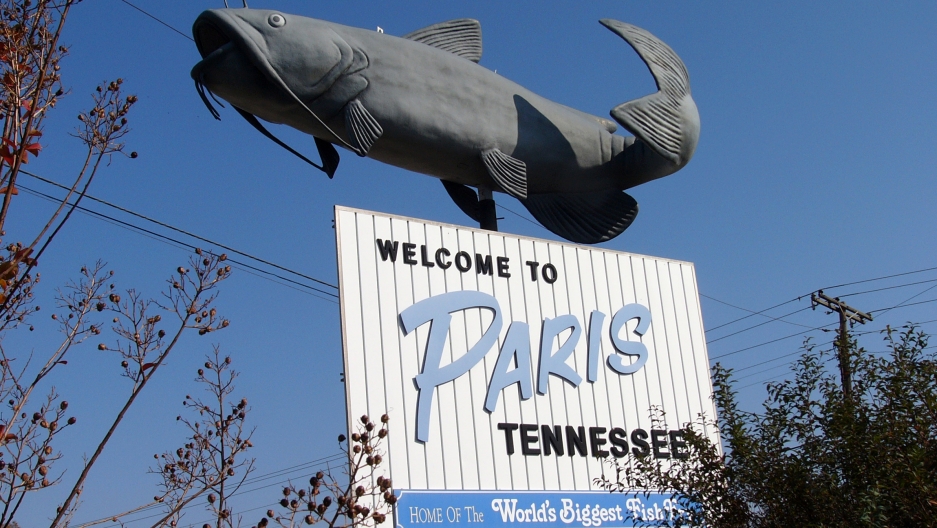 Paris, Tennessee, is home to the self-described biggest fish fry in the world — and a high risk of health problems.

The Sulphur Well Church of Christ sits in Henry County, Tennessee, a few miles outside of Paris, the small town claims to host the world's biggest fish fry. But in a place where thousands people flock to devour deep-fried catfish, the church is leading a charge to locals to eat and think healthier.

According to the American Communities Project, which uses census data to find new ways to analyze the population, calls Henry County an "Evangelical Hub." Paris alone is home to more than 160 churches, about one church for every 195 people. But many of those congegrations give little thought to physical health along with spirtual wellbeing.

"We do draw some hard lines on alcohol, and tobacco use and tattoos — we think, ‘Oh, you’re not taking care of our temple that God has given you,’” says Bob Palmer, the lead pastor at Sulphur Well Church of Christ. “The problem is that we haven’t looked at it holistically. We’ve just kind of picked out the things we weren’t going to do anyway and we feel self righteous about that, that we don’t do them. And then we’ll take a number five and super-size it.”

Then he saw some data. The Takeaway combined information from the ACP and the County Health Rankings Report — a project by the Robert Wood Johnson Foundation that measures health risks like obesity, smoking rates and air quality across the country — and showed it to Palmer. He says it was an eye-opener.

"One of the things that was striking about these numbers, and it's something I've known to be true ... [is that] there’s a sense that when we confirm someone’s spiritual health and give them a thumbs up and an A-OK, that’s often the end of the rehabilitation process,” he says.

In Palmer’s county, the rate of physical inactivity is high — nearly double the inactivity rates of some of the healthiest states.

“Maybe that’s an indictment on what we’ve been teaching,” he says. “I’ll say this: If I were an outsider to faith and the church in any context, and all I had were these numbers to go on, it would not be attractive to me at all. If anything it might make me run in the opposite direction [and say] 'Wow, your quality of life is really poor statistically.”

In Tennessee, the Governor’s Foundation for Health and Wellness is trying to help groups like churches boost poor health in Evangelical hubs through an initiative called Healthier Tennessee. “It’s a wellness program and an online wellness tool that provides faith leaders with tips, ideas and actions to get their members healthier," says Molly Sudderth, the director of communications at the foundation.

That can mean linking activity and exercise to small acts of faith. “One of them is ‘Walk and Worship,’” says Barbara Kelly, a public health educator. “So you can walk and pray for those who you feel need extra prayers, or are going through difficulties or maybe just some lifting up. So there’s a lot of things that maybe we just haven’t thought of before.”

While Healthier Tennessee's "Small Starts" program is underway in about 150 churches statewide, but none of those are yet in Henry County. While Sudderth says she expects the number of churches to grow, Palmer says there could be some stigma tied to healthy living in this largely conservative area.

“Right-wing religious folks have kinda viewed that as ‘liberal’ thinking," he says. "But that hasn’t been correct, I don’t think. At all. Just read through early Genesis and the very first commission that God gives anyone is to essentially take care of this created world. We don’t talk about that very often for some reason — to our detriment, and these numbers reflect that.”

Palmer knows he might be a bit of an outlier, but he hopes others will follow. Not only for the sake of community health, but to maintain his flock.