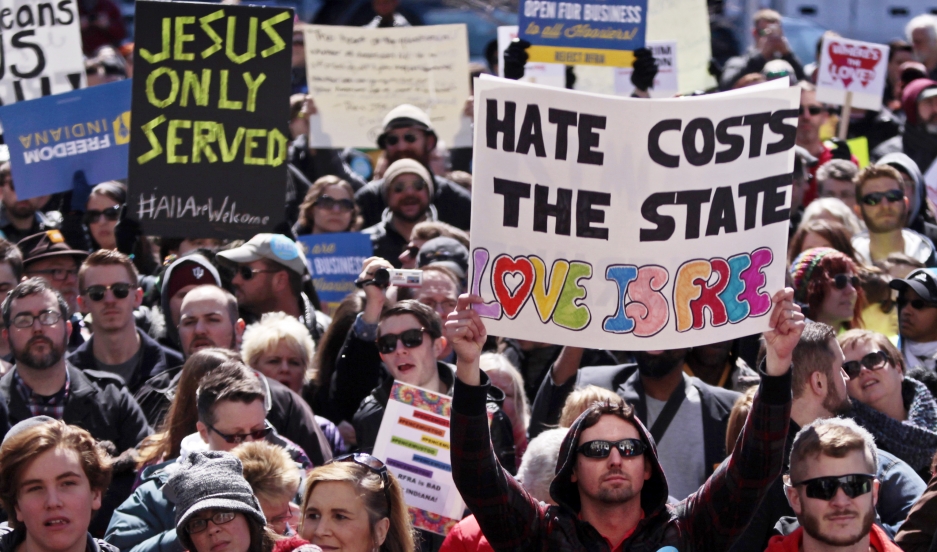 Demonstrators gather at Monument Circle to protest a controversial religious freedom bill recently signed by Governor Mike Pence, during a rally in Indianapolis on March 28, 2015.

After Indiana Governor Mike Pence approved his state's religion freedom law last week, several major companies announced they would reconsider doing business in the state. Some musicians, such as Wilco, have even joined in the call, saying they won't perform in Indiana until the law is changed. But do their voices really matter?

Since 2005, for example, Israel has been the target of a cultural boycott. Artists like Roger Waters, Elvis Costello and Annie Lennox have publicly supported the "Boycott, Divestment and Sanctions" movement, a group attempting to use economic pressure to force Israel to withdraw from the Palestinian territories. Yet stars like Lady Gaga, Madonna, Rihanna and Alicia Keys have all ignored the boycott and performed in the Holy Land.

But there is one case where a cultural boycott made a difference.

In 1985, South Africa was still divided by apartheid, and the Sun City casino and resort was a shining example of that divide. The South African government had forcibly relocated the local black population to create the whites-only vacation spot.

The music video, which aired on MTV, even showed footage of clashes between black South Africans and police.

Sun City became a no-go for musicians, and the song re-energized the global anti-apartheid movement.

But it's hard to imagine something like Sun City happening today. In Indiana, a group of the state's indie record labels has even condemned artists cancelling shows, saying a boycott is not the best way to achieve change.