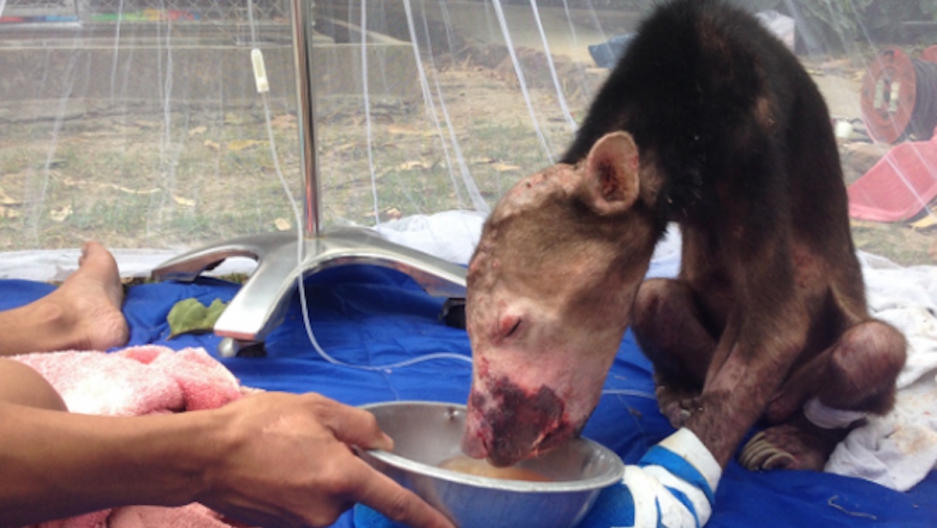 This is Kwan, a badly emaciated sun bear. It was being kept in a tiny cage by unscrupulous Buddhist monks who are trying to make money by running a makeshift zoo in Thailand. Before being rescued by the Wildlife Friends Foundation Thailand, Kwan had been terribly neglected.
Share

BANGKOK, Thailand — The creature in this photo looks otherworldly. It’s lean as a dog with an opossum’s pink snout and the lanky limbs of a primate.

But it’s actually a bear — one so shriveled by neglect that its species is barely recognizable.

This bear, named Kwan, was a 3-year-old sun bear. In the wild, the animals have lovably dopey faces and a brilliant golden crescent of fur on their chests. By day, they laze in the Southeast Asian heat. By night, they snack on berries and rodents.

But Kwan has been confined to a tiny cage at a Buddhist temple in Chumphon, a sleepy province in Thailand’s south. The bear — shrunken and covered in sores — was discovered by Wildlife Friends Foundation Thailand or WFFT, an organization that rescues endangered wildlife from negligent owners.

In this case, the negligent owners are Buddhist monks.

This is what a healthy sun bear looks like.

This bear’s plight is an extreme example of the dysfunctional relationship between Thai monks and rare animals.

In staunchly Buddhist Thailand, temples are used as a dumping ground for unwanted creatures. Sick of your cat or dog? Abandon it at the temple where kindly monks, sworn to honor life, will feed it leftover rice from their alms runs.

But sometimes more exotic animals — bears, monkeys or rare birds — are forced onto temples. Some shrug and try to care for them the best they can. Less scrupulous monks will subtly encourage people to drop off more exotic fare so they can create a tourist attraction that draws in loads of visitors and donations.

“When you have six bears, three gibbons, five monkeys, then it’s not a coincidence anymore,” said Edwin Wiek, founder of WFFT. “It’s a business.”

Kwan the bear was being held at a temple that appeared to be cultivating a terribly run “mini zoo,” he said. His organization says they’ve spent three years warning authorities about the operation, which is still housing gibbons, bears and other animals in filthy cages.

“The government keeps saying, ‘We’ll take these animals away,’” Wiek said. “But it’s not getting any better. So I decided to put these photos online.”

Most Buddhist monks caring for animals mean well, Wiek said, but they lack the expertise to house creatures meant to live in the jungle. “Many monks are happy to see us,” he said. “They say, ‘Oh, you’re the guys from that wildlife rescue center? Please take that monkey away!’”

But the temple that neglected Kwan, he said, more closely resembles a commercial enterprise stocked with sickly animals. Of the temple’s six bears, two have died within the last week. One of them was Kwan. The bear was rushed into treatment by WFFT but succumbed to illness on March 15.

The other animals are still in the temple’s care.