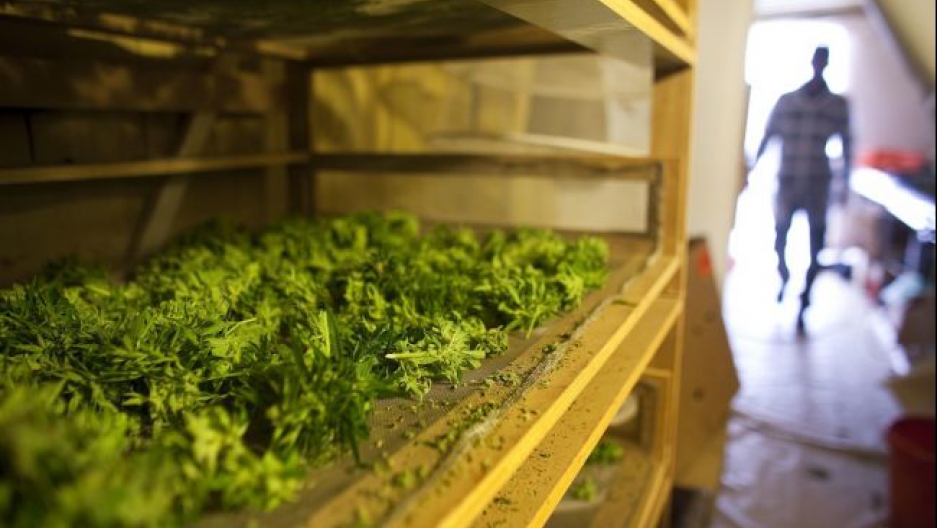 Cannabis is set to dry at the Tikun Olam growing facility on March 7, 2011 near the northern city of Safed, Israel.
Credit: Uriel Sinai
Share

In February, its senate approved a bill that decriminalizes consuming the soft drug, adding to the gathering global momentum toward ending the so-called war on drugs.

Here GlobalPost runs down other countries that allow, in one way or another, cannabis, as well as a few that continue to take a tough stand against it. We’ve assigned “smokeability” ratings to describe the ease of access, legal or illegal, with 0 being awful, and 5 being the easiest.

If there is such a thing as the cannabis capital of the world, then it is probably Jamaica. The Caribbean island’s culture, including iconic reggae tracks such as Peter Tosh’s "Legalize It," is permeated with ganja. Rastafarians even regard it as a central part of their religion. After last month’s historic vote, indiscrete users now will pay a small fine but acquire no criminal record. The law also exempts smoking for religious purposes, meaning the island’s Rastafarians don’t even have to worry about that. The days when the late reggae superstar John Holt used to sing his anthemic “Police in Helicopter” are now well and truly at an end.

Rolling papers for sale at the first shop dedicated to cannabis merchandising in Montevideo, on April 24, 2014.

This tiny South American nation will forever occupy a hallowed place in the history of the global “green revolution.” In 2014, it became the first nation in the world to fully legalize the recreational use of cannabis. As if that wasn’t enough, the Uruguayan state will even produce and sell the herb to potheads consumers. It’s not that 79-year-old Jose Mujica, the ultra-chill president at the time the law was passed, thinks getting wasted is a good thing. But, unlike quite a few politicians, he knows that the reefer madness-style myths peddled about the soft drug have nothing to do with the reality of consuming cannabis, and believes that the harm — including violence — often linked to the underground drug trade is far worse than, say, a killer attack of the munchies. The law has not been without problems. And before you hit Kayak looking for a cheap flight to Montevideo, bear in mind that only permanent Uruguayan residents, not tourists, are actually allowed to buy grass there.

People demonstrate for the legalization of marijuana in front the National congress building in Asuncion, Paraguay, on Dece. 20, 2014.

You might think that Uruguay’s near-neighbor would also be a neat place to get blitzed, not least because it’s the world’s second biggest producer of weed after Mexico. But you’d be wrong on two counts: first, Paraguayan grass — which sells like hotcakes in shantytowns across much of South America, especially Brazil’s favelas — is famous for being cheap and nasty, leaving smokers with a hacking cough and throbbing headache. Second, despite the copious quantities of herb grown in its lush, tropical backcountry, actually smoking the drug in Paraguay remains illegal. Although there have been recent attempts to change that, one person who’s not interested is the conservative president Horacio Cartes, who once raised eyebrows with the claim that he had “seen former high school classmates suffer and die because of the effects of marijuana.”

Rolling joints at a coffee shop in Amsterdam.

The granddaddy of them all when it comes to allowing stoners to do their thing without becoming outlaws is Holland. Yet, although Amsterdam’s pot cafes have long been legendary as safe havens to smoke a spliff and enjoy a cappuccino and brownie, cannabis is not actually legal anywhere in Holland. However, the government recognizes that hash and pot are relatively harmless drugs, at least compared to the likes of heroin or crack, and that many consumers are not deterred by prohibition. It therefore allows cafes to sell up to five grams (a bit more than an eighth of an ounce) per adult. The establishments are tightly regulated and banned from advertising cannabis. Treating adults like adults seems to be paying off. The country boasts the lowest death rate from drugs, at 2.4 per million residents, in Europe.

Smokeability: 1 (Even if it’s allowed, you’d have to be high to want to go there to get stoned.)

Know what you're getting into before you cross this border.

Believe it or not, the world’s most repressive regime appears to have no issues with its people sparking up. That’s despite regularly executing those caught with crystal meth, a serious problem in a country where everyday life could hardly be bleaker. Indeed, the Orwellian “People’s Safety Agency” has explicitly told puffers not to worry even as it warns of the firing squad for meth users. Yes, you read that right — not meth pushers but users. Visitors to the country report seeing Mary Jane plants growing wild all over the place. The low-quality bud is also said to be freely available in markets and dirt cheap. Thanks to the obsessive secrecy of Dennis Rodman’s favorite totalitarian dictatorship, it’s unclear whether cannabis is technically legal.

Portugal has decriminalized drug use, but still tries to fight it. Here, several tons of seized cocaine.

Back in 2001, Portugal became the first nation in Europe to fully decriminalize consumption of all drugs. That doesn’t mean lighting up is legal, just that you will not be treated as a criminal if you are found in possession of a quantity of cannabis that is less than what authorities deem one individual would consume in 10 days. That definition gives cops and the courts plenty of discretion, given that hardcore stoners like Snoop Dogg could probably smoke a small forest in that period. Equally, users of hard drugs are treated as people with health problems rather than anti-social crooks. Portugal, however, doesn’t have official places to buy or smoke pot, unlike its neighbor Spain, which now has a booming industry and 700 cannabis clubs, half of them in Barcelona, that sell grass and hash to members.

The sanctioned beer is non-alcoholic, but you can still find ways to smoke weed in Iran.

Surprisingly, perhaps, for a country where booze is banned, the mullahs don’t seem to have an issue with the herb. Although technically illegal, cops turn a blind eye to the widespread weed-smoking — not to mention ganja-themed T-shirts— that has been going on in Iranian society since before anyone can remember. If you’re really unlucky, you may be fined 1,000 rials (now worth just over 30 US cents) per gram (roughly one thirtieth of an ounce) of weed you are caught with. In fact, Iran is hardly out of step with much of the Muslim world. Smoking marijuana publicly is routine in Pakistan and Egypt, even while the former has seen schoolgirls shot for, well, being female in school, and the latter locks up opposition activists and foreign journalists. In Bangladesh smoking is a national tradition, untroubled by the government’s commitments under various international counter-narcotics treaties to stop it.

Smokeability: 3 to 5, depending on the state

Federal laws criminalizing cannabis consumption are now being overtaken by the gathering trend of states relaxing their laws, married to the Obama administration’s decision not to pursue smokers. As with so many groundbreaking trends, California was the pioneer. Doctors there have long been allowed to prescribe the soft drug for all kinds of ailments, from insomnia and anxiety to back pain. The Golden State has been criticized for allowing recreational users to get such prescriptions — but it’s now been overtaken by Colorado, Washington state, Washington DC, and Alaska, which all recently allowed recreational use following state referendums. Various other states are now debating following in those footsteps, although there are places, such as Texas, where law enforcement still takes a hard line with users, confiscating the drug and fining smokers.

Police destroy a small crop of marijuana plants in 2007 in Stavropol, southwestern Russia.

As you’d expect of a country run by Vladimir Putin — a teetotaler, by the way— Russia has tough laws about drug use, including cannabis. Although use is not criminalized, laws make no distinction between soft and hard drugs. In practice, if you’re caught toking away, you can probably resolve the problem by bribing corrupt — and underpaid — cops, according to travelers’ reports. With heroin use soaring, the government has no intention of relaxing cannabis laws, with Putin’s handpicked anti-drugs tsar Viktor Ivanov recently claiming it is a gateway drug and even warning that legalization could lead to stoned operators at nuclear reactors screwing up and causing a meltdown.

Get caught with drugs in Malaysia and ending up in court will be the least of your worries.

This nation has some of the harshest drug laws in the world. Possessing a single joint here can get you locked up for five years. If that sounds tough, then consider the mandatory death penalty for anyone convicted of drug-running, which in the case of marijuana means being caught with more than 200g (just over seven ounces). You might think Cheech and Chong’s brand of bong humor is lame, but would you really want to see the pair hanged by the neck until dead? Several Southeast Asian neighbors also have draconian legislation, but none quite like Malaysia. Singapore had an identical law but revised it in 2012to allow the judge discretion to impose a life sentence — plus a good caning — instead of execution.

Hemp cosmetics for sale at a Bosy Shop store in Hong Kong.

Another country where you don’t want to be caught pulling hard on a customized Swisher Sweets cigar. The Asian giant throws pot users behind bars — in some cases for years. Just ask Jaycee Chan, son of martial arts legend Jackie Chan, who was busted in Hong Kong last August and was sent down for six months. Yet Beijing is conflicted about the soft drug, at least when it comes to medical marijuana. As befits a country where cannabis brews have been part of traditional medicine for millennia, China is now poised to dominate the market for cannabis cures, with more than half the 600-odd cannabis patents filed with the World Intellectual Property Office coming from there.

As you might expect of the place that Rastafarians regard as their spiritual home, ganja is largely tolerated here. It’s illegal, and there are reports of arrests, but if you smoke discreetly, you are unlikely to face major issues, according to visitors to the landlocked nation near the heart of Africa. Weed is commonly available and trying the local hash is, apparently, strongly recommended.