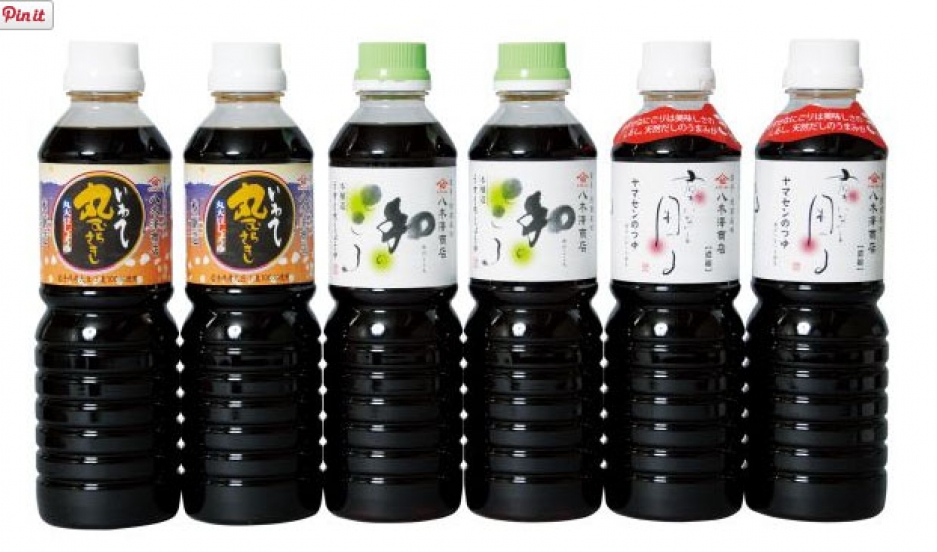 A variety pack of soy sauce for soups offered by the Yagisawa Shoten Co.

After the deadly 2011 tsunami in Japan, nothing was left of the Yagisawa Shoten Co. — a 208-year-old soy sauce company in the northeastern part of the country.

The entire inventory was washed away in the 55-foot-high waters. An employee of Yagisawa was killed. Six other employees lost family members in the tsunami, which also caused the failure of the Fukushima Daiichi nuclear plant to the south.

A bottle of the Yagisawa Shoten Co's "Miracle Sauce" which is fermented from the 'mash' that owner Michihiro Kono saved from the 2011 tsunami.

And on top of all that, the crucial fungal matter that gives soy sauce that unique flavor was also gone.

Or thought to be. Researchers found Yakasawa fungal matter in containers at a laboratory — where the company had donated them for cancer research before the tsunami.

And Michihiro Kono, after a long struggle, was on the road to a comeback. Kono, 41, is the ninth generation son of the founding family behind Yagisawa and took over for his father after the tsunami.

Even before the soy sauce breakthrough, Kono kept the company running. He maintained a salary for his 38 employees — who were initially asked to hand out clothing and emergency food supplies to tsunami victims. A Tokyo crowd-funding site called Music Securities Inc. heard about Kono's endeavor and helped collect $1.5 million for the soy sauce company. By May 2011, just two months after the devastation, Yagisawa was selling products again — just not their own. They began to build a new factory at a town near Rikuzentakata where a large school once stood.

With the discovery of the fungal matter, Yagisawa began making its own soy sauce again. By May 2013, it was selling it.

Though the company has yet to make a profit, their sales are "back to about 70 percent of pre-disaster levels," according to the AP.

But Yagisawa has found new customers — including a restaurant in France. Where they once sold their soy sauce to other Japanese businesses, now Yagisawa is selling everything from miso paste to soy cakes, T-shirts to their famed soy sauces directly to customers.

"If you don't give up, no matter how painful it gets, there will always be a way." Kono said.

A tweet from January, celebrating the distribution of Yagisawa's 'miracle' soy sauce.