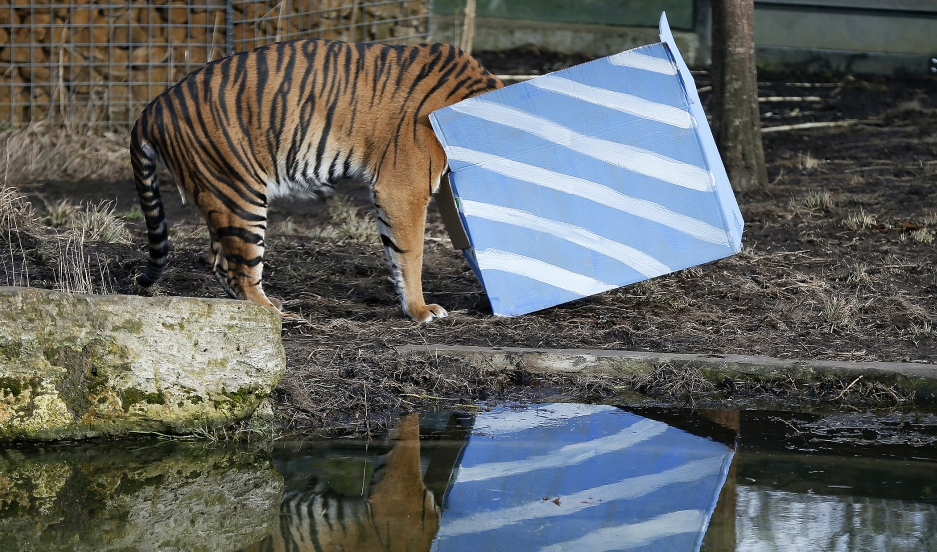 Sumatran tiger Melati looks inside a present box put out to celebrate the first birthday of her cub triplets in their enclosure at the London Zoo on February 4, 2015.

Zoos have a long history. As early as 2500 BC, Egyptian aristocrats created menageries; in 1520, the Aztec Emperor Montezuma II maintained one of the earliest animal collections in the Western Hemisphere.

Today about 175 million people visit zoos across the globe every year. But despite their history, as well as arguments from conservationists and educators that they're necessary, Outside Magazine contributor Tim Zimmermann says it's time that zoos permanently close their gates.

“What we definitely know is that many animals suffer in zoos," Zimmermann says. "There are high mortality rates, there are injuries and there’s depression. The science and research also shows that wide-ranging animals — the animals that are most popular for people to see, like tigers and bears — are the animals that do worst in the zoos."

He argues there are plenty of other ways to see and learn about animals in the modern age, everything from visiting your own backyard to watching YouTube videos and televised nature specials. Zimmermann says it’s also unclear what people actually learn from visiting zoos.

Zimmermann isn’t launching an all-out attack on zoos; he concedes many have made an effort to improve the facilities that house animals. But that can't hide the fact that certain animals simply do not do well in zoos, he says. Many facilities even employ anti-depressants to curb the unhappiness felt by animals.

“No matter how natural the tiger enclosure is, for example, it’s still minuscule compared to the range a tiger in the wild would have to roam,” Zimmermann says. “If you want to teach people about tigers and get children excited about tigers, there may be a better way to do that.”

Though many argue that zoos serve a purpose in terms of conservation, Zimmermann’s research has found that’s just not the case. “Less than 1 percent of the species kept in zoos are actually part of serious conservation [efforts]," he says. "I think much more could be done by targeting specific species that really do need conservation.”

In fact, he argues, zoos can actually harm more effective measures of conservation in the long run.

“There have been studies done on how people think about conservation and the future of species in the wild,” he says. “That sort of research shows that seeing animals in zoos cared for by humans, and hearing about a zoo’s conservation plans, reintroduction plans and breeding plans sometimes tends to make people think that animals are doing better in the wild [than they really are.]”

Zimmermann proposes a shift from urban zoos to sanctuary-style habitats and parks that provide animals with more room to roam and more authentic lifestyles. Not only might that lead to happier animals, he says, it could also provide immense value by letting people see animals live in their natural habitats.