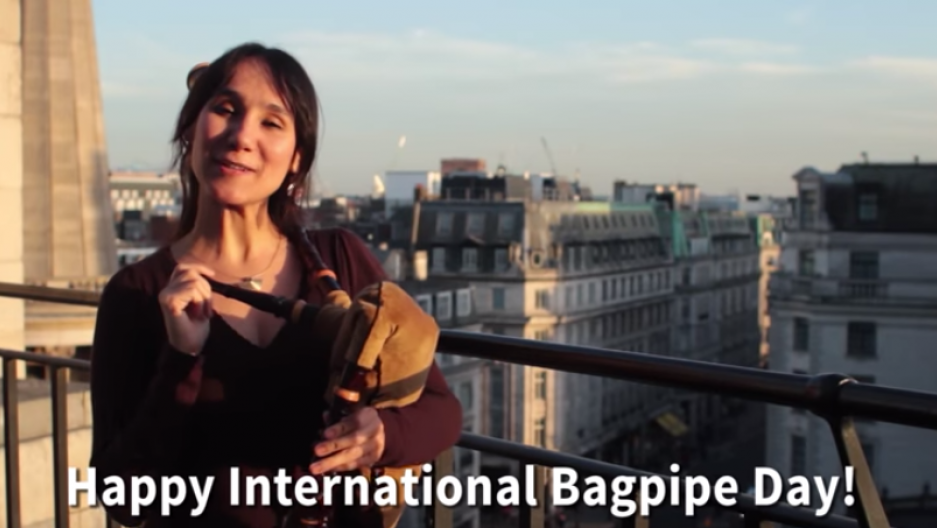 When you think of bagpipes, you probably think of Scotland, right? Maybe Ireland? Think again.

"They're all over Europe, from India to Ireland, to any country you can think of in between: Bulgaria, Belarus, Germany, Sweden, Spain, Italy, Croatia and Turkey — all these countries have local, indigenous bagpipes," says Cassandre Balosso-Bardin, a musicologist from London who also plays Galician bagpipes.

And since March 10 is International Bagpipe Day, she and other pipe enthusiasts are trying to show off that diversity of styles and sounds.

"There's a whole wide world of mysterious bagpipes out there," Balosso-Bardin says.

In Bulgaria, for instance, the bagpipe is a national instrument; the country has a national orchestra that features 100 bagpipes. And in Poland, she says, "you can find bagpipes that sometimes feature carvings of goats' heads in wood on the melodic pipe."

In Galicia, the northern Spanish region that's home to Balosso-Bardin's pipes, "it's [a] very happy instrument and there are a few bagpipe superstars ... Susana Seivane is one, Carlos Núñez is another."

So what's behind International Bagpipe Day, and is it boosting worldwide appreciation of the instrument?

According to Balosso-Bardin, the idea of celebrating the world's diverse bagpipe traditions only got underway five years ago, thanks to the UK's Bagpipe Society. Now there's the holiday, and a biennial international bagpipe conference for scholars and musicologists is scheduled for 2016 at the National Piping Center in Glasgow.

There's surely more to say about bagpipes, but I'd just be droning on.