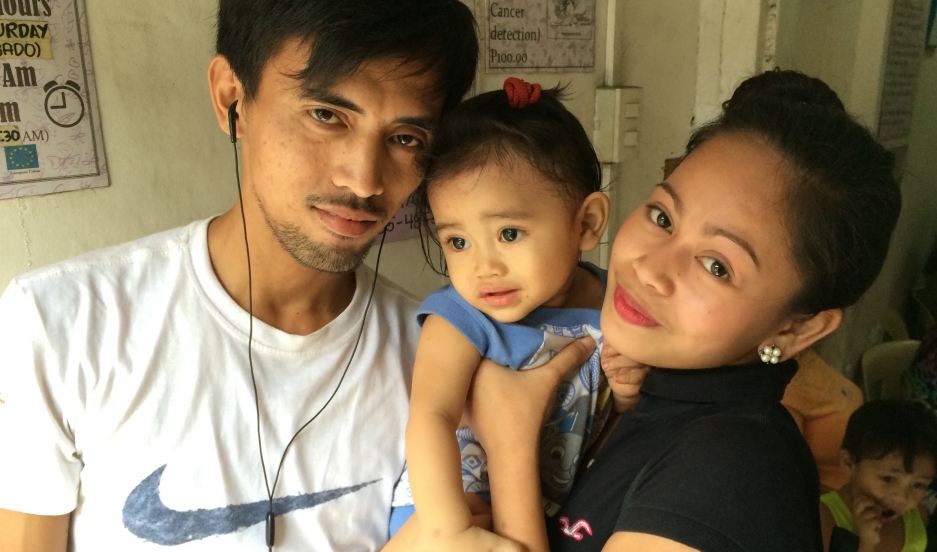 Analesa Paluga with her husband and young son. Paluga says they’ve had two unintended pregnancies, since they didn’t know about contraceptives until they heard about Likhaan.

Along a busy street in the heart of Manila’s largest slum is a hard-to-find doorway. It’s tucked away between a few nondescript shops. But it opens into a hidden world. Women in the Philippines have been coming here for years to get affordable birth control, something frowned upon in this largely conservative Catholic country.

This is the Likhaan Family Clinic, and it’s packed — not just with women these days, but men as well. Twenty-six-year-old Analesa Paluga stands in the small, cramped waiting area with her husband and young son by her side. Paluga says they’ve had two unintended pregnancies, since they didn’t know about contraceptives until they heard about Likhaan.

That’s not surprising, says the founder of Likhaan, Dr. Junice Melgar. When she opened the clinic 20 years ago, “Contraceptive pills were considered almost like contraband that had to be hidden, because if local city officials would see them, [people with contraceptives] would be accosted,” she says.

There was actually a ban on contraceptives in Manila’s public health clinics. A new law recently upheld by the Philippines’ Supreme Court nullified the ban, but while those changes roll out, this clinic is still the go-to place for contraception among the poor here. 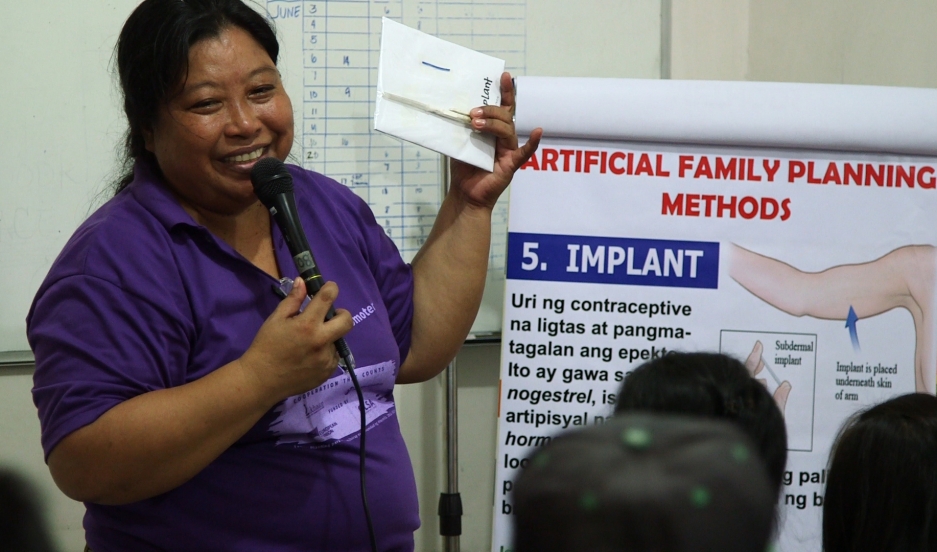 Lina Bacalando addresses folk myths about artificial birth control to a packed room of men and women at a Likhaan clinic.

Melgar didn’t set out to focus on contraception. In medical school, she decided she wanted to work in poor communities, so she began a program to treat women with tuberculosis, malnutrition, and other diseases. But she realized they needed more.

“The number of women who were seeking contraceptives became like 60 percent of our patient load,” she says.

You can look closer at the data and people guiding the work of the Likhaan Center for Family Health in the Philippines, or even volunteer to be part of it, by checking out its resource page.
Go beyond the story

But to do that, in its early days Likhaan had to open family planning clinics in cities surrounding Manila. They then arranged to transport women to those areas. The group distributed free contraceptives, with support from the UN Population Fund (UNFPA) and the European Union.

Likhaan does more than provide contraception—it helps address folk myths about artificial birth control, fears that pills can pile up in the womb, or that interuterine devices can hurt men or make them infertile.

Upstairs from the clinic's entrance, men and women pack a workshop with Lina Bacalando, known around here as “Mama Lina.” Her fun, energetic teaching style makes everyone in the room laugh.

Lina Bacalando teaches a family planning workshop to a packed room of women from the nearby area.

Bacalando passes around an IUD, a T-shaped intrauterine device that can prevent pregnancies for up to seven years. She knows that with the couples here, it’s the men who are more afraid. So, she teaches them how it works.

“I make them hold the device, especially the guys,” Bacalando says. “So I’m able to convince them that it’s actually just plastic, that it’s soft, so you won’t get hurt and that it’s inserted in the womb so you won’t hit it. We’re able to correct some of their misconceptions.” 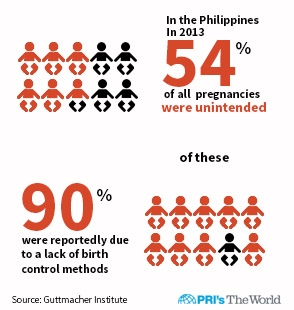 Like many of the women in the room, Bacalando was born and raised in a low-income area, where people don’t have enough money to buy birth control.

Bacalando says her parents came from big families. Her mom was one of 18 siblings. None of them finished high school. So when she got married, she decided she only wanted two children.

“Likhaan taught me that I have rights,” she says. “I learned that I can negotiate with my husband how many kids we should have and what kinds of family planning tools we can use.”

Many reproductive health activists believe the NGO’s work led to a seismic shift in cultural attitudes. It’s certainly obvious when talking with the young women here like Analesa Paluga. As she waits for her number to be called in the exam area, she says she’s here today to get a free birth control implant, in the form of a small plastic rod the size of a matchstick. It releases the hormone progestin, which suppresses ovulation and can prevent pregnancies for up to three years.

Paluga echoes Mama Lina in saying birth control is crucial not just for her, but her family.

“For my kids, what I want is, that no matter what, I’m going to raise them so that they study and they graduate,” she says, “so that the family they have isn’t like the one I grew up in — it’s better.”

Soon, Paluga’s number is called. She’s ushered into a tiny room and lies on a narrow bed. After a shot of anesthesia, the nurse sticks a needle into Paluga’s upper arm and inserts the implant.

Analesa Paluga gets a birth control implant, which will prevent pregnancies for up to three years.

Before the procedure, Paluga looked nervous. But now she has a big smile on her face. She says she hopes her neighbors notice how her life is about to change for the better.

Sonia Narang reported from the Philippines with support from the International Reporting Project.