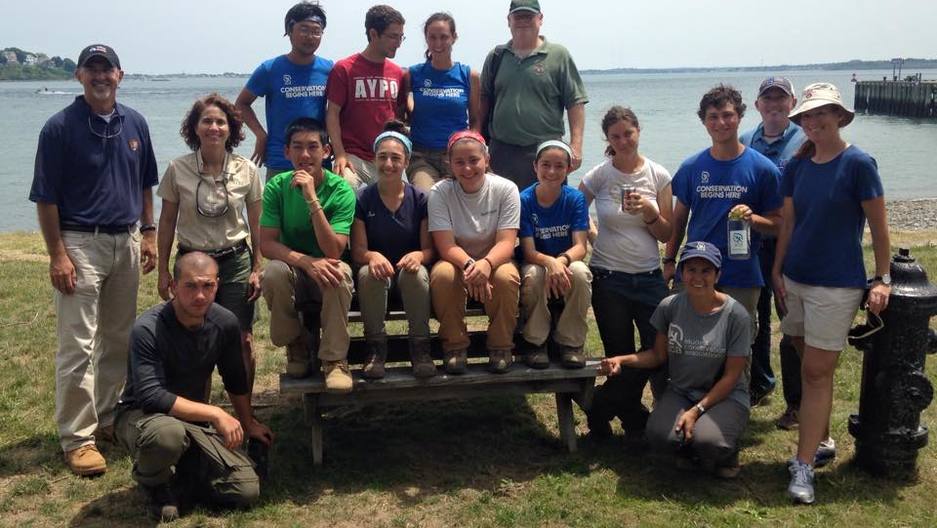 On one Saturday, a dozen or so volunteers clambered off a boat onto Grape Island, one of the small bits of land that dots Boston Harbor.

It’s one of the least developed of the harbor islands, with lush vegetation, hiking trails and campsites. It's also infamously called “Tick Island” by locals, and the park rangers broke out heavy-duty cans of bug spray for the volunteers as they settled in for day of hard work in the cold mud — but also a retreat from the bustle of the city.

They were taking part in Stewardship Saturday, is a year-round program that gives the public an opportunity to care for the islands, which are a national park. The harbor islands are increasingly vulnerable to invasive plant species that displace native flora, so the program ferries volunteers out to pull up the invasive species while young conservationists work with park rangers to restore the natural habitat.

Today, they’re focusing on removing invasive buckthorn to help make room for the desirable native plants. The signature native species on the islands is staghorn sumac. Native Americans, who have been visiting the islands for centuries, used the plant’s fuzzy red berries to make a lemon-flavored tea, and dried its leaves to extend their tobacco.

“Without the staghorn sumac being present, it’s hard to feel and understand the deep history of this place,” says Marc Albert, the program’s director.

A few of the volunteers are here for the first time, but Ray is an old-timer who returns week after week to care of the islands.

“I started about nine years ago volunteering with the National Park Service, doing habitat restoration as we’re doing today," he says. "There’s a few of us who come out here every week and we strongly believe that we are making a difference,” Ray said.

Nancy Faye is another regular. She has lost count of how many times she’s been out on Stewardship Saturday, but remembers what the islands looked like before volunteer restoration efforts began.

“I’ve been coming out here since I was a child," she says. "It was a way to get away from your parents and just go away for the day and do some adventure, because nobody was out here. It was just raw; it was empty. You would never see another person on any of the islands."

Students from the New England Aquarium’s Live Blue Ambassador program are joining the volunteers to conduct a study on habitat restoration.

“I don’t want to be just another person that’s walking on the Earth," says Hereesa, a high-schooler. "I want to make a difference; I want to leave a mark."

The students collect data on the marine life that lives on the ropes that hang off the docks. The invasive species they’re looking for are sessile invertebrates, things like mussels and barnacles, which are anchored to surfaces.

The students pull up the ropes which are covered in slimy sea creatures and compare them to identification charts. The information they gather is passed on to the Massachusetts Office of Coastal Zone Management, and will be used to help protect the harbor’s marine resources.

This story is based on a piece from PRI's Living on Earth with Steve Curwood. Stewardship Saturday excursions take place once a month from November through April, and weekly from May through October. You can sign up on the Boston Harbor Island Park website.