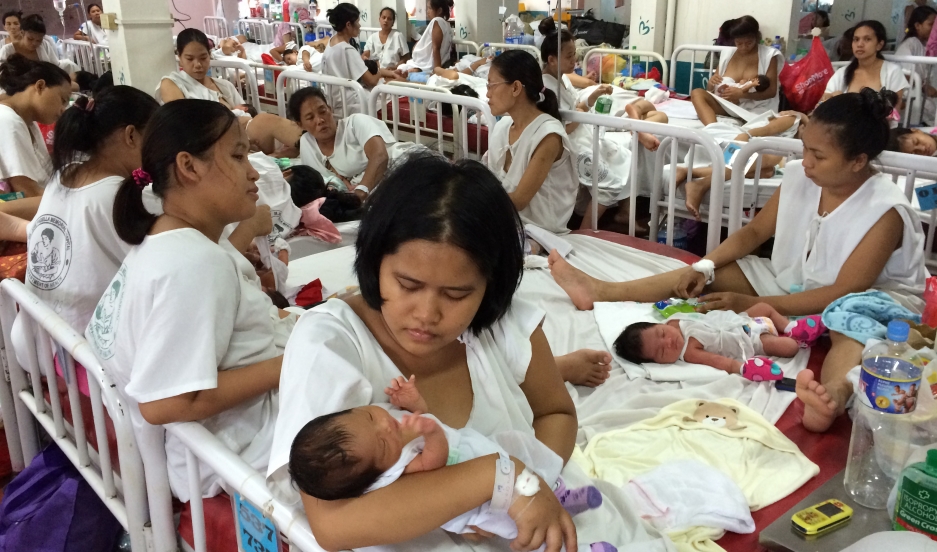 The maternity ward at Fabella Hospital in Manila overflows with hundreds of new moms. There aren’t enough beds for everyone, so they share, four or five to a bed.

The babies, some of them wrapped in blankets, lie in the middle. Young mothers sit in blood-streaked, thin, white hospital gowns that curl up on their sides.

On my first visit to Fabella Hospital, I find out 77 infants already have been born here today. It’s only late afternoon. More mothers and newborns arrive every half hour or so. It’s so busy here that Filipinos commonly refer to this hospital as the “baby factory.”

Inside the maternity ward, no one is getting any sound sleep. “We chose to deal with this type of situation because it’s cheaper here,” says one mom, Jaisel Anne Osmena, 20.

Most of the women who give birth at Fabella come from poor communities around Manila. Here, they only have to pay what they can afford.

“Sharing a bed is fine, it’s okay to share and be all together,” Osmena says. “But it’s tough because what if the person next to you is sick? What if they pass that illness on to you and your baby?”

During the interview, I hear a commotion across the ward. I find out one of the babies has fallen out of a bed. I’m on the other side, so I can’t see what’s happened, but the nurses say everything is okay — at least this time.

“We’re all crowded in the beds, it’s like we’re sardines in a can, tightly packed,” says Carina Dagdagan. She’s 19 years old and just had her second child. Her husband is a barber who makes about $10 a week.

Mothers sit on benches at the front of the ward to breastfeed and calm their newborns.

Fabella Hospital is ground zero of the Philippines’ overpopulation crisis. The nation’s lowest-income families have little or no access to birth control, since it’s not widely available for free. This lack of government-subsidized birth control has kept the country’s fertility rate high.

“Of course, rice,” she answers. “So, how can we make poor women and couples make that choice?” continues Hontiveros, co-author of the Philippines’ Reproductive Health Bill, designed to make contraception free at public health facilities. 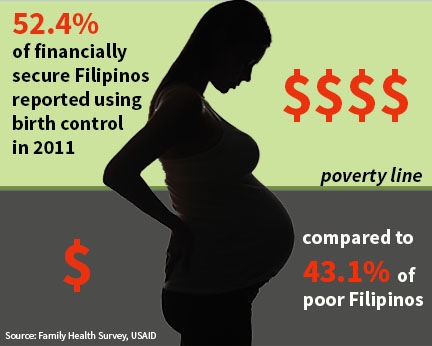 In this predominantly Catholic nation, the bill faced extreme opposition for years. But, in 2014, after more than a decade of heated debate, the Philippines approved the law.

Once the new law is fully implemented, anyone will be able to walk into a public health clinic and access family planning, says Dr. Eric Tayag, a director at the Philippines’ Department of Health.

“Government’s role is to make sure that these services are available to every Filipino women everywhere without any barriers,” Tayag says. “We want women to be healthier, because if women give birth every year, their health status suffers.”

The number of Filipino women who die during pregnancy is so high that the country won’t meet the UN’s Millennium Development Goal for reducing maternal mortality this year. In part, that’s because without birth control, women sometimes turn to illegal, and often dangerous, abortions.

In Fabella Hospital’s post-abortion care unit, women lie alone, quietly in their beds. Maribeth Endoso came here after hemorrhaging during her abortion. She has tears in her eyes as she sits under the glare of fluorescent lights in the room.

What the Pope is saying

The Church has long been a powerhouse in Asia's most Catholic nation, going as far as helping to overthrow Presidents in 1986 and 2001. And despite losing its fight against the Reproductive Health bill, the Pope continues to call for a ban on artificial contraception. See what he told Filipinos in Jan. 2015.
The Philippine Star

“I decided to have my child aborted. I really felt sorry for my child because I had it taken away. I regret what I did,” she says, sobbing softly. Endoso already has three children and says she couldn’t afford to raise another. She went to a local woman who uses stomach massage and misoprostal pills, a drug that can induce abortions.

“It was painful, it was really, really painful,” says Endoso. “Even now, I can still feel the pain. I think it’s because of the multiple massages. After four days, I had chills, fever and I was vomiting.”

Dr. Vanessa Diano, the resident physician on duty, says she would like to see more family planning available to poor women to prevent unsafe abortions.

“If you help them try to control their family size, they won’t get an abortion,” she says. “Primarily, they want to have it because they don’t have money or they can’t afford having another baby."

Newborns nap in Fabella Hospital, a place Filipinos commonly refer to as the “baby factory.”

Upstairs in the maternity ward, visiting hours have begun. The nurses loudly call each woman’s assigned number on a microphone when their family members arrive, and the cacophony spreads across the ward.

Family isn’t allowed into the delivery room or the ward. So this is the first time many men are seeing their wives or girlfriends since the delivery.

The women walk out to meet them in the bustling hallway. There’s not much place for anyone to sit.

Mark Jason Dagdagan, the barber, wraps his arm around his wife Carina in the waiting room. They talk about the birth of their second child.

Fathers line up outside the maternity ward during visiting hours. Hospital rules don't allow men inside the ward, so new moms meet with them in the hallway.

“I really just want two kids because life’s very hard,” he says. “I’m kind of scared about what will happen if there are more of them.”

Despite the cramped conditions here, many patients want to have their babies at Fabella Hospital. That’s because it’s one of the few places in Manila women have been able to get free contraception right after giving birth.

Jenelyn Ranga delivered her third child here. She looks a lot more relaxed than the hospital’s first-timers. She came back for this birth so she could get a free intra-uterine device. The IUD will prevent pregnancies for about seven years.

“To me, it’s important to have contraceptives,” she says. “If we all have too many kids, we won’t have any resources to feed them. What would happen to the children?”

If everything works out, Jenelyn Ranga won’t be coming back to this ''baby factory'' anytime soon.

Sonia Narang reported from the Philippines with support from the International Reporting Project.