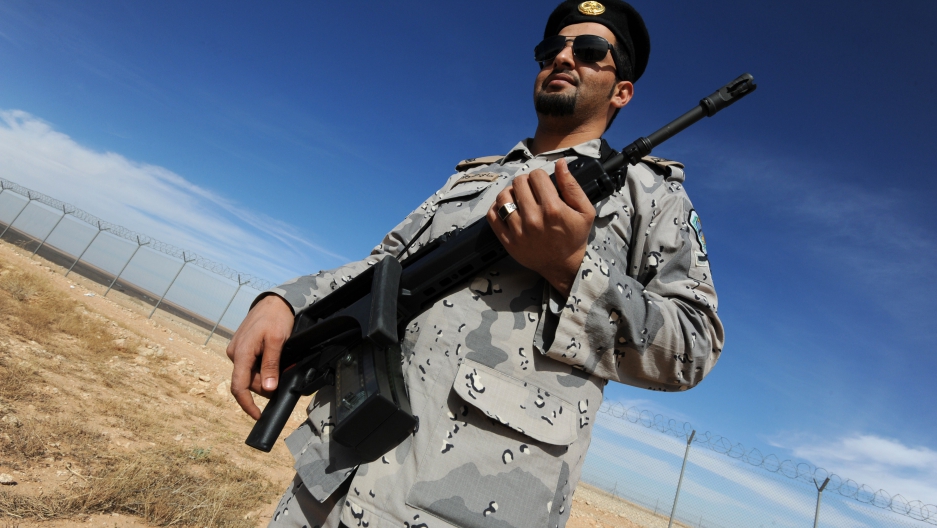 A member of the Saudi border guards forces patrols the fence on Saudi Arabia's northern border with Iraq, near Arar City on February 23, 2015. Saudi Arabia increased its security measures along its frontier with Iraq following attacks launched by the Islamic State (IS) group against Saudi troops and security posts along the border.
Credit: Fayez Nureldine
Share

Editor's note: This story is the first in a continuing series produced by The GroundTruth Project on government responses to the rise of the Islamic State. It is produced with support from the Henry Luce Foundation.

RIYADH, Saudi Arabia — A professor at the religiously conservative Imam Muhammad Ibn Saud Islamic University recently asked a class of about 80 students if they personally knew someone who had joined the Islamic State (IS), the radical jihadi movement now terrorizing the Middle East.

To his surprise, 10 students raised their hands. Under his probing, they each described a similar pattern: For about a month, the friend or relative continued to eat and sleep at home, but “disappeared from his normal life….cut his social connections and became more religious,” recalled the professor, who asked not to be named. Then one day, the person disappeared.

Students related how some young men had sold their cars to pay for their plane ticket from Saudi Arabia to Turkey and then the underground network to spirit them through Turkey into IS-held territory in Syria. While support for IS among Saudi youth is relatively low, it is enough to have officials deeply concerned. One poll last year found that only 5 percent of Saudis sympathize.

But that’s enough to cause big problems.

“There is enough support in the population for Da’esh to make life difficult for the government,” said one middle-aged Saudi who also asked not to be named, referring to the IS by its Arabic acronym.

Young people are drawn to it, he added, “because it does what it says it is going to do” and by declaring an Islamic caliphate, “it is reviving the glory days of Islam.”

And Saudi officials fear that IS’s ideological attraction to Saudi youth will grow if it prolongs its hold over large swaths of territory in Syria and Iraq that it has declared an Islamic caliphate.

“This is the challenge,” said Ministry of Interior spokesman Gen. Mansour Al Turki. “The more these people have time to develop their propaganda, it will increase with time the number of people who will be inspired” to join.

IS, whose brutality has shocked Muslims and non-Muslims alike, has declared Saudi Arabia a prime target and aims to win control of the holy cities of Mecca and Medina. That is very unlikely, analysts say, but the group has made itself felt in the kingdom in recent months, especially since Riyadh joined the international coalition fighting IS.

It has been responsible for several isolated incidents, including shootings of foreigners and the murder of at least seven Shia worshippers in Al Ahsa last November, as well as an attack on a Saudi border post along its northern border with Iraq that left three Saudi guards dead, according to official statements and media reports.

But it has not mounted major, multi-pronged operations like the explosions and hostage-takings organized by al Qaeda in 2003-2006 that killed scores.

“That shows that the government still has this threat under control,” said one Saudi journalist.

“IS is more of a threat than al Qaeda in the Arabian Peninsula [because] it’s better organized, it has established a base and is teaching children to be terrorists,” he said. “They are better trained. I would not be surprised one day to see [IS members] flying an air force jet because they appear to be formed of people with a military background.”

In addition, as many Saudis noted in recent interviews, the Islamic State is more sophisticated than al Qaeda in its social media recruiting efforts. Its videos are slicker and its presence stronger on messaging sites popular with youths like Twitter.

IS’s appearance in the past year has forced the Saudi government to adopt tougher methods against alleged terrorists. A royal decree in February 2014 made it illegal for citizens to join conflicts abroad without official permission, setting a mandatory minimum of three years in prison for violating the order.

Even those IS recruits who return home to Saudi Arabia voluntarily are no longer are given the option of entering the government’s militant rehabilitation program.

“Before the royal decree we used to handle them through the rehabilitation program in coordination with the family,” said Al Turki. “But now they go to jail.”

This change is exacerbating a long-time problem for the government, which is that Saudi prisons are full of political prisoners who may be getting more radical in jail.

Among the 392 people arrested in 2014 for alleged terrorist-linked activities, most were Saudis and many of those were attempting to establish IS support networks in the kingdom, according to Al Turki.

Of those, 97 had previously been through the government’s militant rehabilitation program, he added.

The 2014 royal decree that banned joining jihads outside the kingdom slowed but did not stop the outward flow. Of the 2,275 who have left since 2011, 355 departed after the decree.

An ideological — not a military — threat

Saudi Arabia’s dilemma is that IS’s underlying ideological foundation is the same as that of Wahhabism, the dominant strain of Salafi Islam promoted by the Saudi state. That foundation is a literalist reading of Islam’s scriptures that is intolerant of other faiths, and a desire to live exactly as the earliest Muslims did.

The big difference is that Wahhabism officially preaches obedience to the reigning Islamic ruler, whose permission is required for jihad and ordained corporal punishments. By contrast, Islamic State declares jihad to be an individual duty for every Muslim and it uses extreme violence, including beheadings and mass executions, as an everyday weapon against those who do not follow its strict interpretation of Islam.

“These people are giving the impression that they are creating an Islamic state, which is a trap to delude and recruit young Muslims,” said the spokesman Al Turki.

Young religious Saudis are susceptible to IS’s message that Saudi Arabia, one of the most religiously conservative governments in the world, is un-Islamic because, for example, it allows women on Saudi television and permits females to study overseas on scholarships.

As a result, some Saudis have concluded that confronting the Islamic State’s appeal requires giving religious authorities more leeway and a higher profile. They were therefore happy to see public overtures to the kingdom’s conservative religious establishment made by King Salman, who ascended throne after the Jan. 23 death of King Abdullah.

“There is a general belief that King Abdullah did not succeed to fight the fanatics because he tried by liberal ways,” said Abdullah Al Shammari, a political columnist for Al Youm newspaper. “The only way is to fight them is by religion…by Islam. Now, the danger will be less because King Salman will fight Islamic State by the Quran, by the ulema [religious authorities], by religion.”

Other Saudis are wary of the new king’s approach because they fear that more influence for the ultraconservative religious establishment is not what Saudi needs now for national development, particularly as it relates to women.

Salman also met with Egyptian President Abdel Fatteh al Sisi on Sunday in Riyadh to discuss regional issues, undoubtedly including how to confront IS which has declared some areas of Egypt to be part of its caliphate.

Last year the late King Abdullah chided his clerical establishment for its “laziness” and silence because it was so reticent to condemn IS and its atrocities. There is a tendency among clerical ranks to restrain from criticizing IS because it is seen as promoting majority Sunni interests against those of the minority Shia.

Although Saudi Arabia’s highest religious authority Grand Mufti Sheikh Abdul Aziz Aal Al-Sheikh and other senior clerics have condemned IS, some Saudi religious scholars say the government and its religious allies are not doing enough to counter its message.

Sheikh Adel Al Kalbani, a relatively progressive-minded Wahhabi cleric, said in an interview at his Riyadh mosque that the terrorist group is making the same mistake as some other Salafi Muslims, which is “living the past in the present.”

Islamic State is “implementing the rules of the past or the traditions of the past in the present, while they should implement what the Quran and what the hadith [the collected sayings of Prophet Muhammad] say in the present, taking the original principles and leaving the details,” Kalbani said.

A true Salafi interpretation, he added, “is in the middle, not too strict and not too lenient. It is a middle religion.”

Kalbani said he sees a lot of support for IS on sites like Twitter, though it is not possible to know how much comes from inside the kingdom. But he fears that its attraction will increase among Saudi youth if the clerical authorities do not become more active in the ideological fight against it.

“The problem is with the [clerics],” he said, because they “don’t explain things in detail. They usually talk in generalities. And they need to speak up more frequently especially to explain things to the young people…We should have intensive programs and discussions about Da’esh and discuss with people what is right and wrong.”

Kalbani continued, “Outside people are not the problem; it’s the inside people. When people inside Saudi Arabia are convinced by Da’esh ideas, that will harm Saudi Arabia. If we don’t talk to young people, probably Da’esh is going to be a problem.”

Caryle Murphy is the author of “A Kingdom’s Future: Saudi Arabia Through the Eyes of Its Twentysomethings.” Her recent trip to Saudi Arabia was supported by a grant from the Pulitzer Center on Crisis Reporting.