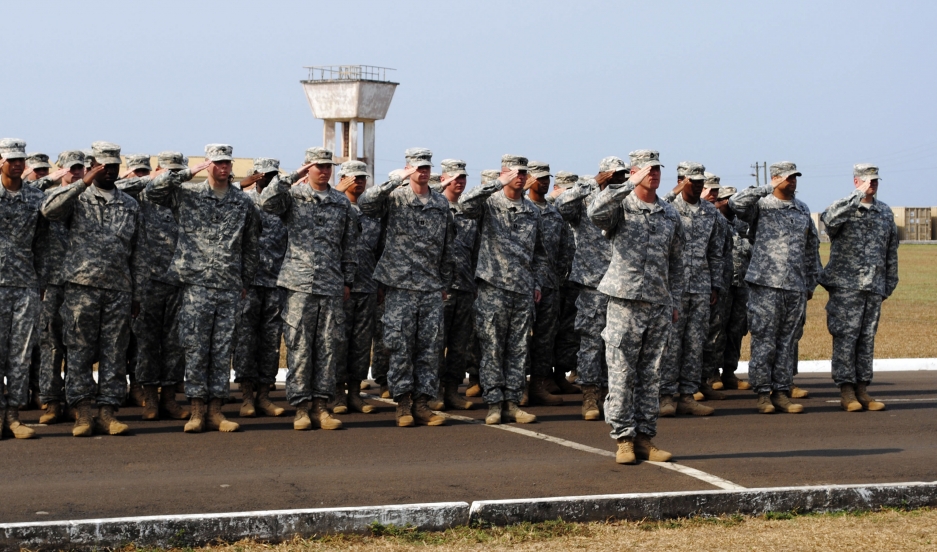 American soldiers take part in a ceremony marking the end of their mission to fight Ebola in Monrovia, Liberia, on February 26, 2015.

The Ebola outbreak in West Africa has killed more than 4,000 people and infected more than twice that number, but the outbreak is finally slowing down.

The World Health Organization found only one new case of Ebola in Liberia during the week of February 22, 2015, and the United States is wrapping up its Ebola mission in the West African country.

“I think calling it a victory would be a little premature, but there’s certainly been a lot of great progress,” says Garrett Ingoglia, the vice president of emergency response at AmeriCares. Ingoglia manages a team of disaster relief and global health workers in Liberia, and traveled to Liberia at the height of the epidemic.

"When I was in Liberia in September, the situation was really dire," he says. "There were reports and projections that there could be 1 million people dying of Ebola by the time it was through. That has not happened, and a lot of the credit goes to the government of Liberia and the government of the US."

Ingolgia says the key to turning the tide on Ebola epidemic was changing the attitudes and behaviors of communities directly affected by the disease.

“If you go to Liberia now, you don’t see people shaking hands and being physically affectionate on the street, which was a big part of the culture before," he says. "People are washing their hands and being very careful about taking precautions.” Burial rituals have also been disturbed in Liberia.

Ingoglia does foresee a return to cultural normalcy in the future. “I don’t think that the way people are behaving now is truly sustainable,” he says. “You’re not going to have a situation where nobody hugs or shakes hands in the street. I think those things will change, but I think that there’s going to be a heightened awareness of the threat of this kind of disease."

Of course, larger changes are needed as well. "The health systems itself in these countries has got to improve," Ingoglia says.

Before the disease took hold, many of the Ebola-stricken nations in West Africa had weak medical infrastructure, which contributed to the spread of the virus. As nations like Liberia recover, he says, they must invest to make sure healthcare workers are well-equipped to deal with threats in the future.

In the meantime, Liberians have at least gotten the message about the deadly outbreak.

“In Monrovia, where there were the majority of cases [in Liberia], there are now signs everywhere and lots of attention placed on infection prevention and control,” Ingoglia says. “You can’t walk 10 feet without seeing a billboard or sign warning of the dangers of the disease. ... You’d be surprised at how widely the message has been spread.”