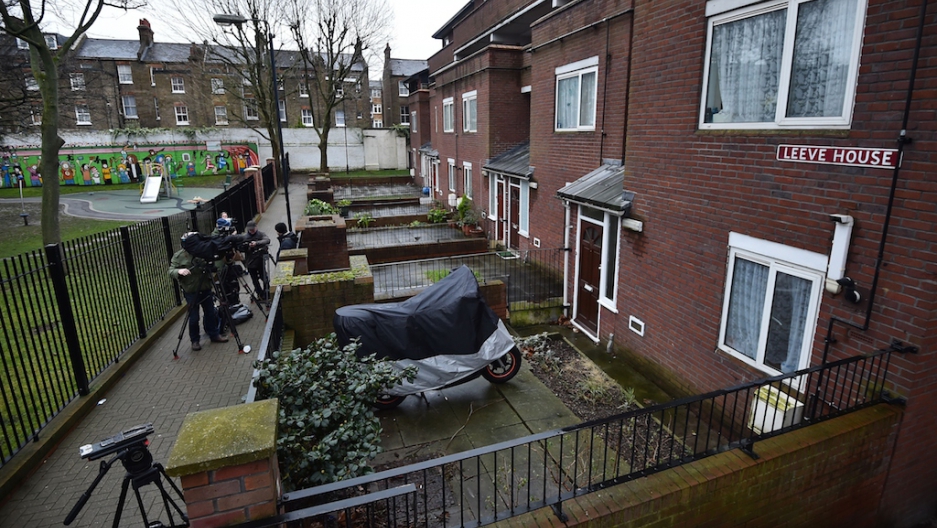 Journalists gather outside a London residence where computer programmer Mohammed Emwazi, identified as the masked Islamic State militant in beheading videos, is once believed to have lived.
Credit: Ben Stansall
Share

LONDON, UK — Only one person who knew him has spoken publicly about Mohammed Emwazi since the 26-year-old computer science grad was outed as the black-masked man in the Islamic State’s ugliest propaganda videos.

On Thursday, Asim Qureshi, the research director of a rights group that worked with Emwazi before he disappeared into Syria in 2012, remembers a man who brought “posh baklava” — expensive pastries — into the office as a thank-you treat.

“You may be surprised to know that the Mohammed I knew was extremely kind, extremely gentle, soft-spoken,” Qureshi said. “The person I met would never have hurt a single person.”

Since Thursday’s publication of a Washington Post article naming Emwazi, other media have cited unnamed US officials confirming he is the suspect widely called “Jihadi John” — the knife-wielding man who delivers angry monologues against the West in a British accent in videos showing the beheadings of civilian hostages, sometimes at his own hands.

More from GlobalPost: For richer, for poorer: Jihadi John is a reminder that extremism comes in all shapes and sizes

Officials and commentators have speculated about the identity of Jihadi John since the first video of Foley’s death surfaced in August. His accent seemed to indicate that he was a Londoner. Media have reported for months that US and UK officials knew his identity but were not disclosing it to the public.

Hundreds of Brits have left to fight in Syria, where Islamic State (IS) militants are among the insurgents battling President Bashar al-Assad’s forces. Many of the recruits have publicly reported joining IS — through jubilant social media posts.

The extreme violence and cruelty of Emwazi’s alleged public actions — and his encounters with UK security before he went to Syria — give an urgent note to the efforts to understand who he is and where he came from.

Feeling alienated from one’s government is one thing. Being willing to murder those who carry its passport is another.

For a 20-something member of one of the world’s most media-savvy terror groups, Emwazi has left a very scant trail on social media. No photographs or posts of his have yet emerged.

He was born in 1988 in Kuwait but immigrated to the UK with his family at age 6, according to details in the Washington Post. He lived in Ladbroke Grove, a gentrifying west London neighborhood where it’s easier to find a soy latte than a mosque.

The Post describes him as a young man from a well-to-do family, who liked stylish clothes. His father drove a taxi, Qureshi said.

His family has not spoken publicly. Qureshi said the parents are not convinced that the man in the videos is their son.

Qureshi disputed the characterization of himself in the Washington Post story as having definitively identified the man in the video as Emwazi.

There are similarities, he said, but “I can’t be certain. He’s got a hood on.”

Emwazi studied computer science at the University of Westminster in central London, which confirmed that he left the school in 2009.

University of Westminster, alma mater of Mohammed Emwazi, identified as Jihadi John. Just now, a man walked in off the street and shouted "I hate you Muslims" at a group of female students in hijab in the lobby. Banged on the windows after he was ordered out. Women scared to leave now. #globalpost

On Thursday evening, a man stumbled in off of busy Regent Street and into the school’s glass-fronted lobby.

“I hate you Muslims!” he shouted at a group of hijab-clad female students who were sitting by the front door.

He said a few more slurs before a security guard asked him to leave. He banged on the window as he left.

“I’m shaking,” one of the women said, and it was clear she was. The man lingered out front for a while. The women said they were scared to leave.

The university has drawn criticism in the past as a result of some students’ support of Hizb ut-Tahrir, a banned Islamist political group that has called for an end to democracy and formation of an Islamic caliphate.

Two students with ties to the group were elected to Westminster’s student union government in 2011. Former President Tarik Mahri did not respond to requests for comment on Thursday.

“Jihadi John was radicalized AFTER graduating. And I have never met the guy,” former Vice President Jamal Achchi told a journalist on Twitter. “If you’re looking for the causes of his radicalization, perhaps you ought to scrutinize foreign policy and the role of the MI5,” he said, referring to Britain’s spy agency.

That was also the conclusion of Cage, the advocacy group where Qureshi works, which focuses on Muslims affected by the war on terror.

Emwazi approached the group after being stopped by British security forces on a post-graduation trip to Tanzania in May 2009. He said he and two friends were detained and questioned before being sent back to the UK.

Emwazi was harassed repeatedly by UK security forces over the next two and a half years, Qureshi said, and barred from several attempts to emigrate to Kuwait. He last communicated with Cage in January 2012, after which he went to Syria, Qureshi said.

Correction: An earlier version of this story neglected to note the name of one IS hostage, aid worker Abdul-Rahman (Peter) Kassig.