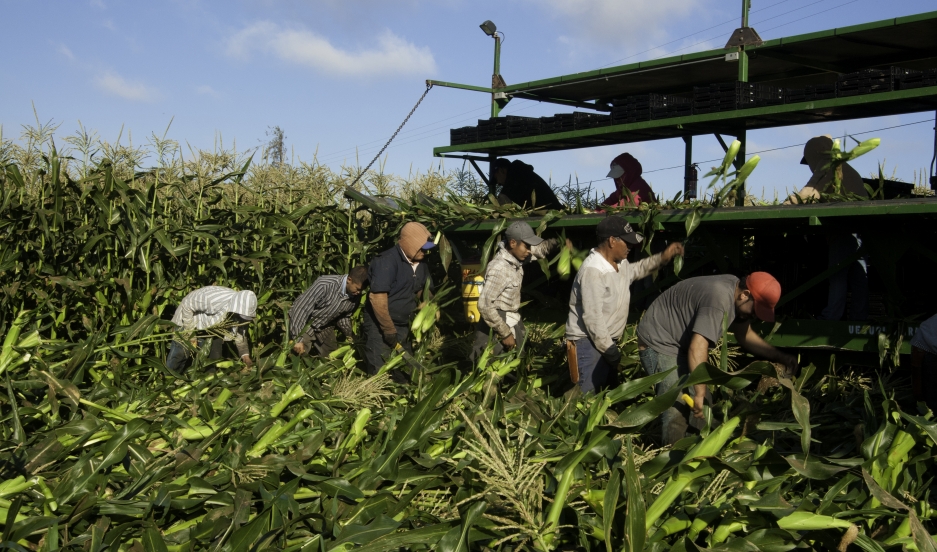 Harvesting corn on Uesugi Farms in Gilroy, California, in August 2013.

When I was 10 years old, I began working regularly with my family as a migrant farmworker. I'd done it previously, but only on Saturdays, to help them catch up when tornado warnings ended work early or when the patches of weeds were particularly thick. The summer of my fourth grade year, it became my full-time job.

In the third grade, when this photo was taken, Miguel Morales was working in the fields in Texas only on Saturdays. By the summer and into the 4th grade, he began working full time with his parents and three older sisters.

I'm thankful we never had to do the back-breaking work of picking fruits or vegetables, though my best friend worked the orchards of Southern California as a teenager. He still has problems with his hands to this day. He doesn't think it's related to his farmwork, but I know better.

The Texas fields of corn and soybean my family worked required weeding with garden hoes and machetes. The biggest danger of the work didn't come from these sharpened blades, although once I wasn't paying attention and ended up with the rusted blue machete embedded in my shin. Nor was it the suffocating Texas heat that required us to protect our skin by wearing longsleeve shirts and hats in more than 100-degree weather. It wasn't the startled snakes, spiders and mice we'd come across walking the rows. No, it was the pesticides. I still remember their metallic taste and coughing my throat raw after a crop duster would fly over us and spray. Sometimes I didn't know if it was sweat or pesticide residue that made my eyes burn.

Yes, there are many dangers for children and adults who work the fields. As the story of another farmworker points out, farm work still follows us even when we leave the fields. Often, the people working the fields cannot afford to buy the food they tend.

I'm not going to say that I whisper a prayer with each apple I put in my grocery cart, but often I think about the hands that weeded, picked and packed the fruit and veggies that I eat. I look at the colorful shapes and I calculate the difficulty of tending and picking certain fruits over others. Sometimes the stickers will note from which state the fruits came. My mind immediately forecasts the temperature there. Do they have to bundle up to keep the hot sun off their backs or do they have to wear extra socks to keep their toes from the cold? What tools do they use? Bladed scissors and knives? Their hands? Do they carry the produce in buckets or bags slung across their bodies? 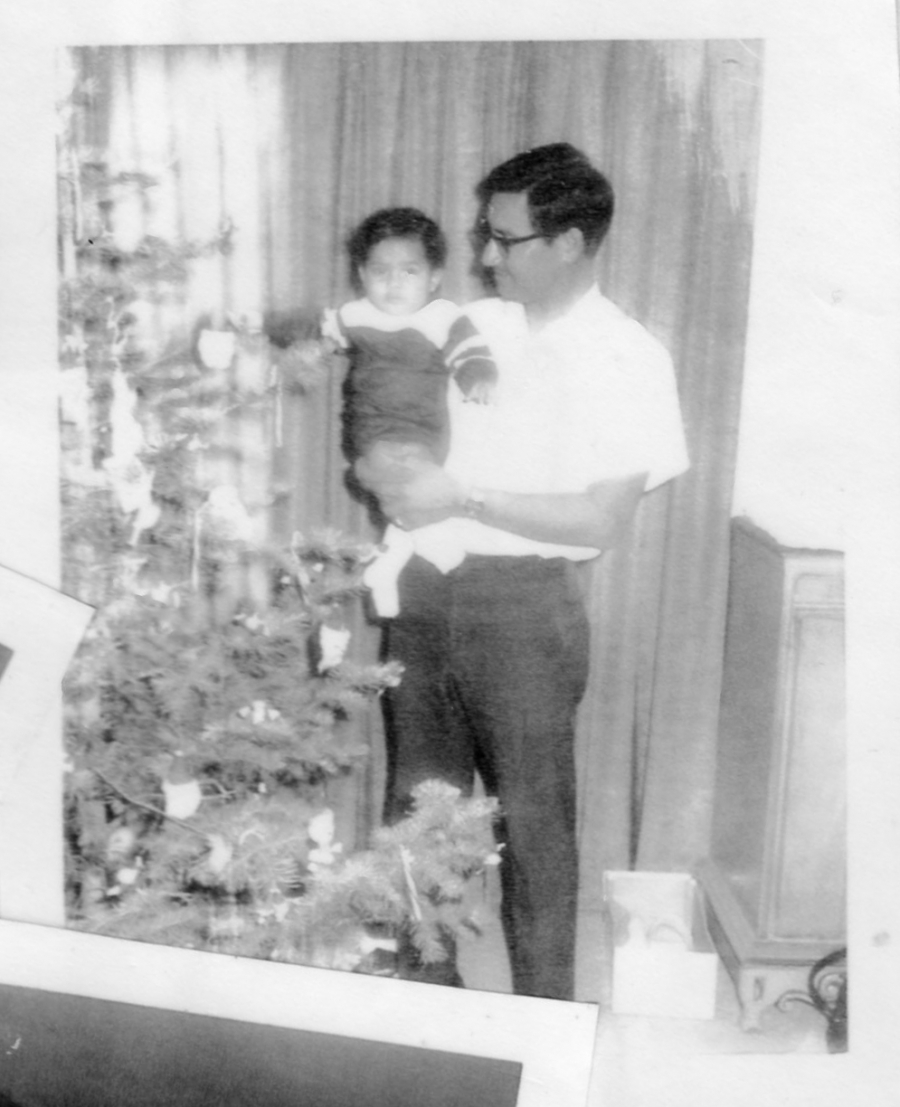 Miguel Morales and his father around 1970. Soon after Miguel began working in the fields, his dad got a job in a meat packing plant.

At the meat cases, I routinely think about the women and men who work in cold meatpacking plants. They surely cannot afford the meat they process because I certainly can't. I remember my father who worked in such a plant and came home with blood on his clothes because it had seeped through his smock. I imagine other fathers and uncles on the assembly lines as fresh carcasses move through the plant. Each of them slicing, cutting, chopping and packing marbled meat until it reaches the glass cases at my store. Their blades can, and probably do, just as easily slice meat off their own bones.

Sometimes I have to push those thoughts and images from my mind because people aren't supposed to contemplate how their food came to the grocery store and, honestly, sometimes I just need to get out of there.

It's when I'm at home cooking that I allow my mind to consider the food before me. As I slice onions, cilantro, red and green peppers, as I smash and chop garlic cloves, I thank the hands that brought me this food and I hope they are well. Of course, there are times when food sits in my refrigerator too long and I have to throw out wilting wet spinach or shriveled, rubbery carrots. It's frustrating not just because it's wasted money but because, instead of eating a salad, I ordered a pizza. It's also disrespectful to those who put their bodies and their beings at risk in order to bring that food to market. I'm literally throwing their efforts in the trash.

How the produce aisle looks to a migrant farmworker

What's it like to be a migrant farmworker? One anthropologist lived and worked alongside them.

Don't get me wrong, I don't have deep thoughts about my food each and every time I walk into the store. It's only since I've started leading a writers workshops for migrant youth in Kansas and Missouri that I've been forced to remember the farmwork that I spent a lifetime trying to push away. They make me want to write and tell our stories. Their faces make me more mindful about my food, the food they and their families help put on my table.

Because I also had a short stint working in a grocery store, I try to say hello to the produce workers who sort and stack the fruit — usually they're Latinos. (I'm of Mexican and Puerto Rican heritage.) Sometimes it's just a head nod, sometimes they help me pick out the best veggies. Most of the time, it's just me wanting to acknowledge them as fellow farmworkers because, well, they are.

Miguel, now 47, works at the library at Johnson County Community College in Overland Park, Kansas. A version of this essay originally appeared on his blog, The Last Year.