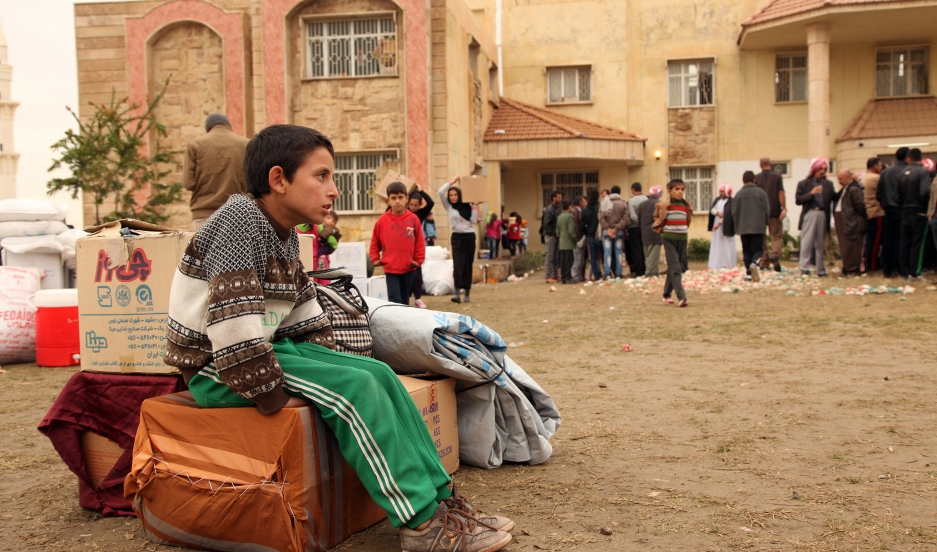 A displaced boy, who fled Islamic State violence in Mosul, sits in a school in Dohuk province, December 1, 2014.

For a typical resident of the city of Raqqa, Syria, everyday life is a series of hardships, small and large. Living in the self-declared Islamic State, basic utilities have ceased to function, and both businesses and ordinary citizens are suffering.

“Electricity is down to maybe an hour a day, or perhaps less. Water quality is deteriorating. People are living under severe repression,” says Torbjorn Soltvedt, principal analyst for Middle East and North Africa at the risk analysis group Verisk Maplecroft.

What is it like to live under ISIS? Soltvedt paints a grim picture of a ragtag group of fighters whose social ambitions have crumbled under international pressure, making life a nightmare for citizens and business owners.

“In Raqqa, we’ve seen the Islamic State enforce religious seminars for pharmacists — they have to attend in order to be allowed to carry on operating their businesses,” he says. “It’s really an extreme interpretation of Islamic law and an extreme enforcement of it. It reaches every single aspect of people’s everyday lives.”

The terrorist group initially took on a variety of governing responsibilities, and citizens were even provided with bread and fuel at reduced prices. However, as the months passed, ISIS has started to struggle with its role as governing body, Soltvedt adds.

In recent months, international military action — especially airstrikes from coalition countries such as Egypt, Jordan, the United Arab Emirates and the United States — has degraded municipal infrastructure in ISIS territory, turning the fighters on their citizens.

In Mosul, Iraq, ISIS “imposed taxes on local people. Businesses that are allowed to operate have to pay a tax. Trucks and cars coming in have to pay a tax. Religious minorities, Christians for instance, have to pay a tax. Even seizing bank accounts” became a favored tactic in this city of more than a million people, according to Soltvedt. ISIS also forces businesses to stay open so services are not shut off.

Soltvedt claims that ISIS' degraded position stems from its failure to learn two key historical lessons. The first is that of the Ottoman Empire, whose late medieval Sunni caliphate would tap into the regional cultures and social systems. ISIS, on the other hand, razes everything to the ground, and is attempting to build a new society from scratch.

“They call themselves a state, an ‘Islamic State,’ but it bears very little resemblance to the historic caliphate, or even any modern state,” says Soltvedt. “There’s very little in the way of incorporating existing structures. It’s bringing in foreign fighters. In Syria, there might be Tunisians or Iraqis that are running businesses and overseeing the production of oil.”

The militant group’s second failure was forgetting how the military destabilization of civil government in Iraq and Syria enabled their rise in the first place.

“When you look at the Islamic State’s ability to rapidly seize territory in Iraq, a lot of that was done due to the Iraqi government’s marginalization of the Sunni community,” Soltvedt explains. “Now, the Islamic State runs the same risk as in the mid-2000s, when the US troop surged alongside the Sunni tribal movement and was able to more or less defeat or push back these types of groups.”

He continues: “If you look back at al-Qaeda in Iraq, it was more or less defeated until the conflict in Syria emerged. The Islamic State in Iraq was able to evolve into what is today the Islamic State. But they don’t seem to have learned many of those lessons, which led to [al-Qaeda’s] initial downfall in Iraq.”

Citing the recent spate of foreign fighters returning from IS territory, Soltvedt says morale has dropped as the group has lost mobility.

“Initially, when they had a lot of momentum, they were moving around in large convoys, almost a sort of Blitzkrieg without the air support, quickly seizing territory,” he says. “They’ve lost that momentum now, and they’re struggling to govern these cities. It’s become an occupation force.”

Soltveldt continues: “People turn up from European countries to join the Islamic State. ... They see the severe repression and brutality, and also the lack of momentum at the moment, and that’s had a very negative impact on the group’s morale.”

But despite the brutal realities of life under ISIS control, Soltvedt says that most citizens won’t leave their homes.