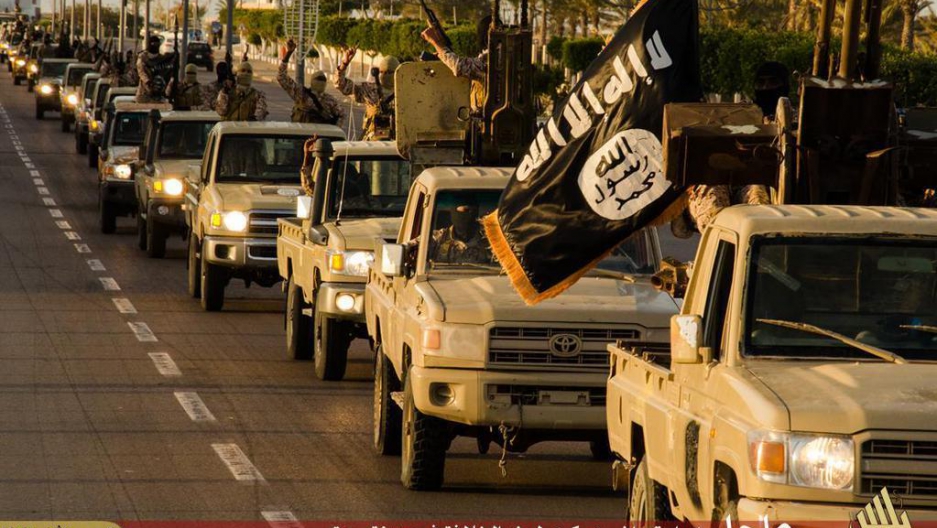 Islamic State fighters parade through the Libyan city of Sirte in February.
Share

The images are clearly aimed as a show of force — an announcement that the Islamic State (IS) is now a power in Libya. Their release came one day after a similar attention-grabbing move: a mass beheading of 20 Egyptians near Sirte.

The IS faction in Libya has since been blamed for oil field bombings, targeting a prime source of state revenue. On March 9 Austria's foreign ministry claimed nine missing foreign nationals had been kidnapped by the group during an assault on an oil field in al-Ghani the week before.

But just how powerful is the Islamic State’s Libyan franchise?

IS operatives are believed to have arrived in Libya as early as last summer — around the same time the group’s fighters overran a large part of northern Iraq in a sweeping offensive, a security official told the Wall Street Journal.

Adopting a different approach than it had in Syria and Iraq, where it fought against other Islamist groups, it chose to reach out to Libyan militants, including members of Al Qaeda, widely seen as its rival.

Since the beginning of the year, IS has launched increasingly high-profile attacks, beginning with an assault on Tripoli’s Corinthian Hotel that left nine dead, including an American contractor. In early February gunmen professing loyalty to the group attacked a French-Libyan oil field, killing nine guards.

IS took control of the eastern city of Derna late last year and took power of significant parts of Sirte in early 2015. The 20 Egyptians killed by IS earlier this week were abducted in December and January from Sirte, the hometown of longtime strongman Muammar Gaddafi, who was ousted in 2011.

Islamic State fighters parade through the Libyan city of Sirte.

Yet despite the high profile attacks, the IS reach in Libya is unclear. Residents report that the group is administering Derna much as it has cities in Iraq and Syria: levying taxes and setting up police and court systems.

Reports from Sirte suggest that it is rapidly following suit.

“We have seen pictures of [IS morality police] telling people who sell perfumes not to sell it anymore, taking mannequins out of shop windows and telling hairdressers to shut down,” says Mohamed Eljarh, non-resident fellow with the Rafik Hariri Center based in the Libyan city of Tobruk.

El-Jarh adds that there have been reports of members of the Interior Ministry repenting to IS.

According to Libyan Minister Omar al-Sinki, there are nearly 400 Tunisian and Yemeni militants in Sirte and IS had established its headquarters in the city’s main convention center, the Associated Press reported.

The homegrown extremist group Ansar al-Shariah, which preceded IS in both Derna and Sirte, has seen many of its members join up with IS.

As in other areas under its control, the Islamic State has named an “Emir of Tripoli” — a Tunisian known as Abu Talha, to run the group’s operations in western Libya. Abu al-Baraa el-Azdi, a Yemeni based in Derna, reportedly sent by IS leadership in Mosul, is said to lead in the east.

Islamic State fighters parade through the Libyan city of Sirte.

Meanwhile, Libya’s elected government, which has fled to the eastern city of Tobruk, has no control over the country’s resources or population centers. Since last summer when the Islamist-led General National Council refused to accept the results of national elections, Libya has had two rival governments.

The GNC is based in Tripoli and is backed by the militant group Libya Dawn, made up of Misratan and Islamist fighters. Opposing them in the east, a rogue secular general named Khalifa Haftar commands a force known as "Operation Dignity," which has also been fighting Ansar al-Shariah and other Islamists.

There are signs that the Islamic State may struggle to win widespread support in areas where it is trying to gain influence. Many in Misrata — a stronghold of Libya Dawn support — are wary of the IS takeover in neighboring Sirte, and have called for an end to the conflict and the need for a political solution.

“Within Misrata there are voices that are increasingly saying we should end the war against each other,” says Eljarh, “Misrata is under threat from IS."

The ongoing chaos provides fertile ground for the Islamic State to expand its Libyan outposts.