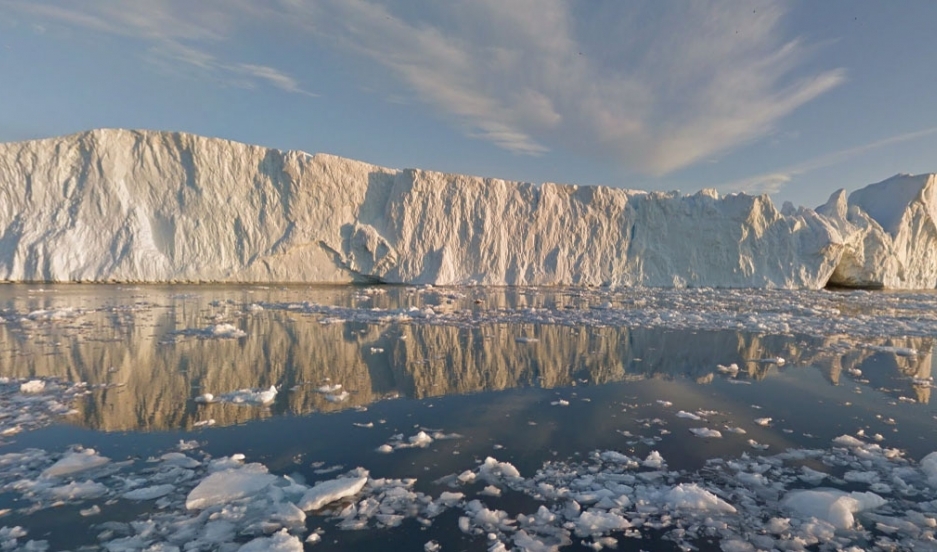 The Ilulissat icefjord, a UNESCO World Heritage site, is a stunning ice wall that seems to defy gravity as it reaches up into the clear, blue sky.

Show of hands: How many of you out there have travelled or plan to travel to Greenland?

It's a bit off the beaten path, isn't it? But now you can get up close and personal with Greenland's glaciers, fjords and ancient Viking ruins with Google's Street View technology — despite the seemingly small number of streets on offer.

Among them is the Illulissat Icefjord, located 155 miles north of the Arctic Circle. “We didn't use any zoom lenses," explains Eva Mätzler, who works for Asiaq in the capital city of Nuuk. "We approached by boat, sailing around during the midnight sun with some very keen captains from the area — and at Jacobshavn Glacier we landed right on top of the glacier with a helicopter."

Another one of the sites captured by Google Street View camera is Brattahild, the estate of Erik the Red at the time he founded an early Scandinavian colony in southern Greenland in the 10th century. Tourists visit to see a recreation of Brattahlid's church, said to be the earliest church in the New World.

These Street View maps and images will offer many people their first — and maybe only — up-close-and-personal glimpse of Greenland. Mätzler says she hopes people “will see what Greenland looks like today, how people live today, and how beautiful and variable its natural landscape is.”

She points out that Nuuk may not be that different from many cities of the world, but the project also offers views of “small settlements where people are living from hunting, fishing or working sheep farms. And these are very distinctive places in the world.”

“Greenland is chock full of glorious natural wonders and historical sites,” says Alex Starns, the Google Steet View technical program manager on the project. “Like the Norseman of old, you can embark on a journey through Greenland, the world's largest island."

Besides the inspiration that floating ice and rugged Arctic landscapes afford, Mätzler says she hopes “we can show people the beauty of Greenland and make people curious enough to come here to see it for themselves.”