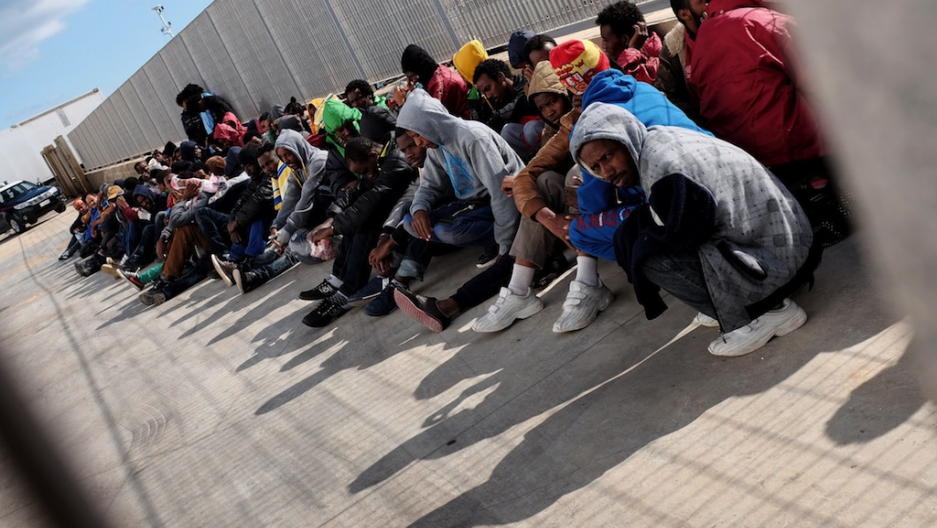 Migrants wait in the port of Lampedusa to board a ferry and be transferred in Porto Empedocle in Sicily, on Feb. 18, 2015.
Credit: ALBERTO PIZZOLI
Share

LONDON, UK — A few months ago, before Islamic State (IS) militants beheaded 21 Egyptian Copts on a Libyan beach, a blogger sympathetic to the group saw an opportunity for fighters to infiltrate Europe via the Mediterranean Sea.

The blogger, who goes by the name Abu Arhim al-Libim, wrote a post on JustPaste.it encouraging militants to pose as migrants on boats, according to an extremism researcher in London who discovered the piece.

"If this was even partially exploited and developed strategically, pandemonium could be wrought in the southern European states,” al-Libim wrote.

“It is even possible that there could be a closure of shipping lines and targeting of Crusader ships and tankers."

It’s the type of recruitment appeal that's regularly circulated among IS supporters. But the fact that the group has made inroads in Libya since the post went up has made analysts take note.

“It’s a country that’s awash with instability, and within those kinds of circumstances it can provide fertile ground for jihadist groups,” said Charlie Winter, a researcher with the Quilliam Foundation, a London think tank.

The prospect that violent extremists could be crowding in the boats alongside innocent civilians fleeing conflicts can only make life harder for migrants often already living a refugee nightmare.

The civil war in Syria and adjacent conflicts in the Middle East and northern Africa have displaced more people than any event since World War II. In Syria alone, about 9 million people have left their homes since war there started almost four years ago.

Record numbers of people are attempting to flee by crossing the Mediterranean. More than 170,000 arrived by boat in Italy from departure points in Libya and Turkey last year, four times more than in 2013, according to Italian government figures.

More than 3,000 died or went missing during the crossing, a fivefold increase from the year before, the aid agency Save the Children said.

More from GlobalPost: Cheering for the Islamic State on Facebook can get you jailed in the UK

Arrivals in the first five weeks of this year were up 60 percent over last year. The first landing point for most is either Sicily or Lampedusa, a tiny Italian island 109 miles off Sicily’s coast that is the southernmost European territory in the Mediterranean.

Over two days in February alone, 1,200 people arrived in Lampedusa, said Giovanna Di Benedetto, a Save the Children spokeswoman based there. More than 200 of them were children, most of whom were traveling alone.

Tens of migrants in #lampedusa prepare to board a ferry out of the island. Many others expected to be flown out on military planes.

Many make the crossing in trips organized by human traffickers. The most appalling abuses have made international headlines, like the ship abandoned by its crew that capsized in 2013 and killed more than 300 migrant passengers. A trafficker rescued in the wreck was later sentenced to 30 years in prison for raping women who’d paid him to take them across Libya.

In February, smugglers threatened an Italian coast guard rescue mission with AK-47s to ensure their boat was returned undamaged (nevermind the human occupants).

The prospect of IS boasting openly about using migrants as cover raises alarm bells in many different camps.

Migrants in #lampedusa talk about their life-threatening journey from Libya. They say reception centre on the island is not big enough for them

The deepening crisis in Libya, whose officially recognized government was ousted from the capital in August by an armed militia called Libya Dawn, is alarming officials who fear the consequences of IS exploiting the country's instability and porous borders.

Libya’s internal security has collapsed since the fall of Col. Muammar Gaddafi in 2011.

It was in Libya where IS-aligned cells recently beheaded 21 Egyptian Christian migrant workers, a gruesome act depicted in a propaganda video released Sunday. In return, Egypt launched a bombing campaign targeting IS locations in Libya.

"Those boat people who go for immigration purposes and try to cross the Mediterranean ... in the next few weeks, if we do not act together, they will be boats full of terrorists also," Egypt's UK Ambassador Nasser Kamel told the BBC.

It also concerns those tasked with resettling refugees in Europe. There were almost 135,000 asylum applications from Syrians to European countries last year, according to the UN High Commissioner for Refugees. European countries have offered to resettle only about 30,000 people so far.

More from GlobalPost: 2015 is on pace to break the record for migrant deaths in the Mediterranean

The UNHCR has not received any evidence of IS fighters posing as migrants, said Babar Baloch, a UNHCR spokesman.

“The most important thing is that Europe should not try to close the door to those people who are fleeing to its shores in need of international protection,” Baloch said. “You can’t deter someone who is in running in fear for their life because they will only be pushed into more and more desperate situations.”