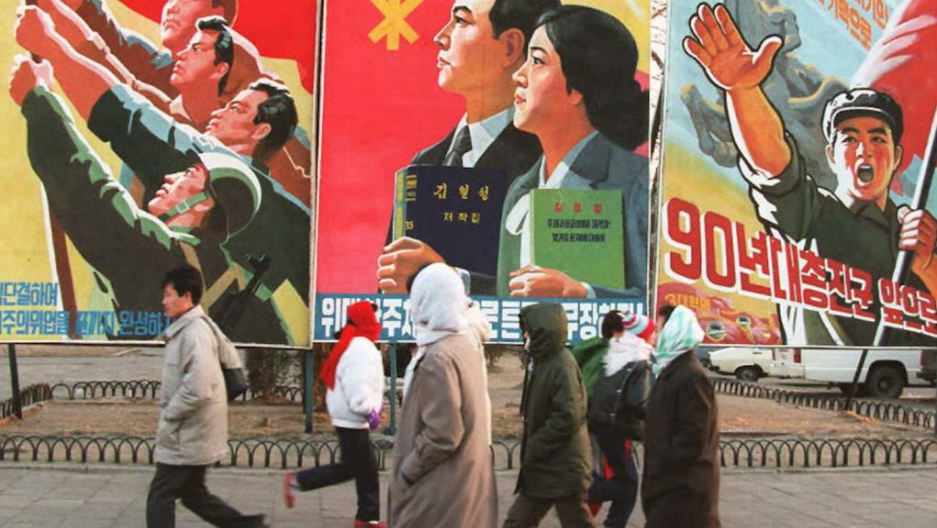 These banners and billboards have long carried an unending assortment of taglines, including these stalwarts:

- "The North Korean people must bind together and build up the glorious nation at breakneck speed";

- "Maintain vigilance against the ever-looming threat of an American invasion";

- "Let us praise the sacrifices of the farmers and laborers, who have worked tirelessly to enact the vision of Marshal Kim Jong Un and his family dynasty."

Hackneyed and stilted though this propaganda may be, it is key to the regime’s attempt at total control.

This year, the 70th anniversary of the Korean peninsula’s liberation from Japanese World War II era rule, the Kim Jong Un regime has been hard at work revitalizing its sloganeering, rewarding its citizens with 349 fresh political mottos to ponder.

But the latest list is worth a read to get a sense of the mind-numbing fodder that leader Kim Jong Un’s 25 million subjects are meant to get charged up about. Here are GlobalPost’s favorites, pulled from North Korean state media and sourced via independent aggregator KCNAWatch:

"Make fruits cascade down and their sweet aroma fill the air on the sea of apple trees at the foot of Chol Pass!"

"Let us turn ours into a country of mushrooms by making mushroom cultivation scientific, intensive and industrialized!"

"Let us carry through the great Generalissimos' instructions on grass for meat!'"

"Thoroughly get rid of abuse of authority and bureaucratism!"

"Let us all turn out in the general offensive to hasten final victory in the revolutionary spirit of Paektu!" [Editor’s note: Mount Paektu is the mythical birthplace of the Korean race and figures prominently in North Korean propaganda.]

"The great Comrades Kim Il Sung and Kim Jong Il are the eternal leaders of our revolution, the sun of Juche and the incarnation of the dignified powerful Mount Paektu nation."

"Let us advance vigorously united firmly with one mind and one will as befit the descendants of Comrade Kim Il Sung and the soldiers and followers of Comrade Kim Jong Il!"

"Long live the great victory in the war against Japan!"

"Let us hasten final victory through a revolutionary ideological offensive!"

"Fire an opening salvo of an ideological campaign and make our fire concentrated, regular and accurate!"

"Should the enemy dare to invade our country, annihilate them to the last man so that none of them will survive to sign the instrument of surrender!"

"Let us turn the whole country into a socialist fairyland by modelling it on Pyongyang, capital of the revolution!"

"Make larger numbers of ideological 'missiles' capable of severely damaging the enemy and instilling firm confidence in victory among our service personnel and people!"

"Kindle the flames of a fresh revolution in cinema, starting from the production of animations!"

"When young people are astir, the whole country becomes astir and a revolutionary upsurge is brought about on all fronts of building a thriving socialist country."

"Towards the trench on the first line of the Songun revolution singing loudly the song Train Bound for the Front!"

"Add brilliance to your youth like your fathers and mothers did!

"Let us resolutely frustrate the anti-DPRK "human rights" schemes by the US and its vassal forces!"

"No force can check this sweeping advance of the service personnel and people, who are marching in fine array arm-in-arm, shoulder-to-shoulder, following the leadership of the respected Comrade Kim Jong Un, a great man of Paektu."

"Long live the 70th anniversary of the Workers' Party of Korea!"