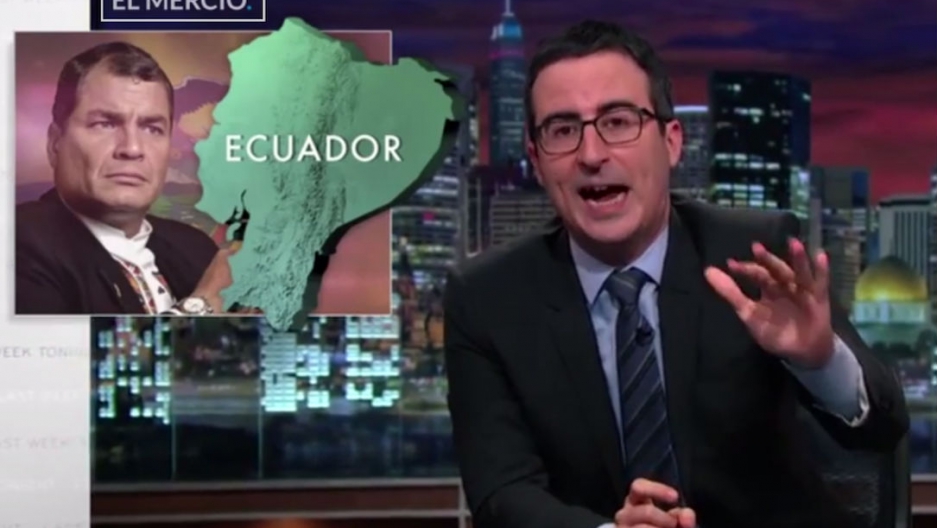 LIMA, Peru — Humorless South American president versus one of the funniest men in the United States.

There was only ever going to be one winner, at least while the weapon of choice in this duel of primetime heavyweights was the one-line zinger.

A week ago, British comedian John Oliver sparked the wrath of Ecuador’s President Rafael Correa by ridiculing him over his alleged persecution of journalists and social media critics.

The host of HBO’s “Last Week Tonight” taunted the US educated left-wing leader, who has fined newspaper cartoonists, calls on his followers to troll Twitter opponents, and routinely blasts individual journalists by name on TV without giving them a right to reply.

“If your skin was any thinner, you’d be a taint,” Oliver said during the segment.

Correa reacted exactly the way you might expect of a domineering, short-fused leader used to getting his own way.

The president, who is democratically elected but has been heavily criticized by human rights and media freedom groups for authoritarianism, hit back at Oliver on Twitter.

In one tweet, Correa describes Oliver as being more "obnoxious than a diuretic."

Apparently unaware of the United Kingdom’s long tradition of churning out comedians, from the Monty Python team to Sacha Baron-Cohen, the creator of Borat, the president adds that the term “'English comedian’ is not much less than an oxymoron.”

More from GlobalPost: Ecuador has a sinister anniversary gift for Julian Assange

Even more bizarrely, Correa then suggested that Oliver didn’t deserve to be famous because he probably thinks that “the capital of Ecuador is Kuala Lumpur.”

As if that wasn’t enough, Correa then took to the airwaves in an attempt to laugh off Oliver’s satire and give back him some of his own medicine. In his weekly TV speech, the president even pompously claimed that he was world famous for his jokes.

Here’s how Oliver responded on his show last night: