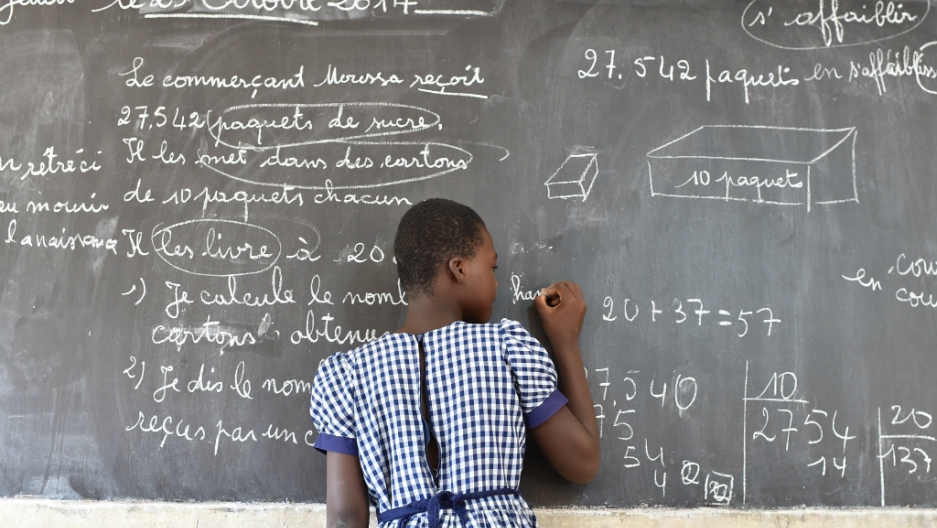 A girl writes on a black board at a primary school in Bouake, a city located in the central part of the Ivory Coast.
Credit: ISSOUF SANOGO
Share

LONDON — As long as a girl or woman is not equal in the text of a country’s law and its legal system, she cannot fully participate in, or be valued equally in her society.

Legally, she is of lesser importance. Yet, 20 years after 189 governments pledged to “revoke any remaining laws that discriminate on the basis of sex” as part of the Beijing Platform for Action, just over half of those laws have been revised, appealed or amended; a great achievement, but one that falls far short of what was envisaged.

These include laws that permit marital rape or that enable a kidnapper to avoid prosecution if he marries his victim. Other statutes do not allow a woman to pass on her nationality to her children. Still others demand that she obeys her husband. Such laws demonstrate the disrespect of governments for the fundamental right of women to equality. They are an official endorsement of the idea of women as people of lesser worth.

Justice is the foundation for equality. Without it, women and girls are enormously disadvantaged politically, economically and socially. At a minimum, legal equality gives women and girls a level playing field from which to build their capabilities and make meaningfully contributions to society.

Equality Now, an international organization that advocates for the human rights of women and girls, and other groups have focused on a global advocacy campaign targeting sex discrimination in nationality and citizenship laws. The purpose is to end the harmful practice of denying women the right to pass their nationality to their children or spouses on the same basis as men.

Senegal amended its law in 2013, and Suriname did the same in 2014.  The Bahamas is discussing constitutional changes, and other countries, such as Jordan, have proposed changes in regulation to alleviate the hardship of families discriminated against under the law.

The Global Campaign for Equal Nationality Rights, a new global initiative that launched in 2014, is building momentum to encourage governments to pledge to amend discriminatory laws in line with the Beijing Platform for Action and other international obligations.

In 2014, Equality Now published "Protecting the Girl Child – Using the law to end child, early and forced marriage and related human rights violations," which calls on governments to take a comprehensive approach to ending child marriage. Among the proposals is amending laws that allow for lower marriage ages for females than for males.

The report tracks the relationship between child marriage and such abuses as female genital mutilation, sex trafficking and domestic violence. Most recently, Yemen and Saudi Arabia have indicated that they will enact minimum age of marriage laws, but there have since been further delays.

Since many forms of violence against women and girls are interlinked, it is vital that governments recognize these relationships and ensure that their country’s laws fully empower rather than impede a girl or woman on her journey through life. Unfortunately, legislative change has not always been positive. While several countries have fulfilled their obligations since 1995, others have backtracked over the past 20 years.

Last year, Kenya adopted a new Marriage Act, which permits polygamy without consent of the first wife. Mali, in revising its family code in 2011, rejected the opportunity to remove the discriminatory wife obedience rule and other provisions that were found in its 1962 Marriage and Guardianship Code. Iran’s new Penal Code of 2013 maintains a provision that stipulates a woman’s testimony is worth less than a man’s.

With the twentieth anniversary of the Beijing Platform for Action on our doorstep, there is a fresh opportunity for governments to fulfill their obligations to end sex discrimination in law. Progress will happen if all countries fulfill their commitments to ensuring equality for its women and girls.

There is absolutely no reason for any government not to take action.

Jacqui Hunt is the director of the London office of Equality Now.