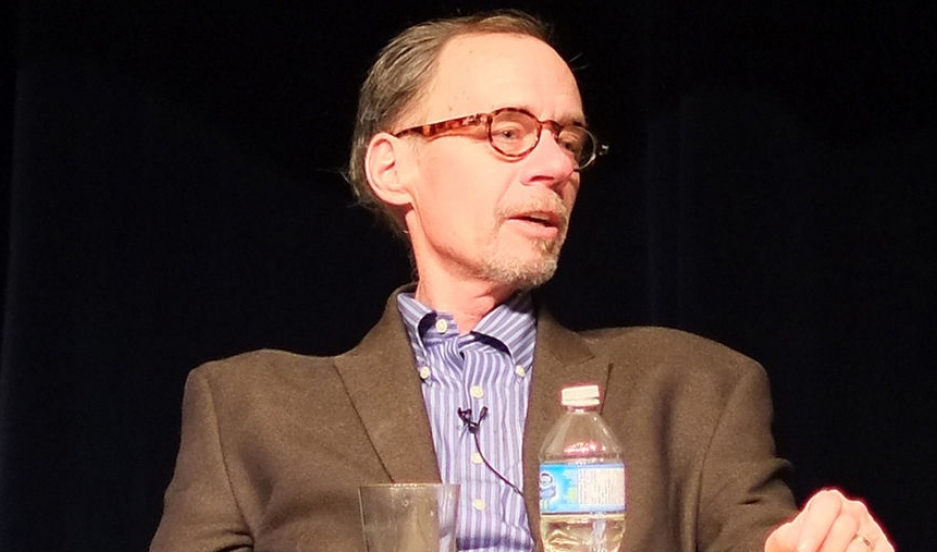 David Carr at Capilano University, in North Vancouver, BC.

But oh, you could never be sick of writer and New York Times media critic David Carr. Carr died late Thursday at the chirping young age of 58. He collapsed in the Times newsroom and died at the nearby hospital, where he was taken by ambulance.

Carr was the life of every party he ever attended. It almost killed him and you can read about it in his memoir of addiction and recovery, The Night of the Gun.

Carr's dinner conversation made you forget any celebrity chef, maybe because he always talked through dinner, barely touching his food. He was always thin as a rail. He was a delightfully grumpy old curmudgeon about digital journalism. He was a heroic advocate for the values of traditional newspapers. But ironically, he was beloved in the digital world.

Reports of his death exploded online, where his blogs and columns were widely read. To be attacked by David Carr was the highest of compliments.

He was undoubtedly the best media critic of his generation, understanding all media — the new without any gee-whiz hype and the traditional without any sanctimonious pap. How will we live without his takedowns of the glitzy ballgown stars of Hollywood, in his voice of gravel and burlap?

Hard living, tough talking and his love of life and the Times he worked for made him larger than life. His passing tangibly shrinks the world. For all the renegades in the world he was always coming out of a door they were stepping into.

David Carr: He's been there, he's done that.

This commentary was adapted from PRI's radio show The Takeaway.

David Carr embraced the medium of Twitter as he embraced every opportunity to spread truth, beauty and humor.

We all looked to @carr2n to make sense of the media revolution & to contemplate the future. A future without him is terrible to contemplate.

Watching all this grief for @carr2n pour forth and testimonials, it's a good reminder of what matters: Be good. Be kind. Be generous.