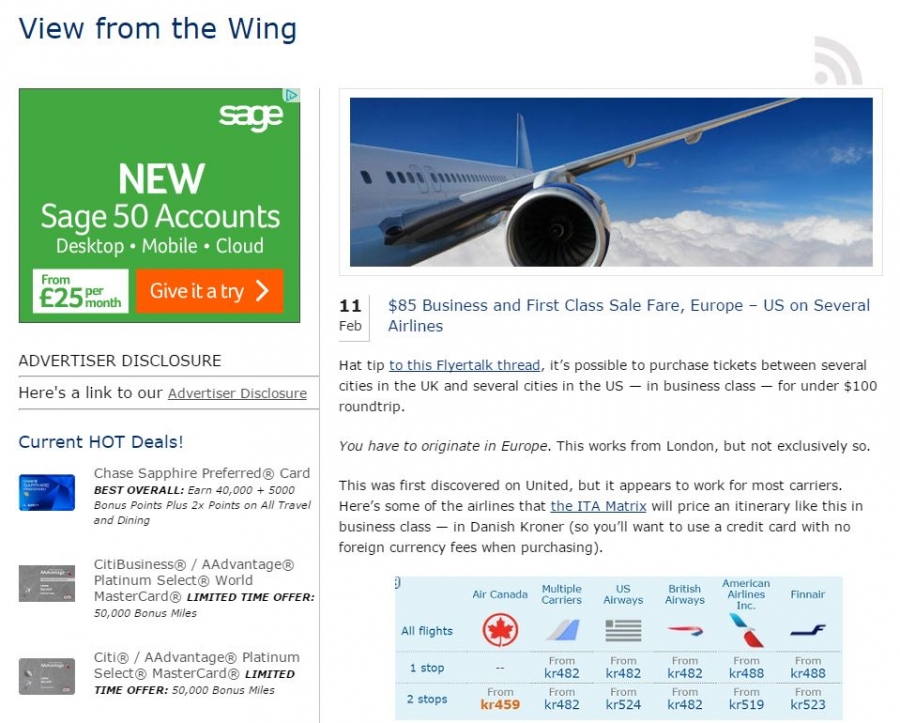 If you were bopping around online yesterday morning, sometime between 4 and 9:30 am, and you are the particular kind of traveler who frequents sites like View from the Wing or Flyertalk, you may now be the proud holder of some very, very cheap airline tickets.

It appears there was a computer glitch with a third party software provider that bungled currency conversion. Something about the British pound and the Danish kroner.

The mistake apparently affected several airlines, but was most easily exploited on United Airline's Danish site.

Brian Kelly, founder of ThePointsGuy.com, said "it was one of the biggest mistakes I've seen in years when it comes to airline pricing errors."

Canny travelers picked up first-class trans-Atlantic tickets for as little as $44 each way. Kelly grabbed a few of those, from London to New York, and what he calls a mega-trip from London to Sydney.

"You know, my attitude is, 'let's get in and if the airline honors it, great, if not then it was a fun rush for the morning.' It got me going yesterday," Kelly said.

United Airlines has told Kelly and the others who got in on the deal to hold off from packing their bags.

They'll get their money back — rather than seats. In a statement Wednesday, United said it wasn't going to honor the tickets for several thousand individuals who were "attempting to take advantage of an error a third-party software provider made."

United does have a point. Ticket buyers outside of Denmark — and there were a lot of them — really had to do some online finagling to get these deals.

But Kelly said he still doesn't feel a bit sorry for the airline.

"Frankly, from a consumers perspective, United has made monumental mistakes that hurt the consumer and hasn't made good on them in the past. So I don't feel too badly for United, they're a pretty customer Un-friendly airline," he says, poking fun at United's current "Flyer Friendly" advertising scheme. "I don't feel like they have to honor this, necessarily, but I don't really feel too bad, especially because they're coming out swinging here when, frankly, they should invest in better IT."

Consumers who want to swing back can file a complaint with the US Department of Transportation. Airlines have been forced to honor previous so-called mistake fares because a specific federal reglation, Code of Federal Regulations number § 399.88, requires airlines to honor any ticket that has been paid for and issued. Whether that specific regulation will apply in this case is unclear — but many frequent fliers who bought these cheap tickets have vowed to find out.

United's lawyers will likely be wrangling with the DOT for some time.