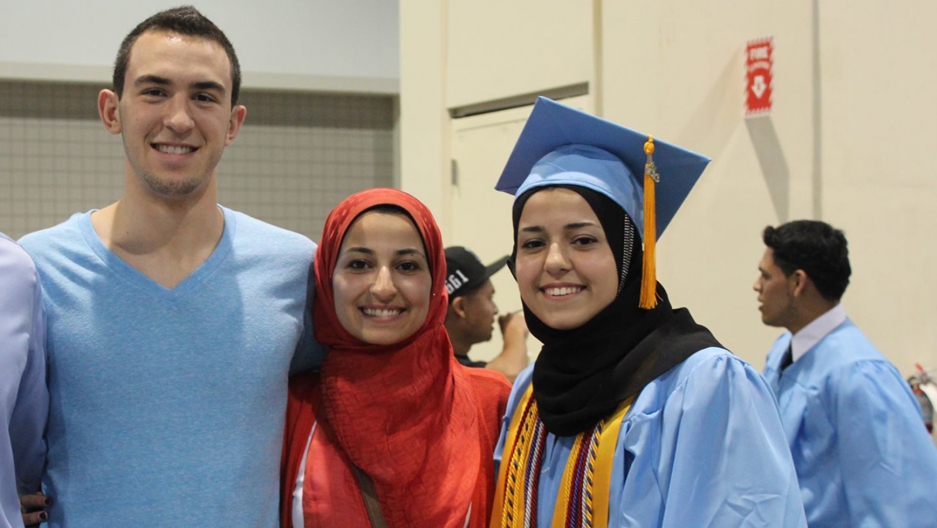 Deah Shaddy Barakat, 23, his wife Yusor Mohammad, 21, and her sister, Razan Mohammad Abu-Salha, 19 were shot and killed on Tuesday. Muslim Americans around the country have taken to social media to highlight the killing using the hashtag #MuslimLivesMatter.

Thousands of Syrian refugees will benefit from their legacy. But the friends of slain husband-and-wife Muslim students cannot muster much enthusiasm for the outgoing of support in their memory.

Before he was killed on Tuesday, Deah Shaddy Barakat, 23, had hoped to raise $20,000 to provide dental supplies to Syrian refugees. This summer, his plan was to travel to refugee camps in Turkey with some of his University of North Carolina-School of Dentistry classmates.

By early Friday, more than 6,000 people contributed more than $330,000 to Barakat's donation page. This windfall of donations means that the Syrian American Medical Society, which was collaborating with Barakat on the mission to Turkey, will be able to open two more dental clinics at Syrian refugee camps and fund other medical missions- all in the name of Barakat and his wife, who was recently accepted to UNC's dental program.

“It’s been said that there could be a silver lining," said Dr. Ala Dean Attar, a Chicago-area dentist. Last summer, Barakat had asked Attar, a member of the Syrian American Medical Society, to lead the trip to Turkey. "The tremendous outpouring of support — and you think, 'Wow, $300,000 or half a million is going to go a long way for the refugees.' That was [Barakat's] legacy, that’s what he wanted, but you could never replace such a loss of human life."

Barakat was conntected to Attar, through a mutual friend. Attar had made medical mission trips to Syrian refugee camps and to Syria before, and agreed to help Barakat.

"He asked me to head the mission and really be a big part of it. Since then, we've been talking about it once a week. My whole relationship with Deah was really on the phone, but I feel like I know him like a brother," Attar says. "He was someone who was doing such good work. He was a hero, really. We were really looking forward to meeting each other."

"He's Syrian American. I'm Syrian American. His parents are first-generation Syrian and mine are too. He was very passionate and very commited to doing something about the situation in Syria."

Attar says that despite Barakat's unexpected death, he and the group of UNC dental students still plan to go to Turkey in July.

"But the whole trip has changed now," Attar says. "We are now going to do the trip in Deah and his wife's honor."

Barakat, his wife Yusor Mohammad, 21, and his sister-in-law, Razan Mohammad Abu-Salha, 19, were fatally shot near campus on Tuesday night, and a man with a history of hate speech, has been arrested in the crime.

Barakat and his wife had a history of charity, both to the homeless in Chapel Hill and to refugees abroad. Facebook photos on Barakat's profile show him handing out food and dental supplies to Chapel Hill's homeless community just two weeks before they were killed.

How Some People Are Showing Solidarity

Deah Shaddy Barakat was coordinating a trip to a Syrian refugee camp in Turkey this summer, in collaboration with the Syrian American Medical Society (SAMS) and a group of dental students from the University of North Carolina- Chapel Hill. His goal was to raise $20,000 to provide dental supplies to refugees. Since his death, Barakat's donation page has blown up. At last count the page showed more than $240,000 in donations.

Here is a video of him explaining the project:

Dr. Zaher Sahloul, president of the Syrian American Medical Society, says it currently oversees 25 dental clinics in Syrian refugee camps. The two new clinics will be in Jordan and Turkey, he says. Sahloul also says that one of their dental clinics — inside the Reyhanli refugee camp on the Turkey-Syria border — was renamed after Mohammad on Wednesday night. Last summer, Mohammad and her mother had volunteered at that dental clinic.

On Wednesday night, Layla Barakat stood before thousands of grief-stricken people, just hours after her son and her daughter-in-law were killed by a man police identified as Craig Stephen Hicks.

According to a press release from the Chapel Hill Police Department, officers were responding to a report of gunfire near the Chapel Hill campus on Tuesday night and found Barakat, Mohammad and Mohammad Abu-Salha dead.

As the news broke, Muslims around the world sent social media buzzing. Tweets and posts on social media sites, like Facebook, have been going viral with the hashtag #MuslimLivesMatter. But many are now using other hashtags such at #ChapelHillShooting and #withMuslims.

Not so, said the father of the slain sisters, Mohammad Abu-Salha. "It was execution style, a bullet in every head," Abu-Salha tells newsobserver.com. "This was not a dispute over a parking space; this was a hate crime. This man had picked on my daughter and her husband a couple of times before and he talked with them with his gun in his belt. And they were uncomfortable with him, but they did not know he would go this far."

Hicks appeared Wednesday, briefly, before a judge, requested a public defender and was denied bail.

The families of the victims created a Facebook page called "Our Three Winners" that highlights the lives of their children. The page already has more than 147,000 "likes."

Barakat and his wife were part of local organizations that provided dental supplies to the homeless population of Chapel Hill.