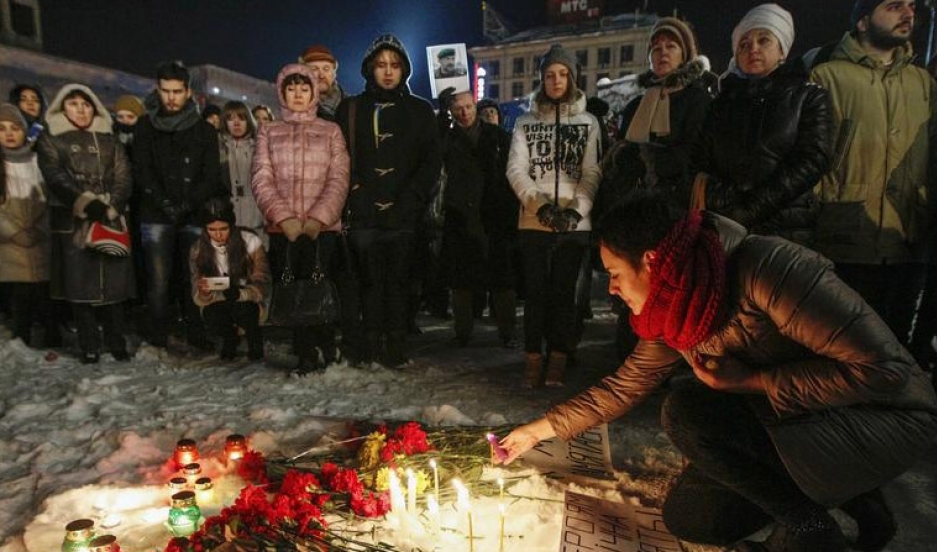 At Independence Square in Kiev, Ukraine, people take part in a vigil in memory of those who have lost their lives in eastern Ukraine, February 6, 2015.

Natalya Romanyuk never expected that she wouldn’t be on speaking terms with her brother. She comes from a close knit family. But the fighting in Ukraine changed that.

When pro-Russia rebels rose up in eastern Ukraine, Natalya looked on from Kiev. Her brother and mother were living in a very different situation in the east near Donetsk.

They haven’t really been able to talk about politics in their country ever since the protests began in Maidan Square last year.

“When people were beaten up in Maidan and the whole city rebelled, I talked with [my brother] in the evening and he really shocked me with saying that people that were beaten up were to blame — 'It’s not the police, it’s them,'” remembers Romanyuk.

Her brother thinks the events in Maidan are the reason for the current war in the east.

Romanyuk is a television producer in Kiev, but she grew up in eastern Ukraine speaking Russian as her first language. As a child, she had a very different outlook on western Ukraine. She still remembers her first trip to western Ukraine when she was afraid to speak Russian.

She says Russia may have used that notion. "Maybe this was some button that was pushed a half year ago by the Russians.”

Romanyuk no longer speaks with many of her friends and former classmates who are still in eastern Ukraine. She stopped speaking with them during the protests in Maidan, when they stopped listening to her reasons for supporting the protesters.

Her friends in the east are blaming her for the violence there. “I think there’s something in the water," she says, "because for some reason, people at some point, they stopped thinking.”

Romanyuk believes the war in the country could end. “I think when Russia stops supporting it, it will all end really soon."

But that would leave a deep wound to be healed. "I don’t really know what to do with people there," she says, "because they’re all really confident now that [Ukrainians] are their enemies and that’s really sad."