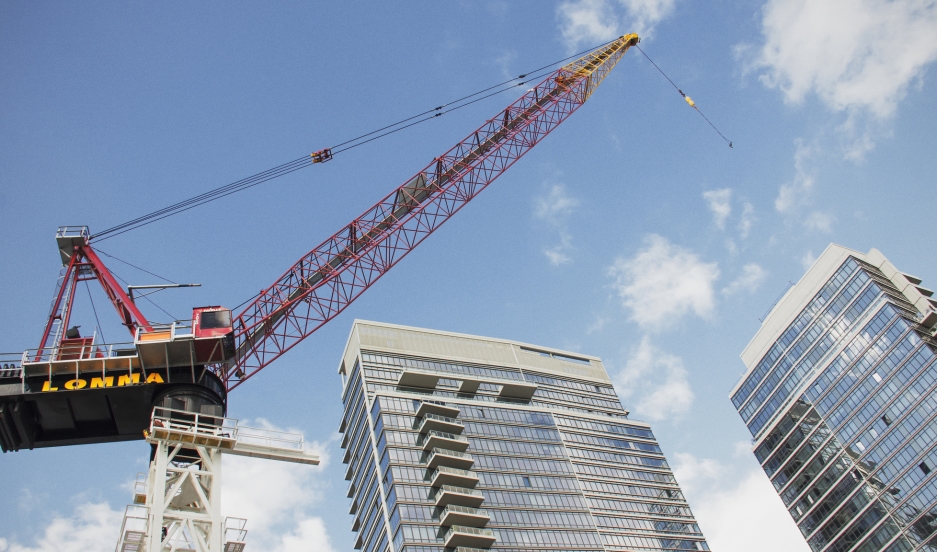 A construction crane rises above a condo development in Brooklyn's Williamsburg neighborhood in 2013.

On a trip to Beijing last November, President Barack Obama announced that the United States would expand its visa program for Chinese citizens.

"Chinese direct investment in the United States has risen sixfold over the past five years," Obama said in a speech at the APEC CEO Summit. "Chinese firms directly employ a rapidly growing number of Americans ... All these things mean jobs for the American people, and deepening these ties will mean more jobs and opportunity for both of our peoples."

Much of that increased Chinese money is going into the housing market. Chinese investment in American real estate went from $600 million in 2009 to $12 billion in 2013. That year, China also changed its laws to allow Chinese citizens to invest up to $1 billion overseas, a tenfold increase over previous limit.

While Canada still supplies the most foreign real estate buyers to the US, China now comes in second. And Chinese buyers are much more likely to invest in higher-income properties in urban areas like New York and San Francisco, already two of the most expensive cities in the US.

“There’s this relatively new trend of people buying properties in the city and not actually spending a lot of time living here,” says Ilya Marritz, a producer for WNYC. He spoke to John Liang, the executive vice president of Xinyuan Real Estate Company — the only real estate development company based in China and listed on the New York Stock Exchange.

"Not in my wildest dreams would I be planning on a major Chinese investment movement into the US as we're experiencing today," Liang told Marritz.

The Xinyuan Real Estate Company is building a seven-story condominium on the Williamsburg waterfront in Brooklyn. Though the company hasn't said this property is specifically for foreign buyers, Marritz says they are marketing to many buyers in China.

So far, about 20 to 30 percent of those buying property in the Brooklyn building are Chinese who still live in China and are not New York residents.

“Maybe [Chinese buyers will] live there, maybe their kid will go to NYU one day or maybe they’ll just rent it out,” Marritz says. “I did spend some time talking to one buyer, Wenzhou Xie, a mining executive based in Hong Kong. He said he expects to collect rent of about $3,000 a month on a one bedroom [apartment] ... We’ll find out in a year or so when he takes possession of the apartment whether he can get that rent.”

Stephanie Martin-Taylor, a news anchor and reporter at San Francisco's KQED, says something similar is happening in Silicon Valley.

“The tech boom is driving up prices,” she says. “We’ve got tech workers who are very well-paid and are competing with everyone else for a relatively limited supply of housing. And we’ve also got a lot of foreign investment coming into the city and surrounding areas.”

Martin-Taylor says most of the foreign investment being poured into the San Francisco area is coming from China and other Asian countries. A Beijing-based firm called China Oceanwide Holdings recently agreed to buy a piece of “prime real estate” in downtown San Francisco.

“Its plans are for a mixed-use development that will include the second-tallest tower in San Francisco next to the Transamerica Pyramid,” Martin-Taylor says. “Also, you’ve got an increase in individual Chinese buyers who want a piece of this market.”

She says some Bay Area real estate companies have even been changing their strategies in order to cater to Chinese investors. Pacific Union, the largest real estate firm in San Francisco, has set up offices in China to help wealthy buyers navigate the market.

“It's a demographic that's accelerating its appetite for investment in real estate for purposes of education, for purposes of lifestyle, for purposes of clean air — and really, to diversify a portfolio that is being governed by a government that could change their idea overnight when it comes to what you're allowed to do with your money," says Mark McLaughlin, the CEO of Pacific Union.

With wealthy Asian investors moving into the San Francisco market, Martin-Taylor says that some locals are now being priced out of the market.

“The money coming from China is really helping some projects get literally off the ground, and it’s increasing our housing stock,” she says. But "people who are a little more skeptical wonder who is really going to live in this [kind of] housing. Is this really going to be an investment in our communities and make it possible for all people to live here?”