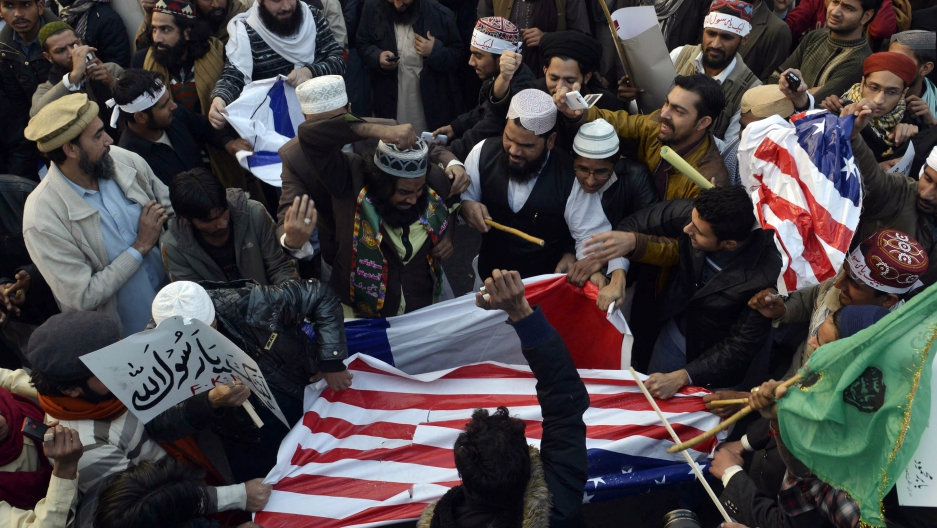 Pakistani Islamists tear French and US flags during a protest against the printing of satirical sketches of the Prophet Muhammad by French magazine Charlie Hebdo in Lahore on January 27, 2015. The magazine then published a 'survivors' issue with an image of Muhammad weeping on the cover, triggering a wave of angry condemnation and protest in Muslim-majority countries across the world including Pakistan.
Credit: Arif Ali
Share

BOSTON — The world is still reeling from the shock of the atrocities that occurred in Paris last month. I count my country among the bereaved, especially as the four victims of the attack at a Paris kosher market were laid to rest in Israel.

While footage of the tragedy dominated the networks and “Je Suis Charlie” flashed across my computer, I recalled the birth pains of international counterterrorism efforts I witnessed firsthand immediately following 9/11. And while advances have been made since then, diplomatic obstacles created weaknesses that now hamper the fight against those who seek to terrorize freedom.

Countless men and women of many nationalities have risked and lost their lives since September 2001, and immeasurable ground has been gained in the fight against terror because of their sacrifices. But for the past decade the main pitfalls can be found in the diplomatic and political worlds, where universal norms should be created and implemented but all too often are not.

The original sin: On Sept. 28, 2001, the UN Security Council adopted its landmark Resolution 1373, requiring that states prevent the financing of terrorist acts; refrain from providing any form of support to terrorists; block their citizens from involvement in terrorism; deny safe haven to terrorists; prevent the movement of terrorists from their territory; bring terrorists to justice, and increase cooperation with other states in these efforts.

Back then, this document was considered by the fledgling diplomatic counterterrorism community as the plan that would get the job done. And why not? The resolution was adopted as binding under Chapter VII of the UN Charter, and contained many of the elements required to cement international cooperation.

The road map was crystal clear, but unfortunately the road itself has been quite bumpy. Why? The state sponsors of terrorism do not intend to cooperate. We have yet to find a way to force them to do so, but a solution must be found because submission to threats and intimidation from jihadist extremists and their apologists will, in the end, undermine the foundations of democratic societies.

Beyond implementation of 1373, the international counterterrorism community has yet to address two basic yet increasingly problematic issues: defining terrorism itself and combating the dissemination of ideologies that encourage it. These two elements have tended to cause likeminded countries to bicker as much as to cooperate.

State sponsors of terror have taken advantage of these shortcomings. Iran is the most blatant example; terrorist groups like Hezbollah and Hamas have been inflated to huge proportions under its tutelage while the world basically looked on.

Indeed, it took years for a group like Hezbollah to warrant the EU’s designation as a terrorist organization. I was involved in the initial effort in 2004, which culminated only in 2013 in the wake of the Hezbollah attack that killed five Israelis in Burgas, Bulgaria. The years preceding this decision were often spent debating whether a terrorist group engaged in political activity was in fact a terrorist group at all.

One can trace the failings of UNSCR 1373, and other diplomatic weaknesses, to a fatal array of attacks since its adoption in 2001. The murders at Charlie Hebdo and HyperCacher, as well as the 2014 Gaza War, are just the latest examples. I find it unlikely that they will be the last.

As with all tragedies, a silver lining must be found. If there is any consolation in the events in Paris, it is that these madmen and their partners who seek to bring us to our knees are instead causing us to stand tall. The task before us now is to stay standing, to remain steadfast in our declared principles and to fight back without any hesitation or interference from terrorism's supporters.

Yehuda Yaakov is Consul General of Israel to New England.