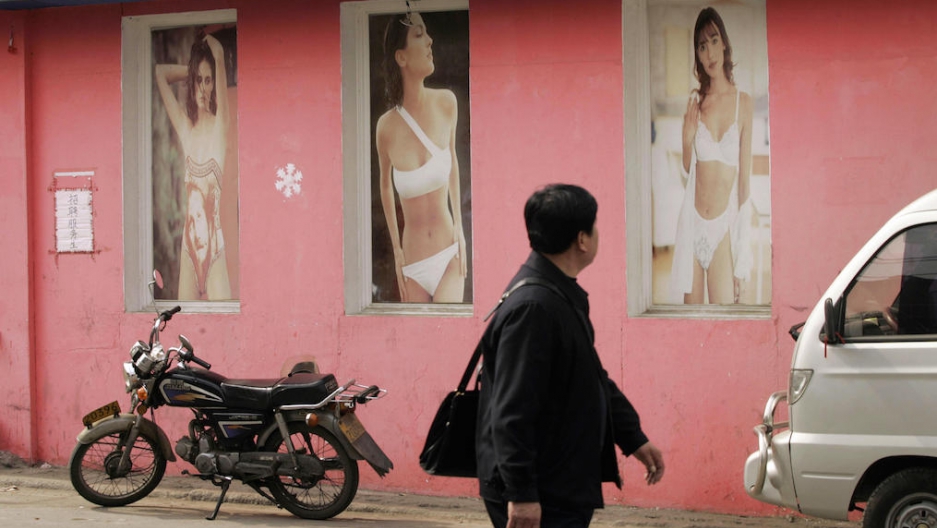 A passerby looks at pictures of scantily-clad women in front of a karaoke bar in Beijing. China has been rocked by scandals involving schoolgirls lured to karaoke bars, where influence peddlers or their operatives force them to have sex with officials.
Credit: Peter Parks
Share

According to Chinese media reports, the goal of the crimes is often to curry favor with authorities, in an effort to acquire permission for business opportunities — essentially child rape as a form of bribery.

Accusations of schoolchildren being sexually exploited by Chinese officials are shockingly common. The alleged rapes follow a similar pattern. Victims are typically lured to a suitable venue — such as a hotel or a karaoke parlor — by older females acting in cahoots with businessmen. In some incidents, when parents have complained, authorities have attempted to cover up the crimes. In one case, police arrested the parents to prevent them from seeking justice.

In December, authorities in Yunnan confirmed they were investigating a ring said to involve “dozens” of high-school girls “given as gifts for leaders outside the county to use.” A female intermediary, known as “Xu,” bribed the girls to visit a local karaoke bar, where they were plied with alcohol — some say they were drugged — and raped.

Xu’s reputation at the school seems to have been fearsome: “No one dared to disobey her,” one girl told reporters.

The school’s headmaster denied the claims. “If that many students were selling sex,” he wondered, “what would people think of our school?”

The Yunnan case echoed a previous racket in the provincial capital of Kunming, in which as many as 50 schoolgirls were recruited. In Hainan, a school’s headmaster allegedly joined a local official and six students in drug-induced sessions; in Henan, naked photographs of dozens of schoolgirls were used as blackmail to force sex with officials and to bring in new recruits. This crime allegedly occurred at a nightclub and spa just yards from a police station.

In the latter case, arrests were finally made (including of several underage suspects), but to many local citizens the convictions were not satisfactory. The club’s owner was given seven years for running a brothel. Five junior officials received only suspended sentences for neglecting their inspection duties. “There's nothing we can do about it given the fact that the government turns a blind eye to these dark things,” one man told a McClatchy reporter about rumors that senior cadres had paid their way out of trouble.

Similar uncertainty surrounds a grievous case at the Wuqi County High School in Shanxi last September. (Due to local censorship, it was only reported in late December).

According to a Chinese language press account, in the Wuqi case five girls were hauled before a “tribunal” of seven older female students. Over the next six hours, they were hit, stripped, examined and insulted. They had their clothes removed with blades, and were forced to hit each other. The proceedings were photographed, and the victims were threatened with exposure, in what the parents claim was a failed attempt to force the girls to sell their virginity. The victims ended up in the hospital for several weeks. Two suffered perforated eardrums.

After this, the story gets hazy. Sources told Legal Weekly the recruitment of Wuqi schoolgirls for officials by seniors is common, with the students usually taken to a hotel to be “assessed” by a recruiter. Suitable virgins would fetch 5,000 yuan. According to at least one victim’s parent, two of the adolescent bullies had “ill-gotten” sums of about $130,000 and $195,000 in their bank accounts, allegedly handed over by unnamed businessmen to procure girls. The bullies’ parents claimed the funds show that their children were “victims” too.

Like an endangered species, virgins fetch higher prices, serving an appetite that covets the rare and indulges the powerful.

Headmaster Zhang Junyin declined any responsibility other than mediating a settlement. (Zhang has since been removed from his post). The school’s indifference prompted several parents to petition Wuqi authorities. The parents were eventually physically evicted for their troubles. They then tried kneeling before the county’s city hall, a tactic of last resort that resulted in five days’ imprisonment for interrupting the government’s “work order.”

“We really had no choice,” a government spokesperson claimed.

The involvement of local officials remains, for now, an allegation: The Beijing News quoted police saying that, despite reports to the contrary, none have been detained, and “repeated investigations” had failed to unearth “any public official involved in prostitution.”

China’s president Xi Jinping has invested his credibility in the Party’s moral authority, evoking traditional writings such as Confucius and the Tao, while vowing to stamp down on present-day abuses.

Of the Kunming victims, the BBC noted, “most were motivated not by absolute poverty but by curiosity. Many said they were impressed by the wealth and power of their clients.” In school, sex education barely exists, even while outside, the image of expensive cars waiting for concubines at their gates has become cliché.

“Prostitution can be contagious,” says criminologist Pi Yijun of the China University of Political Science and Law. “Youngsters are very materialistic nowadays. … When their family can’t meet their demands, they could turn to [prostitution] and think there isn’t much harm to themselves. Then with one girl telling another, that’s how it starts.”

An especially pernicious aspect is the fetishization of innocence within the business. “Buying virginity is a very heinous hobby of Chinese,” says Pi. It’s partly based on ancient Taoist belief that the most desirable partners for men are 14-year-old pre-menarche girls, whose "yin" will supposedly nourish their "yang" and grant longevity.

More pressingly, though, it’s a matter of economics: Like an endangered species, virgins fetch higher prices, serving an appetite that covets the rare and indulges the powerful — particularly officials, whose self-importance is enabled by an ingrained culture of deference. “Chinese care about the chastity of girls, which doesn’t exist for boys, and is therefore very discriminatory,” says Pi. “So when sex is available for sale, [virginity] is like a drug to be yearned [for].”

Powerful officials caught with partners aged 14 and above are typically charged with “underage prostitution,” which carries a maximum 15 years’ imprisonment, rather than child rape, a capital crime. “When this crime was first established as separate from rape [in 1997], it was to protect underage girls,” says Liaoning-based criminal lawyer Chi Shusheng, whose clients include Chongqing’s infamous ex-police chief Wang Lijun. “But the execution went astray.”

In 2003, Supreme Court Vice President Huang Songyou made a particularly narrow interpretation, concluding that if a “third party” (or pimp) was involved, the court regarded the crime as prostitution, whether or not the victim was informed or coerced. (Huang later received a life sentence for corruption in 2010.)

There have been campaigns in the legislature to abandon a law that shields officials while criminalizing children, but little progress has been made either there or through grassroots efforts. One activist, Ye Haiyan, was beaten and detained after a public demonstration in 2013 Ye declined to comment for this article.

“I absolutely think [the law] should be abandoned,” adds Chi. “I don’t know why it hasn’t.”