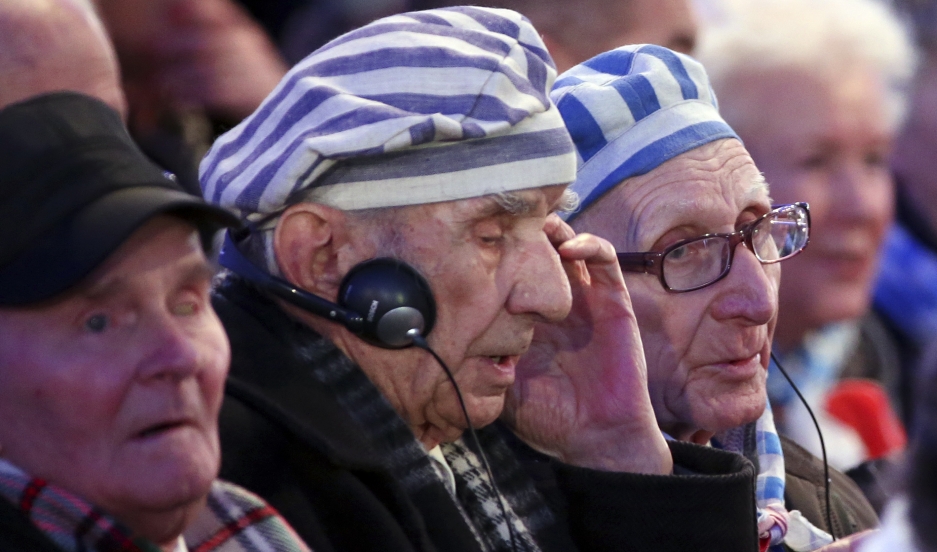 Survivors attend a ceremony on the site of the former Nazi German concentration and extermination camp Auschwitz-Birkenau in Poland. Tuesday marked the 70th anniversary of the Nazi camp's liberation by Allied soldiers.

Neither Barack Obama nor Vladimir Putin showed up at the solemn events marking the 70th anniversary of the liberation of the Nazi concentration camp in Auschwitz.

It’s not like the two leaders have parity on this one. Obama is in Riyadh, paying respects to Saudi Arabia’s royal family after the death of King Abdullah, and would have been welcomed. Putin apparently did not get the invite. (Poland and its ceremony partners are gnashing their teeth at Putin on behalf of the European Union because he annexed Crimea last year, and Putin clucks at world condemnation of Russian-backed rebels pushing deep into eastern Ukraine.)

It’s a shame the world has been rewired this way. After all, it was 70 years ago Tuesday that Stalin’s Red Army, pushing through Poland toward Berlin, liberated Auschwitz. SS leader Heinrich Himmler had ordered what would be a death march of tens of thousands of Auschwitz prisoners to other camps, leaving some 9,000 emaciated and sick prisoners and inmate staff of the camp hospital in the barracks. The Soviet troops could not believe their eyes.

The US military would liberate the Buchenwald camp in Germany three months later, where LIFE's Margaret Bourke White took these photos that shocked the world. If only Obama and Putin got along better and could seal these two anniversaries with some statesmanship symbolic of their opposition to the conditions that led to genocide, that would send an inspired message.

It’s important to remember this day. It’s natural that successive generations forget the significance — or don’t know it — when they’re not offered some engaging narrative. And we all know what happens when we forget history.

I was born in 1961, 16 years after the camps were liberated. But my father's cousins died in those camps. Those stories were in the air when I was growing up. So were my dad’s accounts of encountering recently freed and hungry Jews along a road in Germany after VE day. Most important for me, though, were my parents’ books of photos documenting the camps and seeing Alain Resnais’ Night and Fog in junior high. Piles of bodies, lifeless, souls eliminated en masse. Histories erased.

I pay attention to this anniversary of the Auschwitz liberation today because the importance of bearing witness made me want to be a journalist. I know that as many as 15,000 people died as they were sped out of Auschwitz in the days before the Russians arrived, so the Nazi killing machine could continue even when defeat was apparent. As extreme an abuse of power as that may seem, I remind others of this day to assert that we never come close to such insanity. My job is to keep telling those stories when the opportunity arises.