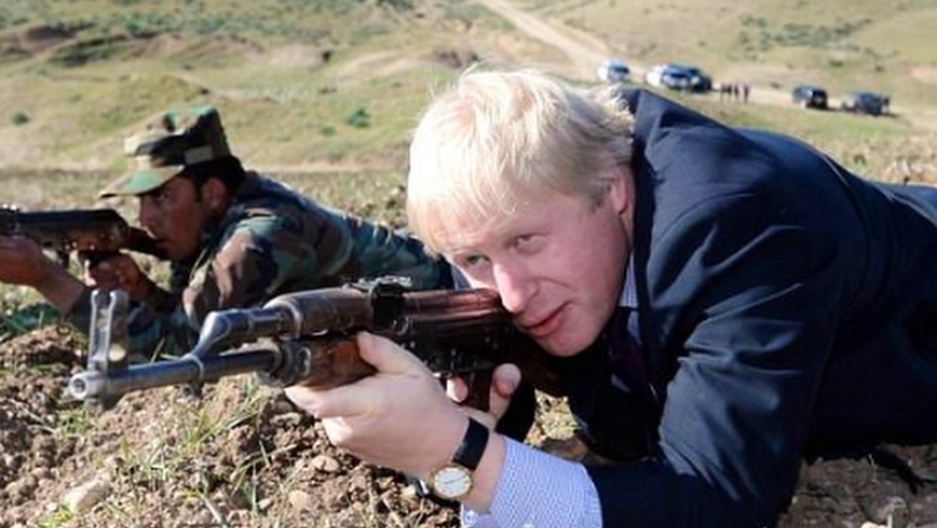 A screengrab of a photo circulating on social media of Mayor of London Boris Johnson aiming a rifle in Kurdistan in northern Iraq.
Share

So it should come as no surprise that during a visit this month to Kurdistan — yes, that semi-autonomous region in northern Iraq where Kurdish peshmerga have been fighting the Islamic State — he posed for an action shot.

Ostensibly, the mayor of London went to Kurdistan to boost economic relations and to visit British troops who are there training Kurdish fighters.

But then this happened:

This photo, which is worthy of a caption competition, shows exactly what it seems to show, but it's worth spelling it out anyway: Here is Boris Johnson lying on the ground in a business suit taking aim with an AK-47 rifle.

It's a silly photo from a serious trip. Johnson was clearly moved by his visit to Kurdistan, where the Kurds have been fending off attacks from IS fighters with the help of US-led airstrikes.

More from GlobalPost: How the Islamic State was halted in Kobani

In an opinion piece for The Telegraph, Johnson wrote emotionally about trying to comfort a widowed mother of seven, about the depravity of IS and the importance of more British support for the Kurds.

“It is hard to think of another conflict where righteousness coincides so overwhelmingly with the British interest,” Johnson said. "We should consider intensifying our military support. In a struggle against savagery that washes up on our shores, their cause is our cause.”

It's a heartfelt piece, but the photos upstaged the message.

Performing silly stunts has become an important part of the Boris brand, and it's earned him plenty of criticism. The wisecracking mayor has been described as a "mop-haired joker" and a "bumbling buffoon," among other things.

Yet Johnson has managed to win two terms as mayor of the British capital because, it seems, even his critics can't help but laugh at his antics.

That he ruffles feathers with his provocative statements and deliberately makes himself look ridiculous sets him apart from many of his comparatively dull colleagues in the conservative political establishment. And that wins votes.

Here are six other memorable moments involving the man simply known to most as "Boris."

Boris on a zipline