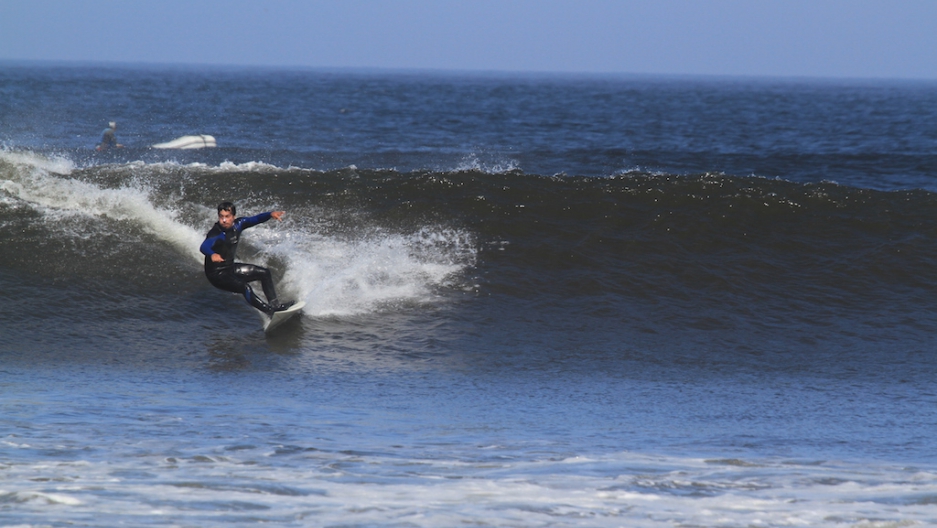 CHICAMA, Peru — The cold Pacific waters massage my dusty feet as I survey the perfectly peeling break just 60 feet in front of me.

After walking nearly a mile barefoot over a baking, rocky desert, the sensory release — and relief — coming from my suffering soles is extreme.

Surfers are a hardy bunch and will put up with all kinds of suffering to catch a wave or two. But it’s not usually like this.

For most, wipeouts, sunburn, sharp coral, and even the risk of a hungry shark mistaking them for a juicy seal, are all taken as given.

Then there’s the paddling. That’s how surfers reach the break, lying face down on their boards, moving through the water front-crawl style.

It’s exhausting, slow work. Along with leaden arms, an aching back and a crick in your neck, you also have to avoid having your board slammed into your face by walls of seawater that pack more horsepower than an NFL lineman.

And all that for what amounts to a few fleeting seconds of the undeniably thrilling sensation of harnessing the ocean’s power and riding a wave. Even at some of the world’s best-known breaks, a ride can last under 10 seconds.

But not at Chicama. This remote, windswept break off Peru’s arid northern shore is thought to be the world’s longest wave. No one’s really sure, but the consensus among surfers is that its mile-long left is the record-holder. Check out what surfline.com has to say. Or surftoday.com’s take.

In the above video, Cristobal de Col, a rising Peruvian surf star, sets a world record of 34 “carved” turns at Chicama. Four or five would be a great ride for most surfers.

That makes Chicama yet another surfing highlight along Peru’s 1,500-mile coast. Here you’ll find breaks for all levels: from newbies just looking to learn to stand up to elite big wave riders risking life and limb on stories-high waves.

When Chicama’s four distinct sections connect, which requires a 6-foot-high swell, skillful surfers who have taken the days needed to study it can catch a ride for three to five minutes — an eternity in surfing.

That takes them from the point, an isolated rocky outcrop where the wave starts to peel, to a long industrial pier, jutting from the tiny fishing town of Chicama, on the barren coast.

Of course, they still have that 20-minute walk back to the point, and then the quick 60-second dash of paddling, to catch their next ride. But, given Chicama’s topography, the paddling-to-surfing time ratio here could not be tinier.

Even when the entire wave isn’t breaking, they’re still longer than most surfers’ fantasies.

“Chicama’s waves aren’t just long. They are perfectly shaped. They couldn’t break for as long as they do if they weren’t,” says Gino “Chato” Guillen, my surf-crazed neighbor in Lima who has agreed to show me around Chicama.

“You don’t need to surf the whole break to appreciate what’s special about this place,” adds Guillen, who is a surf instructor, judge on Latin America’s pro circuit and a tourist guide.

Chicama’s waves are also extremely reliable. While many other famous breaks around the world vary with the seasons, Chicama can be depended on year round to pump out beautifully formed breaks, like nature’s assembly line.

More from GlobalPost: On Location Video: Can a cable car save this lost Inca ruin?

No one knows Chicama’s break as well as Victor Castillo, a 50-year-old local fisherman and surfer, whose life story is inseparable from that of the wave.

He began surfing at age 6, back in 1972, when a couple of Hawaiians on a yacht pitched up at the sleepy village. The pair had been sailing down the coast from California, surfing any breaks they could find.

At Chicama, they quickly realized they had hit surfing’s holy grail — and stayed for a year, according to Castillo. He says they taught him to become the first local to surf and, when they finally left, they donated three old leash-less, wooden Hawaiian boards.

Castillo, who went on to become a national juvenile champion, says he was hooked. Yet many in the small town disapproved of his new obsession.

“They used to tell me that I came from a poor family and that I should be helping my dad instead of wasting my time surfing,” says Castillo, as he polishes off a lunch of ceviche, the citrus-marinated seafood dish typical of Peru, at his home overlooking the break.

“‘You are not a gringo,’ they would say. Now the same people who criticized me want their children to be surfers.”

“Surfing has changed us for the better. It has changed the culture, and given us a new appreciation for the sea and the environment.”

That’s partly because surfing has done good by Chicama. It has brought a modest but steady trickle of tourists, allowing locals to set up restaurants, hotels and rental businesses.

Still today many hardy locals surf bare-chested in the cold Humboldt Current that wells up along most of Peru’s coast, without the expensive wetsuits that most gringo visitors wouldn’t think of entering the water without.

“Surfing has changed us for the better,” Castillo says. “It has changed the culture, and given us a new appreciation for the sea and the environment. Here, the fishermen respect the dolphins. No one would harm them. And we don’t litter the beach.”

Now at 50, a typical day for him begins in the early hours as he motors out to sea to retrieve his catch.  He then surfs for a couple of hours around 6 a.m., when the waves are at their most “glassy” and perfectly sequenced, before taking it easy in the middle of the day. In the evening he heads out on his boat again to put the nets back down.

Above, Chato Guillen surfs about 10 percent of a Chicama wave earlier in January. Filmed by Jesus Florian Castillo for GlobalPost.

During my 48 hours in Chicama, the swell never grew enough for the entire, ridiculously long wave to connect its different sections. I also learned that surfing the whole thing requires some serious skills and several days of studying the break — neither of which I had.

But even just riding 5 percent of its entire length was a thrilling experience.

As one visiting surfer, Thor-Magnus Sveen, a 28-year-old Norwegian taking time out between jobs to surf Latin America, put it:

“People forget what surfing is about. But not here.
“It’s about having fun, getting in the water, getting active in the sun. People here all seem to have a smile on their face. Where I come from, you are surfing in icy water, with a 6 millimeter wetsuit [i.e. really thick] and there aren’t even any waves.

“Chicama is a great place to surf, and to get better. It’s not too touristy and there is a really good vibe. Everyone here is friendly and I hope that never changes.

“The landscape is incredible too. The desert is really dramatic and the sunsets are huge because we are so close to the equator. They are amazing. And they are even more amazing if you see them from the water, while you are surfing.”

Thousands of years before the Hawaiian sport arrived in Peru, fishermen on tiny reed rafts here famously learned how to hitch a ride back to shore on the Pacific’s crashing waves. In  modern times, one of surfing’s first ever world champions was Felipe Pomar, a Lima local who won the crown back in 1965. Surfing is now a big part of the culture along Peru’s Pacific coast, which is home to many famous breaks. In addition to Chicama, known as the world’s longest wave (see previous page), here’s a selection of other prime surf spots.

This famous Lima beach, next to the Rosa Nautica pier, is a great place to catch your first wave. Various surf schools will rent you a board and wetsuit on the spot and set you up with an instructor.

These are two other classic Lima breaks a few minutes’ walk to the right of Makaha. Pampilla is a longish break, running up to 70 yards on a good day, where longboarders often hang. A bit farther along is Punta Roquitas, where younger surfers on shorter boards show off their tricks.

Forty-five minutes south of Lima, this surf hotspot is home to numerous breaks including Señoritas and Caballeros, where the 2010 World Surfing Games, won by Peru, were staged, and Pico Alto, a humungous wave that doesn’t even start breaking until the swell reaches around 12 feet. Pico Alto is now a staple of the world big wave circuit and, when it’s pumping, hosts some of the biggest names in global surfing.