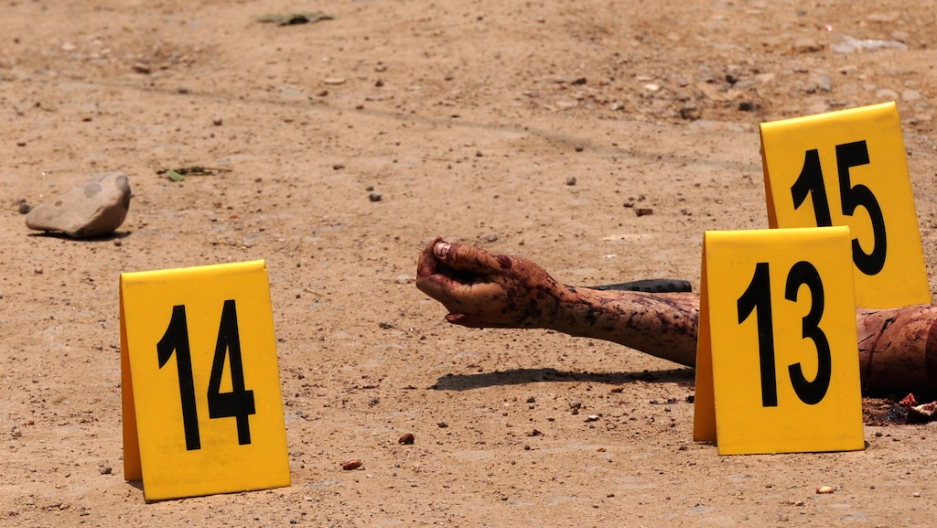 A crime scene in which five people, including a high school student, were shot dead in a suburb in northern Tegucigalpa, Honduras, on April 15, 2013.
Credit: Orlando Sierra
Share

MEXICO CITY — Suffering from drug cartels, “mara” street gangs and rampant corruption, Latin America dominates the list of the world’s most murderous cities, with 43 of the 50 top homicide rates in 2014, a new report says.

The United States also has four cities on the list, compiled by Mexican nongovernmental Citizens Council for Public Security and Criminal Justice and released Tuesday.

The NGO makes the annual comparisons in order to put pressure on governments, mayors and others to improve security, said council President Jose Antonio Ortega.

“This is useful because governments react to the figures and want to improve their ranking,” Ortega said. “It is also useful for civil society to make demands to the authorities to reduce the level of homicides.”

The report only includes cities with over 300,000 residents. The NGO relies on government counts of homicides for last year, mainly from police records.

In the case of Venezuela, however, the researchers turned to morgue and media records.

“The Venezuelan government tries to hide the size of the problem it has,” Ortega said, with capital Caracas second on the list.

More from GlobalPost: Latin America: The cost of murder

It is also hard to find accurate murder rates for Iraqi cities such as Mosul, under the control of the self-proclaimed Islamic State and being bombed, so it is not on the list. Outside war zones though, Middle East homicide rates tend to be low.

High murder rates in Latin America are due to a range of factors, including organized crime, impunity and corrupt police, Ortega said. The majority of murders in the region are by firearms, even though many countries, including Mexico, have prohibitive gun laws.

Here’s a look at some of the worst in the report. We chose to highlight one city per country as opposed to listing, say, all of Brazil’s 19 deadly places crowding out the list. Also, Mexico really has 10, Colombia has five, Venezuela and the US each have four, South Africa has three, Honduras has two and El Salvador, Guatemala and Jamaica have one each.

San Pedro Sula remains the most murderous city on the planet, while Honduras itself is cited by the United Nations as the world’s most homicidal country.

The city suffers from heavily armed “mara” street gangs and the incursion of Mexican and Colombian drug cartels.

Activists also blame political violence that followed a 2009 coup against then President Manuel Zelaya, who soldiers flew out the country in his pajamas.

More from GlobalPost: Do these displaced Hondurans deserve asylum in America?

Murders have been climbing steadily in Venezuela amid an economic slowdown, accusations of corruption and political friction.

Caracas is home to hundreds of street gangs based in slums surrounding the capital. Making things worse, Colombian drug cartels use their neighbor Venezuela to move cocaine toward the United States, according to the US Drug Enforcement Administration.

There has also been violence between government supporters and opposition protesters.

A grave in Pueblo Viejo, in the outskirts of Iguala, Guerrero state, Mexico, on Oct. 6.

Mexico continues to suffer from a turbulent conflict between cartels fighting over the billion-dollar drug trade to the US and local rackets including extortion.

The resort city of Acapulco was once a hang out for Elvis Presley and Tarzan star Johnny Weissmuller but now has replaced Ciudad Juarez as the most murderous city in Mexico.

Acapulco is in southwestern Guerrero state, where police officers and cartel hit men are accused of attacking students in the city of Iguala, triggering Mexico’s biggest protests in years.

In recent years, Brazil has suffered from the highest total number of homicides in the world, with more 50,000 killings annually.

Gangs known as commandos operate in the country’s “favelas” or slums fighting over territory to sell cocaine and marijuana. Shady militias who fight these gangs also add to the violence.

More from GlobalPost: Brazil: 'Get your coke and weed here!'

While killings have long been documented in Rio de Janeiro and Sao Paulo, the bloodiest cities are now in other parts of the country, such as Joao Pessoa on the northeast coast.

As police have hit gangs in the major cities, many of the criminal organizations have moved to smaller towns, which have their own favelas as well as cocaine and crack markets.

Colombia has improved its security markedly in recent years, but still suffers from violent areas.

The bloodshed is driven by drug cartels, with Cali being home to traffickers and close to important cocaine-producing areas.

Groups of former paramilitaries have also moved into drugs and rackets, including illegal gold mining and extortion.

And leftist guerrillas still operate, although the largest group, the Revolutionary Armed Forces of Colombia, or FARC, is in peace talks with the government and began a unilateral ceasefire on Dec. 20.

The capital of this Central American nation is divided between two bloody gangs, the Mara Salvatrucha and Barrio 18, who fight over territory to extort businesses.

In 2012, the gangs made a truce sponsored by some elements inside the Salvadoran government, leading to a marked fall in homicides.

However, when President Salvador Sanchez took power in June 2014, he said there would be no more deals with gangs, and the truce has largely collapsed. Homicides in San Salvador shot up 36.79 percent between 2013 and 2014.

Following a violent past under the racist apartheid system, democratic South Africa has suffered from high rates of all types of violent crime.

One of the most violent areas is the Cape Flats, a huge sprawl southeast of the center where many nonwhite people were forcibly removed during apartheid.

St. Louis leads the four American cities on the list, with a harrowing series of shootings, stabbings and hammerings to death in 2014.

The Missouri city has been home to gangs since Prohibition days when mafia bootleggers such as the Green Ones operated. More recently, gangs such as the Black Mafia have gained ground selling drugs.

The homicide rate is based on the murders and population of St. Louis city. That does not include the county, where police officer Darren Wilson shot dead Michael Brown in Ferguson in August, sparking protests.

The other American cities on the list, in order, are Detroit, New Orleans and Baltimore.

Add to that Mexican drug cartels like the Zetas taking refuge in the Central American country and working with local gangsters.

Guatemala suffered from one of Latin America’s most brutal civil wars, which claimed the lives of an estimated 200,000 victims over 36 years. Despite a peace accord in 1996, many citizens are still armed.

Jamaica has long suffered from high homicide rates as gangs known as “posses” fight to control its slums.

The posses have their origins in the 1970s political battles between the leftist People’s National Party and conservative Jamaican Labor Party.

They’re now involved in smuggling marijuana and cocaine to the US, Canada and Britain as well as shaking down businesses in their communities.

The murder rate fell after the 2010 arrest of kingpin Christopher “Dudus” Coke and many of his gunmen. But the rate has since rebounded as new criminal players vie for power.