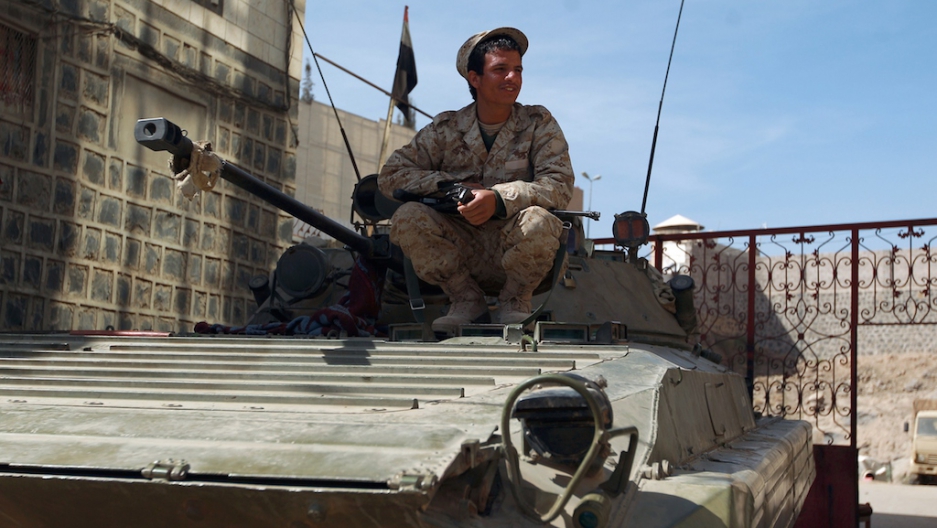 A Shiite Huthi militiaman wearing uniform confiscated from the Yemeni army sits on a government tank in the area around the presidential palace in the capital Sanaa, on January 22, 2015.
Credit: Mohammed Huwais
Share

In a speech broadcast to homes across Yemen on Tuesday evening, the leader of the group Ansar Allah, known locally as the Houthis, reassured millions of Yemenis that despite the rumors of a possible coup in the capital city of Sanaa, Abd Rabo Mansur Hadi was still their president.

But how did the leader of a political movement find himself in the position to disseminate such important information? How has that man, Abd al-Malik al-Houthi, become one of the most powerful figures in the nation?

Ansar Allah was founded in the early nineties in Yemen’s northern province of Saada. Then known as the Believing Youth, residents of Saada had grown tired of the meddling influence of their neighbor to the north, Saudi Arabia.

The Houthis are Zaydis, a sect of Shia Islam prominent in northern Yemen, and the rapid spread of Wahhabism throughout the country had begun to worry community leaders.

In the post-9/11 world, the Houthis grew more and more concerned with the relationship then-President Ali Abdullah Saleh was fostering with the United States. Already wary of foreign influence in Yemen, the Houthis began making their grievances known in the capital Sanaa.

Tensions between the burgeoning political movement and Saleh reached a head in 2004 when the government sent troops into Saada to arrest the then leader of the Houthis, Hussein al-Houthi. During that attempted arrest, al-Houthi was killed by government forces and an insurgency was launched against the president and his network of powerful sheikhs and generals.

In the years following al-Houthi’s death, this fringe group of Zaydi revivalists began their transformation into a political movement and a fierce fighting force. In Sanaa, Saleh sought to represent the Houthis as remnants of the Zaydi Imamate of the early and mid-20th century, where decedents of the Prophet Mohammed ruled with impunity in a religious monarchy.

But in spite of the carnage inflicted upon Saada in six years of war, the Houthis endured. In November 2009, in what the Yemeni military code-named “Operation Scorched Earth,” fighting between the Houthis and Yemeni security forces spilled into Saudi Arabia.

By January, the Saudis had had enough of the Houthis — they agreed to a truce and Abd al-Malik and his fighters withdrew back to Saada and relinquished the territory they had seized from Saudi Arabia, land that was historically Yemeni.

As popular protests calling for the ouster of President Saleh broke out across Yemen in 2011, al-Houthi saw another opportunity. Leaving their weapons behind, the Houthis joined the youth protesters in the capital.

When their nemesis — the president — stepped down from his 34-year-reign, the Houthis sought further inclusion in the government, morphing into a political organization — one that happened to command tens of thousands of some of the most hardened fighters in the entire region.

As Yemen attempted to recover from nearly two years of political turmoil, the Houthis had an opening to assert themselves as more than just religious revivalists with a penchant for staying alive in the face of impossible odds.

With Yemen’s revolutionary youth totally marginalized, the country’s usual suspects battled for control of the post-Saleh political landscape. The Houthis represented an alternative to the old guard of the Saleh era and their influence began to expand in the capital. In 2012, banners emblazoned with the Houthi war cry, or sarkha, began making regular appearances in the capital.

“God is great, death to America, death to Israel, a curse upon the Jews, victory for Islam,” the Houthi sarkha reads.

As their influence grew, Houthi fighters began pushing out of Saada and into other provinces north of Sanaa. In two years, the Houthis had seized large swaths of Amran and al-Jawf. By the end of last year, the fringe religious insurgency that once faced starvation and extinction had arrived at the doorstep of Yemen’s capital.

In September of last year, rather than lead a fractured and overworked army into war, the country's new president, Abd Rabo Mansur Hadi, signed a peace agreement with the Houthis that many in Yemen considered a surrender.

In near total control of the capital, the Houthis and the Hadi government coexisted in a tenuous peace. Houthi checkpoints began to dot the city. Even more curious, Yemenis began to accuse the Houthis of cooperating with their one-time nemesis, Ali Abdullah Saleh. As part of a 2011 Saudi-brokered agreement, Saleh relinquished power but maintained immunity and freedom to remain within Yemen.

Often dismissed as mere conspiracy theories, many western leaders refused to believe that Saleh was cooperating with Houthi leaders — after all, that would have completely undermined their diplomatic efforts to negotiate Saleh’s ouster from power in 2011.

But in November, the United Nations placed sanctions on Saleh as well as two Houthi leaders and accused the former president of conspiring with the Houthis to sabotage the stability of the fledgling government.

“As of fall 2012, Ali Abdullah Saleh had reportedly become one of the primary supporters of violent Houthi actions in northern Yemen,” read a statement issued by the United Nations last year.

By January, skirmishes began breaking out at various checkpoints throughout the city. The Houthis took Ahmed Bin Mubarak, a close aide to Hadi, into their custody. By Monday morning, fighting between the Houthis and government forces had spread across the city.

When the Houthis seized control of the presidential palace, many assumed that coup was underway.

But on Tuesday, Abd al-Malik al-Houthi addressed the nation to condemn corruption and foreign influence. He reassured Yemenis that what was taking place was not a coup and that Hadi was still the president.

The Houthis’ intentions remain unclear but their power and influence seem virtually unstoppable. Al-Houthi has now set his sights on Marib — home to a great deal of Yemen’s oil and electricity infrastructure. But Marib’s Sunni tribesman stand in his way.

On Wednesday, Hadi and al-Houthi agreed to yet another peace deal in which both parties pledged to uphold the previous peace deal. Hadi will remain president but Yemen’s true power brokers are continuing to operate unchecked.