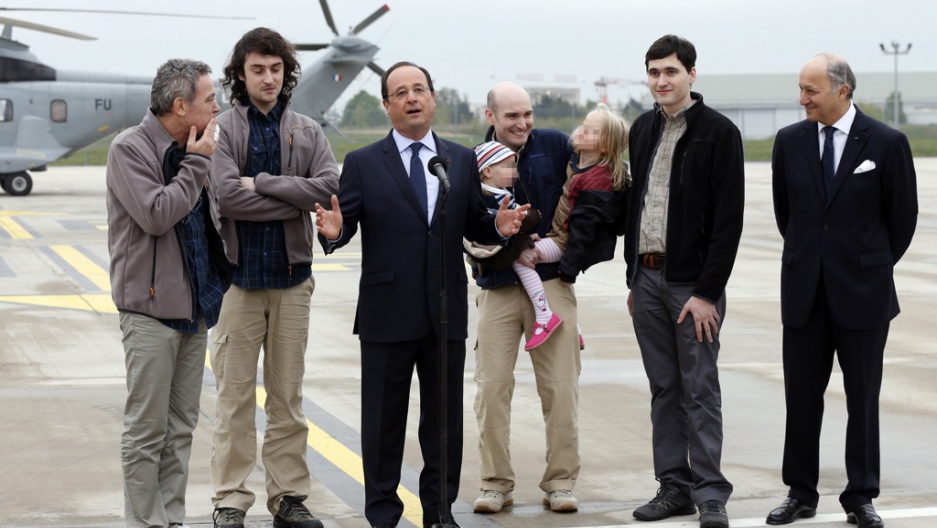 Editor's note: This article was first published on Jan. 21. The story is developing and the article will be updated to reflect new information.

On Jan. 20, Islamic State militants released a video in which they threatened the lives of two men they identified as Japanese nationals Haruna Yukawa and Kenji Goto. IS sent a clear message to Tokyo — we've got two of your own and you've got 72 hours to deliver $200 million in ransom money or the next video will end the same way it did for James Foley, Steven Sotloff, Alan Henning, David Haines, and Peter Kassig.

It's been more than a week since then and conditions have changed.

On Jan. 25, IS released a second video that showed Goto holding a photograph that seemed to show the decapitated body of Haruna Yukawa. And IS had a new demand. Instead of ransom money, they were offering to free Goto, a 47-year-old journalist, in exchange for the release of Sajida Mubarak al-Rishawi, an Iraqi woman currently imprisoned in Jordan for her role in a terrorist attack in Amman in 2005 that killed more than 57 people.

Then, on Jan. 27, IS released a third video. This time, Goto was holding a photo of another hostage, Jordanian pilot Lieutenant Muath al-Kasaesbeh. IS threatened to kill al-Kasaesbeh in 24 hours if Jordan did not release al-Rishawi.

Today, Jordan publicly agreed to the swap. There is no word yet on whether Goto will factor in the exchange.

This developing story has reignited debates about what countries should do when their citizens are kidnapped by terrorist groups. It's a debate that's gained particular intensity since the rise of IS and the execution of James Foley, a US journalist for whose life the militants demanded a ransom of $132 million.

Swapping prisoners introduces another element to consider — the United States doesn't pay ransom, for example, but chose to swap five Taliban prisoners for Army Sgt. Bowe Bergdahl — but the question most often asked is still about money:

Should nations pay ransom when organizations like IS, Al Qaeda, and other terrorist groups kidnap and threaten to kill their citizens?

More from GlobalPost: Here’s what James Foley meant to us

It's a complicated question, even if places like the United States and United Kingdom answer it with black-and-white policies. When it came to Foley, for example, the US not only refused to pay IS but also threatened to prosecute Foley's family if they tried to raise the money themselves. That decision might strike some people as outrageous in cases where the alternative is certain death. Your heart might say: How can the leaders of the most powerful nations on Earth stand by and do nothing as terrorists behead their citizens when a wire-transfer would free them? But then your head might say: Ransom payments provide millions of dollars for terrorist operations and practically guarantee that terrorists will continue kidnapping and ransoming for as long as it keeps working.

More from GlobalPost: How Peter Kassig’s friends are choosing to remember him

In short, there's no easy answer.

Tokyo promised that it woudn't pay ransom for Goto and Yakuwa. That decision put Japan in line with the US and UK and is in keeping with a recent G8 agreement and UN Security Council Resolution. Yakuwa is now dead, and Tokyo seems ready to negotiate for Goto's release. A prisoner exchange is the public face of the negotiations, but there's still the possibility of a back-channel ransom payment, if history is any guide. Should Japan decide to pay, they'll be joining these other nations who have also allegedly paid IS to release their citizens. All of them deny having done so.

In April 2014, four French journalists — Didier Francois, Nicholas Henin, Pierre Torres, and Edouard Elias — were freed after being held for more than 10 months in Syria. All four went missing in June. Henin and Francois were reporting for Europe 1 radio when they were captured together en route to Aleppo. Henin and Torres were kidnapped later in Raqqa. At the time Henin was working for Le Point magazine and Torres for the French-German TV station Arte.

France insisted that it had simply negotiated their release and not paid ransom, but a German magazine, citing NATO sources, claims the French defense minister hand-delivered an $18-million ransom payment to Ankara, Turkey.

Marc Marginedas gives a radio interview in May 2014.

IS freed three Spanish journalists in March 2014 after holding them captive for around 6 months. First was El Periodico’s seasoned war reporter Marc Marginedas. Later in the month, Javier Espinosa, a correspondent for El Mundo, and Ricardo García Vilanova, a freelance photojournalist, were also released.

A spokesperson at Spain’s foreign ministry didn’t confirm or deny that the country had paid ransom. She did say that they used “maximum discretion.”

Federica Mogherini, Italy’s Minister of Foreign Affairs, speaks to the press about the release of Federico Motka on May 27, 2014.

In May 2014, Italy reportedly spent around $7 million to free Federico Motka, a Swiss-Italian aid worker who was kidnapped in March 2013. At one point, Motka shared a cell with David Haines, the British security advisor IS executed in September.

Reuters, citing German media, reports that that German government paid an unknown sum to IS to secure the release of an unnamed German national — a 27-year-old man from Brandenburg who was kidnapped while traveling through Syria in 2013. The New York Times lated reported that the man’s name is Toni Neukirch. The German government denies paying any ransom.

Five aid workers with Doctors Without Borders (MSF) went missing in northern Syria in January 2014. They were freed five months later. There's very little public information about the case, but the New York Times reports that they were held by IS and released for ransom payments.

If you want to know more about the fates of IS hostages, including those who've reportedly been ransomed, you can consult this helpful New York Times infographic.